Today’s AVCX is a contest puzzle from Francis Heaney.  We’ll have a writeup available on August 10, once the submission deadline for answers has closed. 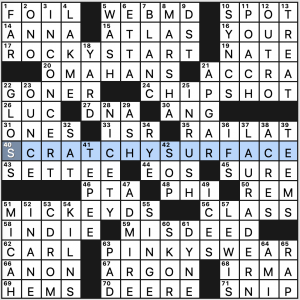 So yeah. That middle one. With SCRATCHY_URFACE, and that blank as my last letter to fill in the grid, my initial reaction was to make it SCRATCH YOUR FACE which is kind of a phrase, I guess. I was ready to lay into the puzzle for re-parsing this themer where the other entries don’t. But the actual answer was certainly no better; the other entries are all in-the-language, common phrases. This one, not so much. Googling “scratchy surface” in quotes, I get a paltry 13,700 hits. Yikes. (For the record, “scratch your face” gets 1.4M hits.) Maybe replace it with LUCY LAWLESS [Linus’s sister run amok?]? An 11-letter central entry is harder to contend with from a construction standpoint, but it certainly could be done.

That huge anomaly aside, this was a fun theme that landed right up my alley. At first, I thought they were all just cartoon characters, but then, applying the title, I realized they were all parts of cartoon duos, which made the concept tighter and more impressive. It’s just a shame about that one entry. And ANNA clued as Elsa’s sister probably should have been changed.

Moving on, did anyone else go with IN CAHOOTS for the clue [Acting jointly]? (Actual answer: IN CONCERT.) Also nice to see LAURA DERN get her full name in a grid (37d, [Oscar winner for “Marriage Story”]). NICETY is nice, but not being an opera guy, I had never heard of LAKMÉ [“Bell Song” opera]. And SOP clued as [Conciliatory gesture], just ain’t in my wheelhouse. 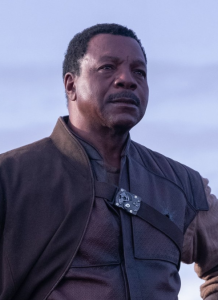 CARL Weathers in The Mandalorian 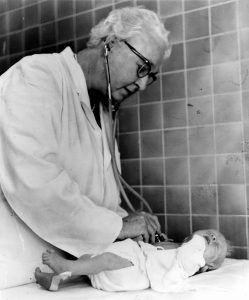 On the whole, I definitely like this theme and the concept behind it, but I’m still shaking my head at that middle one. 3.4 stars. 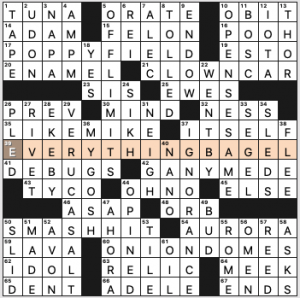 The theme is not to my taste, flavor-wise. The revealer is an EVERYTHING BAGEL, 39a. [Breakfast order suggested by the answers to the starred clues]. I prefer a plain or egg bagel, with a schmear of cream cheese, and it’s always nice if you’ve got some fresh berries to add those on top.

So two themers end with the bagel appliqué and the other two start that way. Balanced.

This theme has just 2 squares fewer than yesterday’s NYT theme, I think, and a lower word count, and yet the fill is so much smoother. The themers all have their space in the grid, and there’s still room for longer fill like GANYMEDE, CLOWN CAR, OFF LIMITS, SMASH HIT, and LIKE MIKE.

Four stars from me, despite the missing SEEDs in two theme clues. 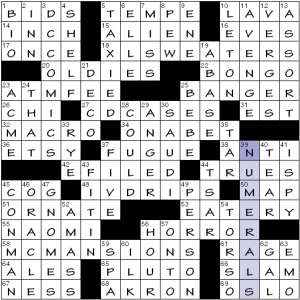 Simple theme, and it seems familiar. One of those that seems like it’s been done multiple times previously—which is not a knock on this puzzle.

Briefly for the rest, as alas I have much to do today:

Good morning fiends! (Is that what we call you? Or are we the fiends? Unclear.) Today we have a beauty from Natan Last, with 4 long acrosses that are fun and fresh. I was on track for this to be a relatively easy solve, and then could not figure out how to fill in my final square, and spent a lot of time running the alphabet in my head trying to figure out the final letter. But other than that moment, this was a thoroughly enjoyable solve! 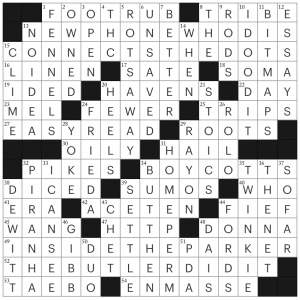 The sparkly long entries we have today are: NEW PHONE WHO DIS / CONNECTS THE DOTS / INSIDE-THE-PARKER / THE BUTLER DID IT. I was not familiar with an “INSIDE-THE-PARKER” and went back and forth between E and H for that second to last letter (“INSIDE-THE-PARK-HR” seemed just as plausible), but the crossing with THE NET pulled me through. I *love* NEW PHONE WHO DIS. For those unfamiliar, this is a meme, not just a random thing a person could text. I think the first time I became aware of its memedom was Seth Meyers’s 2014 opening monologue from the Emmys, or possibly from the Mindy Project (see pic)? THE BUTLER DID IT is also a delightful entry.

Overall, very fun solve with exciting long acrosses and fresh clues for many of the more standard entries. A lot of stars from me!

P.S. – If you are into solving crosswords, you should consider signing up for Lollapuzzoola, a crossword tournament held each year on a Saturday in August! This year, on August 15, you can join (at least) 500 of your closest internet friends to compete (at whatever pace you want!). The constructing roster this year includes new New Yorker constructor Robyn Weintraub, fiend blogger joon pahk, Brooke Husic, Sid Sivakumar, Stella Zawistowski, and, uh, me! So if you’ve ever read my reviews and been like “who does she think she is, criticizing other peoples’ puzzles,” come solve mine and then tell me how many stars it gets (or doesn’t get!). 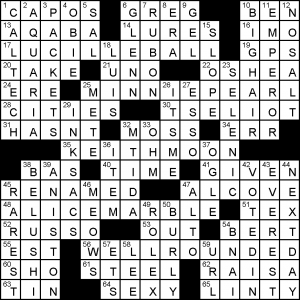 Today’s puzzle is a tad unusual. It features people who are WELLROUNDED, but in the sense that their surname is something round – a ball, a pearl, a moon and a marble. Another commonality is their early to mid 20th century centre of gravity: KEITHMOON is the most recent, and he’s not.

Also worth noting, out of several more mostly common-enough names, Ms. RAISA Gorbechev has not been forgotten!