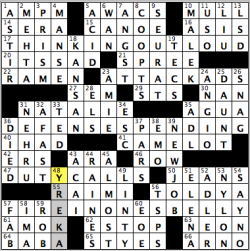 Hello everyone! There’s another heatwave taking a grip in parts of the country, including the Northeast, so I hope you all stay cool, stay safe and have AGUA at the ready (35A: [Water, in Mexico])!

Today’s puzzle has a couple of nice interesting twists in the theme. First, the theme entries all are well-known phrases in which the first word can also come after the words “line of.” Second, the entries are clued in a way that makes the answers seem as it is a work-related activity…or an occupational no-no!

Love the Middle Eastern/Asian diversity with a number of the names mentioned in the grid. Let’s count the ways: METHA (2D: [Maestro Zubin ___]), NATALIE (31A: [“The other Boleyn Girl” actress Portman]) crossing NEHRU (31D: [India’s first prime minister]), MALEK (10D: [Rami ___ (Oscar-winning “Bohemian Rhapsody” actor)]), RAIMI (55A: [“Spider-Man 3” director Sam]) and LIU (12D: [Lucy of Elementary]). Pretty sure this was the first time coming across AWACS in a grid (5A: [Aircraft surveillance acronym]), and in that area also was the lively fill of COOPTS (8D: [Appropriates]). Then there’s the eye-popping, tongue-twisting fill of YREKA, which I learned about years ago when I applied for a TV reporting job in nearby Klamath Falls, Ore. (48D: [Northern California city]). The random, obscure cities one gets to know when starting a news reporting career!!!

“Sports will make you smarter” moment of the day: LSD (13A: [Psychedelic drug)]) – Ever heard about the story of a baseball pitcher who threw a no-hitter while high as a kite? On June 12, 1970, Pittsburgh Pirates hurler Dock Ellis threw a no-hitter in San Diego against the Padres one day after, according to Ellis, he got high on LSD and other drugs in Los Angeles while visiting a friend. In telling the story, Ellis woke up the next day and said that he thought that his scheduled start was one day later, but then had to book a flight to San Diego from Los Angeles upon realizing that his start was in mere hours after waking up from his hangover. Ellis arrived at the ballpark 90 minutes before the schedule start time, and proceeded to make history by holding the Padres hitless while walking eight batters and hitting another batter. Here’s a hilarious quote attributed to Ellis in describing that day, a day in which he said he could not feel the ball or see his catcher clearly throughout the contest.

I started having a crazy idea in the fourth inning that Richard Nixon was the home plate umpire, and once I thought I was pitching a baseball to Jimi Hendrix, who to me was holding a guitar and swinging it over the plate. 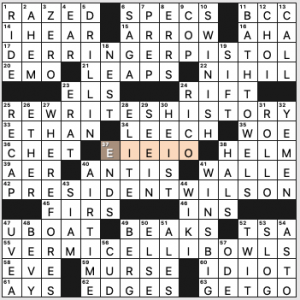 Ade took note of a heat spell so I’ll mention the Midwestern derecho (storm with particularly high winds) that walloped Iowa midday and then moved through Chicago in late afternoon. My block was scantly roughed up, but neighboring blocks and other neighborhoods saw plenty of uprooted or broken trees. (And now it’s much cooler out!) Hope you’re safe in your part of Solverland.

I had no idea what the theme was after finishing this puzzle, having not bothered with the clue for 37a since *IEIO’s first letter was obvious. Turns out that’s the revealer: [Refrain in a children’s song … or a literal feature of 17-, 25-, 42- and 55-Across]. EIEIO are the vowels present, in that order, in DERRINGER PISTOL (I think my dad had one and I may have shot it at the range?), REWRITES HISTORY, PRESIDENT WILSON (known racist!), and VERMICELLI BOWLS ([Vietnamese noodle salads]?? I’ll take your word for it, as I’m a rice fan more than noodles).

Grid’s pretty smooth considering the generous 65 theme squares. NIHIL and plural AYS are not great, especially for a Tuesday puzzle … and 31d. [Viking who was the first ruler of Normandy], ROLLO?! Yeah, no. This is not a name we learn in school. Maybe in Scandinavia, or in Normandy, but not here.

Our theme is CROPS UP (44d, [Arises, and what’s seen four times in this puzzle]). Each of the other vertical themers is a common word or phrase with a food crop in the circled letters going upwards. 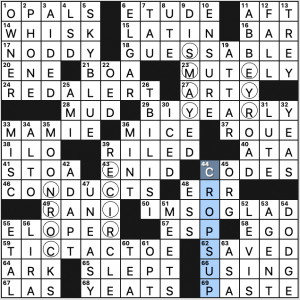 Standard yet solid hidden word theme. It’s usually better when the hidden word can span more than one word as in ABBEY ROAD and MOON ROCKS. It would have been nice if the other two entries got similar treatment. (I found STONE CIRCLE and CHARLES MAYO (of the Mayo Clinic) as a symmetrical pair that could’ve worked.)

The fill is a mixed bag. It was fun trying to sort out TBILISI since the first I is silent every time I’ve heard it pronounced. TIC TAC TOE, RED ALERT, “I’M SO GLAD,” CONDUCTS, GUESSABLE, and SKY BLUE—all good. BI-YEARLY is ho-hum, but it provides the B in TBILISI and crosses two themers, so what are you gonna do? But I found myself sighing at crusty fill such as ILO, STOA, ELOPER, ATTAR, and ROUE. And then there’s still plenty of the less-objectionable but common crosswordese: ETUDE, ENE, OED, AMI, ATA, ESS, ASA, ETAL, and RANI. It’s a trade-off, but in my book, I’d rather see less of this clunky stuff even if it meant sacrificing some of the flashy stuff. 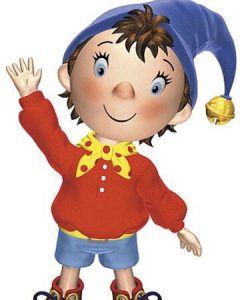 NODDY from the BBC

I got NODDY off the crosses, so I didn’t even see the clue [Simpleton]. That’s new to me. The only NODDY I know comes from the telly in Britain. (Oh! Turns out NODDY is a creation of author ENID Blyton; that would’ve been a good tie-in.)

Not a bad theme, but there were some missed opportunities and the gluey fill bogged it down somewhat. 3.25 stars.

Paul Coulter is back!

THEME: Phrases that are “angry” are aptly attributed to different careers. 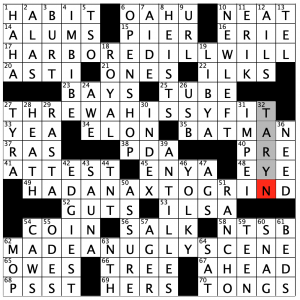 Familiar theme type with the “apt phrase for a person with such–and-such a job” approach, but I like this theme type, and in Paul Coulter’s hands it’s executed well and fun to solve.

I really had trouble with this one in two spots:

Up north, I REALLY wanted HARBORED A GRUDGE, and I wasn’t confident with NEW LEFT or ERIK, so it was difficult to change.

More south, I had INSURE for ASSURE (both work for the clue [Guarantee]) and was so confident with my mistake that it took forever to see HAD AN AX TO GRIND (though if I entered that first I probably would’ve avoided the problem altogether).

Still, everything is fair, it just took me much longer than usual! Nothing wrong with that. Thanks, Paul! 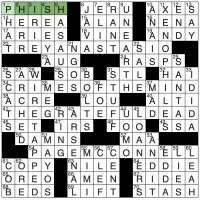 We have a treat this week! The first reprint is actually the first ever Jonesin’ puzzle, from May of 2001! What is the theme of Matt’s first puzzle? You guessed it: slightly obscure pop culture!

PHISH is still around all these years later, I believe. I actually saw them in concert years ago, opening for The Beastie Boys in Kalamazoo, MI! I couldn’t name a single song they sing. Maybe I will find them on my Spotify later! In the ensuing hundreds of puzzles, Matt has often showcased his love of indie/alternative/rock/folk/whatever music, so this first puzzle is not a surprise! If you are a fan of Phish, I apologize for my ignorance. Maybe they are bigger on the west coast! 4.4 stars for this only slightly dust gem!

More stuff (some of which is also obscure!):

That is all! Another Jonesin’ reprint coming next week! 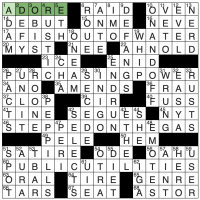 This puzzle reminds me that I have a bill to pay!

Perhaps you are slightly reminded of a game of Monopoly as well? No? Yeah, maybe not. Nice simple theme, yet beautifully executed with all the themers being a full 15-letters long. 3 minutes for me; would be even faster if I knew how to get Xword to skip to the next open entry! 4.2 stars today.