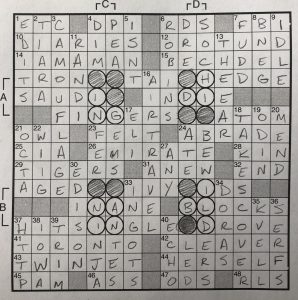 This was a blast to solve, even if it played a little more like a variety puzzle than a straight on crossword.  If you tried to solve this digitally, this gave you a note about how to enter black squares into the grid (via the @ symbol).  I took one look at that and printed things out – apologies if you can’t read my penmanship.

As the puzzle states, “You’re outside looking for something, but the fog is making it difficult.”  The 24 circled squares represent foggy patches where you need to figure out what’s a black square and what’s something that goes in one of four sets of clues (A, B, C, and D) that are provided in no particular order.  Once those are in the grid, you’re able to spell out “where you are” from the circled letters: HIDING IN A BLIND 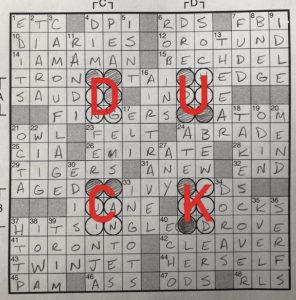 I had a hunch I knew what the final answer was from that clue, as someone who grew up with extended family that hunted in the wilds of Minnesota, but you can also read the foggy areas in a different way to get the final answer of what you’re hunting.  The first clue provided in section A, “They’re used when reading Braille”, plus the 2×3 shape of the foggy areas, suggests that each of these could be read as braille letters, counting the black squares as the raised bumps.  Lo and behold, treating each of those as a Braille letter gives you DUCK.  CAMOUFLAGE and TAKES COVER in the down fill were a nice nod to what’s going on.

This had Francis’ usual immaculate construction – the areas where you had to sort out what answers went where didn’t have too many humdingers, and anyplace that was tricky was helped by the clued answers filled in around those areas.

It’s DORA‘s Christmas, not Dora’s Navidad, that features “No Swiping on Christmas”.  Having listened to this, I see why it hasn’t entered the modern holiday song canon.

I wasn’t super familiar with the phrase “ODS bodkins!” but once I read that it dates back to Shakespeare, that made a heck of a lot of sense.  Elsewhere in learning things from the crossword: IOWA is the “northernmost state comprised entirely of Louisiana Purchase land”.