The term DOUBLE PLAY (62a, [Baseball feat, and a clue to this puzzle’s them [sic] answers]) takes on a theatrical meaning as the other themers hide a musical within a musical. 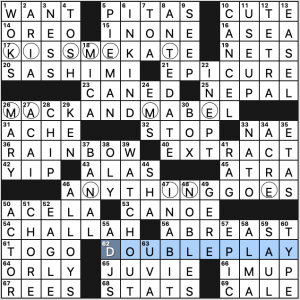 I don’t know musicals all that well, so some of this was lost on me, but wow, these are some impressive finds! I would never have guessed you could find a musical’s name inside another musical’s name, let alone three of them, let alone have them fit in a grid symmetrically. If they’re not all top tier, universally-known productions, that’s a lesser concern. At least they all pass the bar of having at least one Tony nomination. A very cheeky theme, well executed  and with a perfect revealer and title.

Interspersed with that very cool theme we find some very nice fill: SASHIMI, EPICURE, PIEMAN, RAINBOW, EXTRACT, NOBLES, CHALLAH, and “WATCH OUT!” I always liked the word ANTEDATE because it sounds so snootily full of itself, and similarly, BANAL is more fun than BLAND which was my first choice. I did not know the two names at the bottom, Roger REES and J.J. CALE, but the crossings sorted them out easily enough. 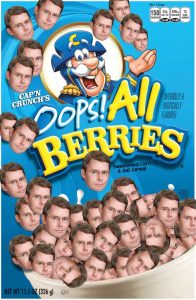 An impressive theme (despite my knowing very little about musicals) and strong fill make this puzzle a winner. 4.25 stars.

Check this out. It’s dazzling in several senses. I couldn’t watch it without smiling: Scott Joplin’s “Maple Leaf RAG.” 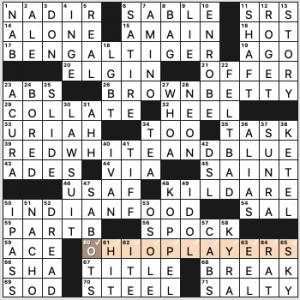 Hey, hey! Ade is the second member of Team Fiend to have an NYT puzzle in the past week! Ade is wont to say “Sports will make you smarter” so it wasn’t hard to guess that the BENGAL TIGER themer had to do with the Cincinnati Bengals and that other team names might also pop up in the theme. Perfect theme to come from Adesina’s fertile mind.

Not included: The Cleveland Cavaliers (NBA) and Columbus Blue Jackets (NHL), nor the two MLS teams.

Four stars from me. Looking forward to more puzzles with your cruciverbal voice, Ade!

Good morning, everyone! Quick writeup today because life, but the tl;dr is, this is a fun puzzle that taught me something new about queer history and I loved it! The slightly longer version is: 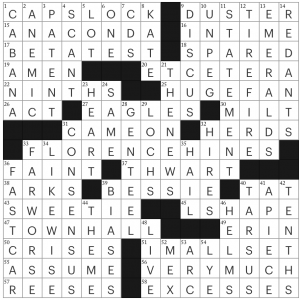 I had never heard of FLORENCE HINES, but in typical Agardian fashion, the crosses were all perfectly gettable, so instead of feeling flummoxed by the unfamiliarity of the entry, I was thrilled to learn about a pioneering black drag king and then have a reason to go read the internet about early vaudeville drag kings, something I had never known existed. Very cool!

Other long stuff included STATEMENT and CONSENSUS, both with A+ clues [Clothes might make one] and [One person alone can’t reach it]. We also had CAPSLOCK/ ANACONDA / BETA TEST / I’M ALL SET / VERY MUCH / EXCESSES in the NW and SE corners. Favorite clue there was [Common culprit behind an incorrect password] for CAPSLOCK. So true to life!

Overall, lots of stars for this puzzle. Super clean, excellent cluing, learned a new thing– that pretty much checks all of my boxes! 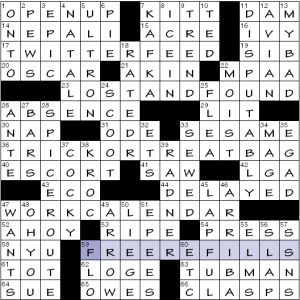 Not sure I completely understand this theme.

As you can tell, to me at least the theme feels disjointed and unconvincing, but I’m willing to entertain further explanations, so please feel free in the comments.

And some of Brian Bromberg’s: 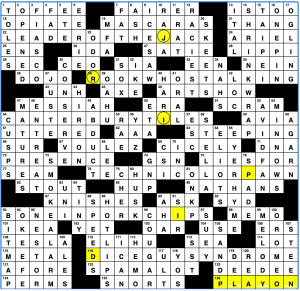 I appreciate what’s going on in this week’s AVCX puzzle, even if it kind of didn’t do anything for me:

As for the mentioned hidden message – replacing the circled letter (or highlighted letter, in my grid above) with the letter that makes the fill a more well-known phrase (LEADER OF THE PACK, LOOK WHO’S TALKING, CANTERBURY TALES, TECHNICOLOR YAWN, BONE-IN PORK CHOPS, and NICE GUY SYNDROME), you get PLAY ON.  I noticed the all-game themed clues on the theme entries (for one version of “play”), and a similar sports and theater-heavy touch on the cluing of other fill (for other types of “play”) was nice, but somehow that all added up to a solve that was Just Okay for me.  It’s a fine crossword. It was a fun challenge to start my day.  But the payoff on the theme didn’t quite work for me.

Handel’s MESSIAH had its debut in Dublin 1742. Here’s a nice version of its Hallelujah Chorus from the Royal Choral Society. 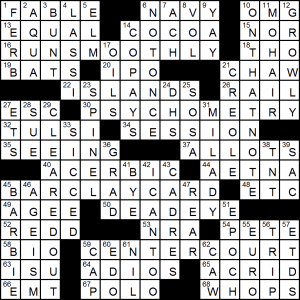 CENTERCOURT is an interesting starting point for a theme idea. However, I’m not sure the rest of this theme’s execution holds up well. For starters CLAY court and CENTERCOURT are the same kind of court, which feels like a foul. Even HOME court is still in the realm of sports. The third is MOOT court which is apparently a legal term; TBH, I’ve never used it, but it is a thing. Also, it seems some effort was made to place the words more or less in the centre of the phrases, but all the words are four letters and the answers are eleven so you get an awkward four/three split. Personally, I also didn’t know PSYCHOMETRY, which is OK, even though after reading more I still don’t seem know what it is. There are words in its definition, but they don’t seem to say anything: divination of facts concerning an object or its owner through contact or proximity. Huh?

[Urged to attack, with “on”], SICCED. Answers like this and SICEM I find disturbingly violent. Am I the only who finds them so?