This duo teamed up in their NYT debut a few months ago, and now they’re making their WSJ debut. Congrats, guys. This was a good one!

The revealer is at 36d: SHAPES UP [Gets fit, and a literal hint to four answers in this puzzle]. Each of the other theme answers is a phrase that includes a shape, and while the main answer is in the Across direction, the shape word bends upward. 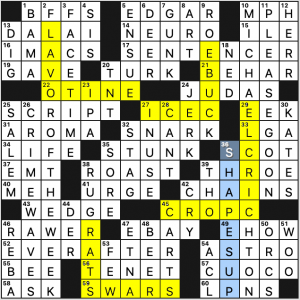 Despite my failure at the end, I’m super impressed, and this was a lot of fun. I’m especially impressed by all four crossing answers that supply the shapes. What great finds!

And the fill was lively throughout. SENTENCER and RAWER aside, I really liked CRIME WAVES, “PLEASE GO ON,” FACETIME, EVER AFTER, and SNARK. I did not know Kaley CUOCO of The Big Bang Theory nor CANT as mentioned above.

Cluing felt fresh too, and kept me on my toes. I noted these:

Today’s NYT from Jon Olsen had a nice AHA that took me a second to catch on to: 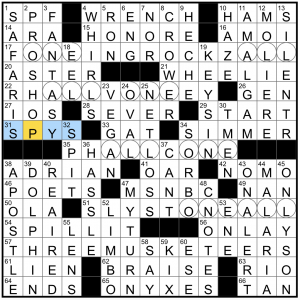 I may be alone on this one, but I could have done without the circles in the squares?  Once I figured out one switcheroo, I went through and immediately filled in the remaining sets, which helped me slash through this grid – if I hadn’t had those handholds, there would have been a little bit more to chew on.

There was something particularly tricky about the upper left of the grid on this one – I’m not familiar enough with constellations to know that ARA is by Scorpius’ tail, and HONORE de Balzac isn’t on my reading list.

did this start playing in anyone else’s head once they entered LIMBO in the grid?

It’s Jenni subbing for Jim Q who is having dental surgery. Bet he’d prefer to be writing this.

Every time I do the Universal, I think “I should do this more often” and promptly forget about it until the next time I do one. I liked this puzzle a lot. I figured out the theme about halfway through and it was a fun “aha!” moment.

The theme entries do not make any sense at first glance. 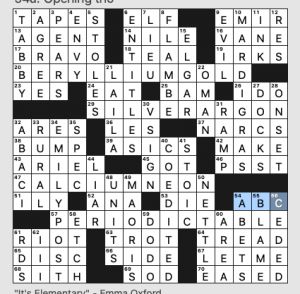 The correct answer to each clue can be found in the symbols for the elements: 20a is BE AU, 29a is AG AR, and 47a is CA NE. There’s also a revealer: 57a [Chart whose symbols are needed to decode the starred entries], PERIODIC TABLE. I thought all the crossings were fair and enjoyed the solve. Nice!

What I didn’t know before I did this puzzle: that ASICS come from Japan and that EMILY POST was named the second most powerful woman in America in 1950. That’s – something. 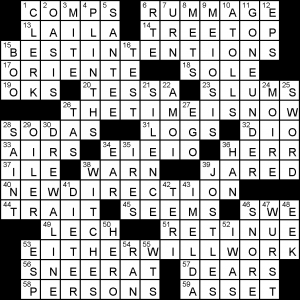 I’ve seen this puzzle theme a few times before – the vowel pattern EIEIO is found in the theme answers; I expect this to resonate better if it’s your first time around. All four answers seemed to have another commonality in that they sound vaguely like they come from a motivating speech? BESTINTENTIONS, THETIMEISNOW, NEWDIRECTION, EITHERWILLWORK.

Brendan Emmett Quigley crossword (No. 1287), “Up With People”—Ade’s take 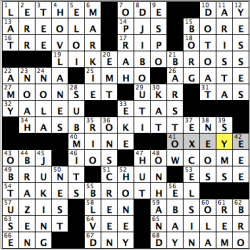 Brendan Emmett Quigley crossword solution, No. 1287: “Up With People”

Good day, everybody! Hope you all are doing amazing today and getting ready for the weekend!

Today’s puzzle has a very intriguing (confounding, maybe?) add-and-subtract element to it. In it, the three longest entries are puns created by adding the letters “BRO” consecutively inside of the phrase. The “BRO” is actually grafted from an entry immediately below each of the themes, with those answers missing the “BRO” and causing those answers to not make any sense with its corresponding clue.

The solve itself wasn’t that too much of a problem, but figuring out the multi-layered approach to the theme took much longer. Only after knowing that “LEN” had to be wrong for its clue was when I realized what was happening. If anything, the toughest entry for me to get was the first clue, LETHEM (1A: [“Motherless Brooklyn” author Jonathan]). As always, references to Africa will give any puzzle a bonus from yours truly, and that’s the case with DJIBOUTI, whose capital city is….Djibouti (8D: [Horn of Africa nation]).  Djibouti’s paralleling entry, ON SCREEN, was also a very lively and fun entry (36D: [Streaming, say]). At first, when I thought BEQ might have messed something up with the LeBron/Len entry, I wanted to call him up and ask him if he actually meant to refer to Alex Len, currently an NBA player who hails from UKR (29A: [Kiev’s nat.]).  I know that the term MOONSET exists, but took me a bit to believe that was correct when I put it in (27A: [Lunar event]). It’s not “Call Me Ishmael,” but the line referenced in the clue to BARSTOW definitely ranks up there as one of memorable first lines of any book (21D: [“We were somewhere around ___ on the edge of the desert when the drugs began to take hold.” (opening line in “Fear and Loathing in Las Vegas”)]). Loved the solve, and thank goodness I got to know sooner or later what was the trick. Make sure to read the title when you’re in the midst of a solve and you’re not sure what’s going on!

“Sports will make you smarter” moment of the day: DYNAMO (68A: [Energetic person]) – Major League Soccer, the highest-level pro soccer league in the United States, has just restarted, which means you might be hearing about the Houston DYNAMO, one of the teams in MLS. The Dynamo, which was added to the league and played its first season in 2006, made history by winning the MLS Cup (the league’s championship) as an expansion team, defeating the New England Revolution in penalty kicks in the final. One year later, the Dynamo repeated as league champions. Current basketball great James Harden and boxing legend Oscar De La Hoya are part owners of the franchise.