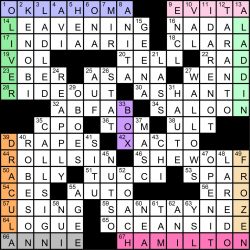 Good day, everybody! I hope all of you are doing well and, for those who participated in the Lollapuzzoola online tournament, I hope that you had lots of fun solving amazing puzzles! And if it was your first time ever competing in a crossword puzzle tournament, welcome to the club!!

Not too long ago, we had a puzzle in which all of the answers creating the perimeter of the grid were dance moves. This time, the answers making up the perimeter are musicals, with BOX being the reveal…and the shape of the grid, of course (33D: [Broadway __ office hits (they’re hidden at the puzzle’s perimeter!)]).

After finishing the puzzle, the first thing that immediately caught my attention the Golden State stack of SANTA YNEZ (59A: [California valley known for its wineries and apple farms]) and OCEANSIDE, with those entries only making me sadder that I, probably, won’t make it out to California anytime soon (65A: [California city with views of the Pacific]). Then there’s the entire stage name of INDIA.ARIE as well that looks great (17A: [Grammy-winning “Chocolate High” singer]). With all of the music in this grid, seeing SHEWOLF is making me think of Shakira at the moment (46A: [Howling female canine]). I DARE NOT try to sing along and attempt to hit some of the octaves that she can bring while on the stage, so I’ll just listen and enjoy (11D: [“That’s out of my comfort zone…”]).

“Sports will make you smarter” moment of the day: ROBESON (40D: [Activist/singer/athlete Paul __]) – A small part of what made Paul Robeson one of the most exemplary, influential, dynamic people to have ever graced the earth was his athletic prowess, which he showed off while a student at Rutgers. Despite the rampant racism, including subject to extreme roughhousing by his own teammates in practice and opponents refusing to play Rutgers due to Robeson being a member of the team, Robeson earned All-America status for his play at end in both 1917 and 1918. Along with those honors, he was a member of Phi Beta Kappa and was the school valedictorian in his graduation class. 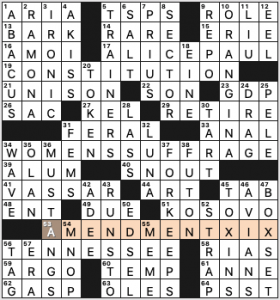 What a great anniversary theme! Olivia honors the 19th Amendment’s centennial with this trivia pack:

It bears noting that Black women didn’t get a confirmed right to vote till the Voting Rights Act over four decades later.

Highlights outside the theme were these representational sparks:

Re: 45d. [What juice cleanses are supposed to get rid of], TOXINS—that “supposed to” is doing the heavy lifting. Your kidneys cleanse your bloodstream of toxins. Juice “cleanses,” colonics, and sticky things affixed to the soles of your feet are not gonna do what the kidneys do for you every day.

Didn’t care for crosswordese RIAS (too tough for Tuesday) or weird noun AVIANS, but I liked the rest of this venture. 4.2 stars from me. 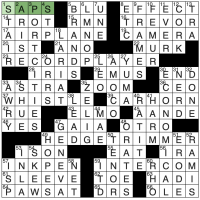 We are still in reprints from Matt’s early Jonesin’ years. This theme is hinting at the Flintstones! These themers all evoke vivid mental imagery for me, as I watched this cartoon a lot when I was younger. (Matt and I are close to the same age, so I get where he is coming from!)

This puzzle is from way back in February 2002, a few years after the motion picture version with John Goodman came out in 1994.

Just a few things this week!

That is all! Another retro Jonesin’ next week! 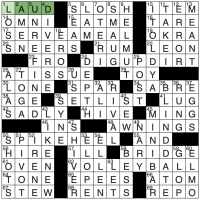 I can’t believe I didn’t see what this was before I got to the revealer at the end!

I thought I knew volleyball pretty well, and I love watching it on TV (it might be a while for new matches this year!), but I am fresh off learning what a libero is from another crossword a few weeks ago. Fun puzzle, as is usually the case from Mark! 4.3 stars.

The theme of this puzzle is very transparent.

THEME: Types of glass are at the bottom of vertically placed common phrases. 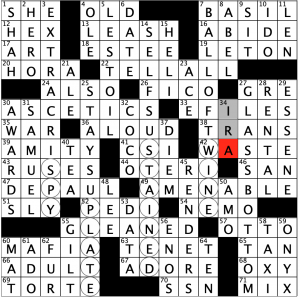 I found this one to be… what’s the word? Funky. That’s it. Not necessarily bad… just funky! Some new things for me were LESTOIL (though now that I Google it, I certainly recognize the product), the freshly clued ABEL, ASCETICS, and MAFIA as a game.

As far as the theme goes, it’s fine, though not entirely consistent in presentation. I prefer when the “hidden word” bridges parts of the phrase as PLATE does in STAYS UP LATE. Also I like when you can’t hear the word as in SPY in EXTRA CRISPY. I don’t feel like SELF SUSTAINED and BALL OF TWINE fully meet either or those criteria. No real harm done though.

And yes, there is the persistent issue that eats at me which is Universal’s willingness to run two different versions of the puzzle: one with circles on this site, and one without for the masses (who would, imo, find more benefit in the visual aid than constant solvers who are likely to download the puzzle from this site). Fortunately, I don’t feel that this puzzle suffers from this pitfall as badly as many others because the word can be found consistently at the end of each themer. Still, they say they’re fixing the problem. I just hope they do it soon. It’s so weird that the only major publication that can’t employ circles in its grid seems to run circle-dependent grids very frequently.

Hey! Two women’s bylines in as many days. That’s nice to see. 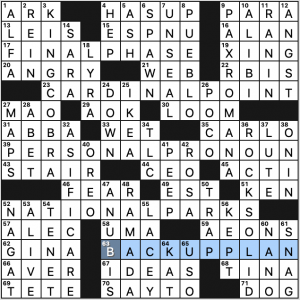 Consistency is the name of the game here and we have all solidly in-the-language phrases with the letter string in question split the same way each time. Works for me.

And what’s even better is the long fill in this grid: KING COBRA, PAX ROMANA, and “AS IF I CARE.” What else can you say but “ROCK SOLID!” And that’s with each of those crossing two themers. Beautifully done. And PUEBLO and ANUBIS add some color in the shorter fill as well.