Quick question for the dozen or so people who actually read these posts: Would you be interested if I live-solved a metapuzzle (or a couple of them) on Twitch? A few people with whom I was hanging in the virtual Lollapuzzoola hallway made the suggestion. There are folks who live-solve standard crosswords and cryptics, but I don’t know of anyone currently solving metas. We’d have to figure something out so as not to spoil the contest — maybe I’d take a break from blogging for a week or two (yesssss!) and then live-solve a few at a time, post-deadline. If you’re interested in experiencing my devastating wit and intellect in real time via the internet, say so in the comments.

Speaking of encountering me in real time, I am co-teaching with Jesse Lansner a class about Making Crossword Puzzles this Thursday, August 20, at 7pm EDT. Sign up via the link. It’s free.

Oh, the puzzle! That’s why you’re here. The answer is a liqueur. Yum!

There were no standout themers (and by that I mean long entries likely to hold information relevant to the meta) and the grid was divided into four quadrants. So it seemed likely that we were looking for letter patterns rather than referential meaning. After solving, I generally print out the grid to see if I notice anything — and there it was: a repeated string of letters: EMBL or UMBL. Looking around a bit, I saw that part of those strings formed the bottom of the same set of letters, repeated four times in the grid, once in each quadrant, like so: 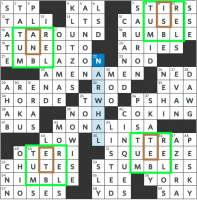 Those letters spell out (and make the shape of a) TUMBLER, which is something you might put some liqueur in, depending on which drink you mix. (And hence the title, since You Need Glasses to hold your liqueur, and a TUMBLER is a sort of glass.) If you take the letters inside each TUMBLER, in grid order of their originating entries, you get AN IS ET TE, or ANISETTE, which is a liqueur and our answer.

Also the letters ANISETTE are encrypted in ALANIS MORISSETTE. The concert where I had 10th-row tickets to see her (and Liz Phair, and Garbage) was postponed to September 2021. Those tickets were expensive — I’m broke but I’m happy I bought them.