Today’s NYT from Grant Thackray is a tribute to one of my favorite YA books.  Let’s take a look at the grid: 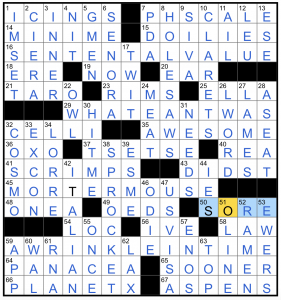 I couldn’t quite figure out what was supposed to be going on with the theme clues, but some dusty corner of my brain remembered that MORTIMER MOUSE was Mickey’s rival, so I started putting rebus squares in the grid.  That didn’t really do anything with the crossings.  It took until I had completely filled things in, sans the IME in MORTIMER, that I spotted it. 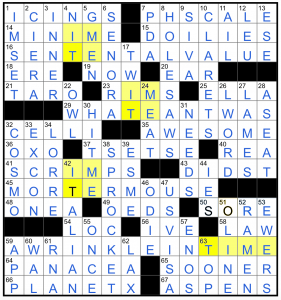 TIME is “wrinkled” in the grid for each of the theme answers with T and E in the correct row, but I and M snaking above it in the previous answer.  It’s a clever play on the book’s title, as well as in how the “tesseract” that plays a part in its plot works, joining the two sections together.  We’ve got SENTIMENTAL VALUE, WHAT I MEANT WAS, and MORTIMER MOUSE wrinkled in the grid.

As mentioned, A Wrinkle in Time is one of my favorite YA books – I’m fond of the first trilogy of books with those characters, though a re-read a few years ago in advance of the movie coming out reminded me that the first one is the best one.  And honestly?  I wasn’t the target audience for it, but I liked what Ava DuVernay did to adapt the book for the screen. 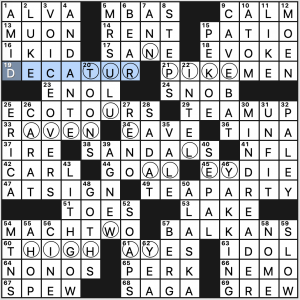 The theme is self-explanatory given the title. The circled letters contain a TURNPIKE, an AVENUE, an ALLEY, and a HIGHWAY each with a “bump” in them.

Once I cottoned on to what was going on, the theme did its job and helped me out, especially in that NE corner where I was getting bogged down. This isn’t the type of theme where you get to enjoy some clever wordplay, but realizing what’s going on helps you succeed in completing the grid.

And you still can enjoy all the other fun fill, and this puzzle has that in spades, such as VOICEOVERS, MIND READER, ECO-TOURS, TEAM-UP, TEA PARTY, John LITHGOW, YAKKING, BALKANS, MACH TWO, and MR. SULU.

I didn’t know ANDANTE [Adagio-allegretto go-between] off the bat, but I think it must’ve been in my brain somewhere. And CAVE BAT seems redundant, but I should know that not all bats live in caves. When we lived in San Antonio, I remember seeing thousands of bats hanging out in highway underpasses. And at this time of year a family of bats roosts in the eaves of our house in Tacoma.

The theme didn’t excite me much, but it’s plenty solid and does the job.  However the fill and cluing had me enjoying this grid from start to finish. 3.8 stars. 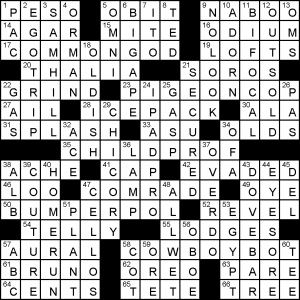 Today’s word alteration theme is left to speak for itself. It’s pretty straight forward though; each of five two-part answers second part has an “OO” that is changed to “O” and the clues are reimagined appropriately. So: COMMONGO(O)D, PIGEONCO(O)P (was kind of cringing where it was going when “pig” emerged), CHILDPRO(O)F, BUMPERPO(O)L, COWBOYBO(O)T. I know what BUMPERPOOL is, though I’ve never actually seen a table IRL. I still feel like this is a fairly obscure answer to base wordplay around, though.

Quite a lot of interesting longer entries today: SAMHILL, NLOOK, DOVEBAR, COUTURE, CHICORY. Even IPADPRO, though it’s surely overpriced and unnecessary, has a certain flavour. 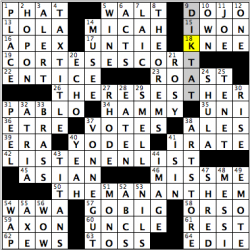 Good day, everyone! Hope all is well with you heading into the weekend!

No real trouble spots when solving the grid, though it took be a bit to catch on to the extra layer of the theme with the repeating pairs of letters. The grid certainly had a human anatomy nature to it, from KNEE (18A: [Femoral groove spot]) to HAMMY (34A: [Leg muscle, colloquially]) to ATRIA, as long as you looked at that one in a different sense from the clue in today’s puzzle (32D: [Spots for fountains, maybe]). We have four eight-letter down entries that stood out as well, all of them being pretty lively. Seeing WAWA made me think of the few people who attest to the convenient store of the same name being such a great place to eat and have a stopover if on a road trip and needing to take a rest stop (54A: [Funk guitarist’s pedal]). The Jaguars referenced in the clue to TITANS was referencing the Jacksonville Jaguars NFL team, with one of their rivals in the AFC South being the Tennessee Titans (43D: [Jaguars’ rivals]). Speaking of football…

“Sports will make you smarter” moment of the day: SHULA (24D: [NFL coach with the most regular season wins]) – A posthumous tribute to coaching legend Don Shula, who passed away at the age of 90 on May 4. In his 33 seasons as a head coach, Shula won 347 career NFL games (328 in the regular season), with 17 of those coming during the 1972 season, when his Miami Dolphins went 17-0 and completed the only perfect season in NFL history. He also will be most remembered for one big loss, as he was head coach of the Baltimore Colts when the heavily-favored Colts lost to the New York Jets in Super Bowl III. Shula was inducted into the Pro Football Hall of Fame in 1997.