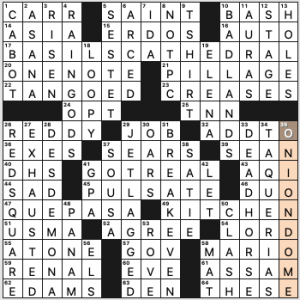 So it’s basically a themed Friday puzzle, with 38 theme squares plus grid art. SAINT / BASIL’S CATHEDRAL in Moscow is in RED SQUARE, and it has nine ONION DOMEs. The (singular) clue for ONION DOME is 35d. [Prominent feature of 5-/17-Across depicted in this puzzle’s grid], and yeah, I guess I can see that, with a QUE PASA/KITCHEN gap.

3.25 stars from me. I expect a themeless puzzle on Fridays! Yes, this is a 72-worder, but the fill is so constrained by the grid art and the inclusion of 38 thematic white squares.

Sometimes these Friday puzzles go by so quickly that by the time I’m done, I have very little to say about them because I barely noticed the entries or the clues while solving! This is one of those days. I totally enjoyed solving this puzzle, but nothing jumped out at me as particularly exciting OR particularly bad, so I’ll keep this brief! 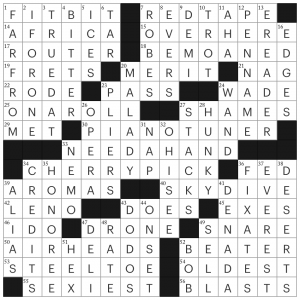 Of the long[er] entries, I liked that middle sort-of staircase of PIANO TUNER / NEED A HAND? / CHERRYPICK best. I also liked I FOR ONE / FIXATES / OVER HERE / AIRHEADS, and I was glad to see this last clued as the candy and not an insult to someone’s intelligence (although DODOS were not quite so lucky). OVER HERE is a fun subversion of the forever-entry PSST, which I appreciate a lot.

Anyways, that’s about it. Overall, lots of stars from me for some cute wordplay and an incredibly clean grid. I just made homemade bagels for the first time, so I’m going to go see how they turned out! 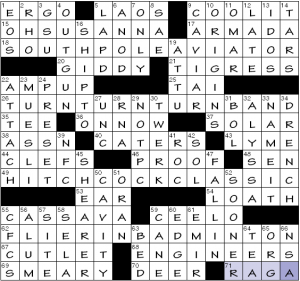 This 16×15 grid features grid-spanning themers featuring minimal clues, all of a feather.

The theme is a WINTRY MIX (59a, [Perilous forecast for travelers, and a hint to the starred answers’ scrambled letters]). The other themers have various forms of wintry precipitation scrambled within. 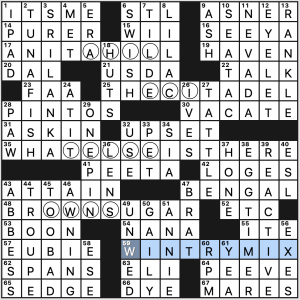 I feel like WINTRY MIX isn’t a very common in-the-language phrase. It only googles at 677k. However, it does have an OED entry, so what do I know.

Would you rather have a WINTRY MIX theme in the dead of winter or the heat of summer? As I write this, I’m visiting my parents in the Bay Area with wildfires burning up the hills behind us, smoke clouding the sky, and an evacuation area less than 2 miles away. A WINTRY MIX sounds like the preferred alternative right about now.

Fill-wise, the most interesting features are the stacks of 8 in the NW and SE corners with only REACTIVE being on the more blah side. The others, TUNA FISH, SRI LANKA, and EGG TIMER, are assets to the grid.

There isn’t anything that I would call thrilling in this grid, but it’s solid and well-executed. 3.3 stars.