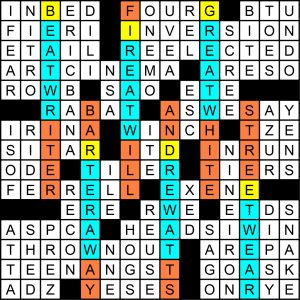 Title: “Just Beyond the Surface”
Prompt: The meta is a hit song from the ’70s.
Answer: “Bridge Over Troubled Water” by Simon & Garfunkel

As with last month’s meta, an abundance of long entries (a dozen at 9+ letters) makes it unclear exactly what is theme and what is not. This is a sneaky and novel way of making a meta tougher and I’m enjoying the mini-trend. That half of them are acrosses and half downs doesn’t help the solver much.

Sometimes you see it and sometimes you don’t, and I happened to see this one quickly, though with just 184 right answers with 30 minutes to go it’s clear that the idea is pretty well-concealed. I began by free-scanning the grid, and noticed that four of the long downs contain the bigram AT (BEAT WRITER, FIRE AT WILL, ANDRE WATTS, GREAT WHITE). Was about one second from writing that off as coincidence until I noticed that three of those four are in fact concealing EAT. Didn’t seem to lead anywhere either, though, and after a few seconds I was about to move on when I noticed a W nearby in each, and then the whole pattern emerged: in each of the six long downs, we have a string containing the letters in WATER in some order.

What 1970s hit could that indicate? A few more seconds’ though put Simon & Garfunkel’s “Bridge Over Troubled Water” in my mind, since in cryptic clue fashion you might say those anagram letters are “troubled.” And then I saw the elegant finale: the letter over those five letters in each entry spells, in order, BRIDGE.

I thought this was a lovely and elegant meta. Difficult to see — if I’d missed it on the first go-round, I probably would never have found it — but so simple in retrospect, and the undulating placement of theme entries does indeed resemble troubled waters buffeting a bridge from below. And the reason you don’t often see the many-long-non-theme-entries gambit to mask what is and isn’t theme is that it’s very difficult to pull off, so bravo to Pete for the second month in a row for making it work so effectively.