Team Fiend’s own Gareth has today’s crossword! It’s perfectly pitched for Monday. I moved through it quickly and didn’t suss the theme until I got to the revealer. It’s a fun, smooth solve. Nice work, Gareth! 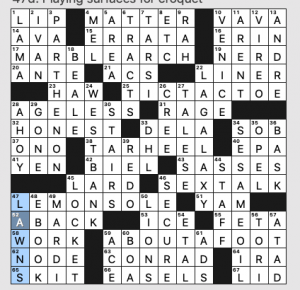 What I didn’t know before I did this puzzle: never heard of the black-capped VIREO. Also was not familiar with the MARBLE ARCH of Hyde Park. This is what I thought of.

Well baby, I’ve been here before
I’ve seen this room and I’ve walked this floor
I used to live alone before I knew ya
And I’ve seen your flag on the marble arch
And love is not a victory march
It’s a cold and it’s a broken Hallelujah – Leonard Cohen

Wow I loved this. I *very* confidently threw in BERENSTAIN BEARS and was *very* confident I had spelled it wrong. I’ve definitely encountered articles discussing the mass-misremembering of the name of this family (aka the Mandela Effect), apparently enough of them that the correct spelling has finally lodged itself in my brain! 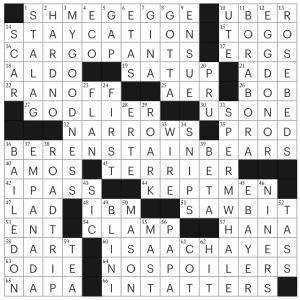 The long entries in this puzzle are all so good! I had no idea bout SHMEGEGGE and it was the last thing to fall in this grid, but now I will be saying it for the rest of the day. The other long entries were also super juicy and packed with excellent clues. I particularly liked [It’s going nowhere?] for  STAYCATION, [Ones with deep pockets] for CARGO PANTS, and [“Don’t tell me!”] for  NO SPOILERS. Other good long entries include ISAAC HAYES / IN TATTERS / MY GOODNESS / SPERM WHALE / BAILED ON / EMPANADA / ROAD TRIP / BORA BORA / EGG DONOR / ROSE BEDS.

Overall, tons of stars from me for this fresh and entertaining solve. Happy Labor Day, team! 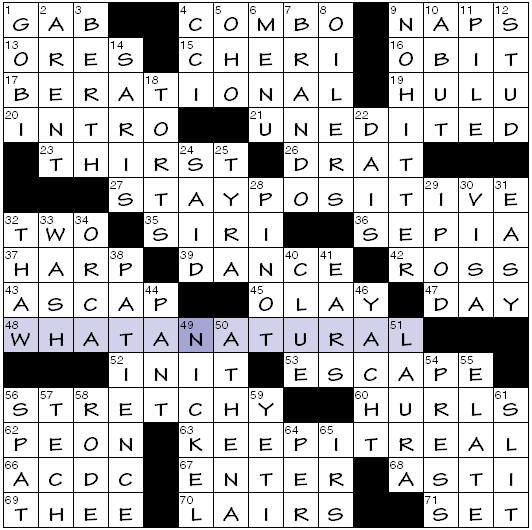 As the clues are all quotes, these number puns are also “lines”.

So let’s do a little analysis now. Per Wikipedia’s List of types of numbers, natural, rational, and real numbers are in the category of main types, while positive numbers are a type of signed number. The definitions below are adapted from there as well: 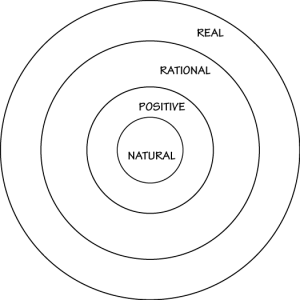 (Circles are not to scale, as all of these sets are infinite. Many thanks to N Elkies and D Sullivan for vetting and correcting my diagram.)

All right, on to non-theme material: