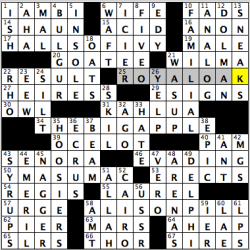 Hello everyone! Hope all is well with you and, if you’re in the Golden State, hope you all are staying as safe as possible with the wildfires and extreme heat causing such chaos.

In a possible tribute to Bell Biv DeVoe, today’s crossword includes five them entries in which the second word is also a word that can come after the word “poison.”

Probably the only entry in which I would have needed the crossings was the final theme entry (Alison Pill), but knowing the theme before getting to that clue made guessing her last name much easier. You could make the argument there’s a little bit of commonly-used slang, with FIVE-O (8D: [“Hawaii ___” (CBS police drama)]) usually being a colloquialism for the police, SNEAKS (13D: [Soft shoes]) for sneakers and WASUP for a hello, though you’d probably see that with two s’s (21D: [Didn’t sleep late]). Did not get to see the Kentucky Derby this weekend and catch the LAUREL put around the winning horse, Authentic (55D: [Winner’s wreath]). Probably my favorite clue was for the entry HEIRESS (27A: [Trust-worthy woman?]). To boot, sending a big thank you towards the sky to REGIS, one of the all-time greats in television in the 20th century who left us last month (54A: [Legendary talk-show host Philbin]).

“Sports will make you smarter” moment of the day: HOOSIERS (35D: [Gene Hackman sports film set in Indiana]) – Capturing how much the game of basketball means in so many communities in a basketball-crazy state, the 1986 film Hoosiers is based on the 1954 Milan High School (IN) basketball team that won the state championship game on a game-winning shot that took place inside Hinkle Fieldhouse on the campus of Butler University in Indianapolis. The movie’s climax was shot in the same building, and the character named Jimmy Chitwood (played by Maris Valainis) makes the buzzer-beating field goal in the 1952 state championship game. In the actual championship game, which was played in 1954, it was Bobby Plump who made the game-winning shot, which was virtually from the same spot on the court as depicted in the movie.

If you were with me last week, you may remember we were road-tripping from Tacoma to Denver to see our son off for his third year at college. Well, the return trip began today, and it saw a 60º temperature drop from the 90s in Denver to the 30s in northern Wyoming. Crazy!

Anyway, our theme today involves X-RAY VISION, which I sure could’ve used while driving through snow flurries on I-90.  Synonyms for “see” are found in the circled squares broken up by a block. The revealer at 63a, clued [Superpower represented by this puzzle’s circled squares] is our hint that we should find a word meaning “see” going through a block. Cute. 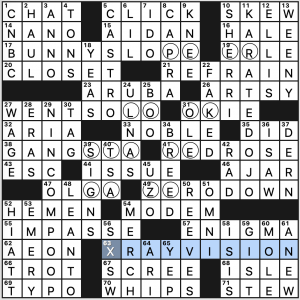 A theme like this doesn’t involve much wordplay, but for the most part the entries involved with the theme are interesting and well-chosen. And the X-RAY VISION conceit is a nice touch.

I’m not sure I’ve ever heard KARATE DOJO as a phrase, but I guess there are more kinds of dojos than those dedicated to karate. Of course, NINCOMPOOP is loads of fun, and ENIGMA makes me think of codebreaking as well as the 90s musical group.

Cluing was pretty straightforward, making for a relatively speedy solve. 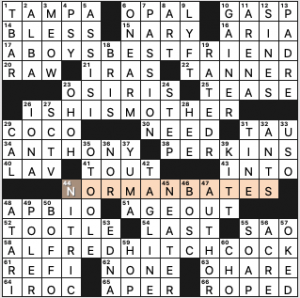 When doing an easy, early-week puzzle, it’s not hard to fly past some clues that aren’t necessary to finish the crossword. So I missed the little cute extra here: The theme topic is the movie Psycho, which is split in the grid with double Korean action: 4d. [“Gangnam Style” performer], PSY + CHO, 60d. [Comic Margaret].  (Side note: PSY feels a little dated as fill now, since he hasn’t had any mainstream U.S. hits in 6 years (and no new records since 2017), but Korean pop music (K-pop) is big among the teenybopper crowd and the boy band BTS’s song “Dynamite” is #1 now. Just so you are in the know, I have included the video below! Wowwwww, I am so not the target audience.

But I digress. The rest of the theme has the quote “A BOY’S BEST FRIEND / IS HIS MOTHER,” as spoken by ANTHONY / PERKINS as NORMAN BATES in the ALFRED HITCHCOCK classic. The movie was released, says the Hitchcock clue, 60 years ago today. (Raise your hand if that makes you feel old.)

Fave fill: TAGLINE and AGE OUT are all that jumped out. Having 70 theme squares doesn’t leave much space for focus on the non-theme fill. The three add-ER nouns are all not great: POLER, TANNER, APER? Meh. (GAINER and NEATER are fine.)

On the representation front, the only women in the puzzle are Eartha KITT, EDNA Ferber, Margaret CHO, and the painted Duchess of ALBA. A rather guy-filled crossword, with the theme being so heavily male too. 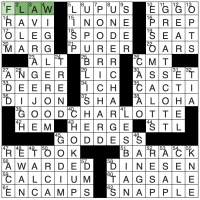 The flavortext says “How did we do?”, and the grades are in the puzzle!

This grid is in such an odd shape I feel like I maybe missed one! The fact that they all intersect is not lost on me at all! That is likely one of the many reasons this was chosen as one of the favorites by Matt in his catalogue. They used to (and still might!) grade this way instead of the letter scale. I like this one better; it feels less competitive. This was still a nice memory job all the way back to 2008. Seems like an eternity ago! 4.4 stars. 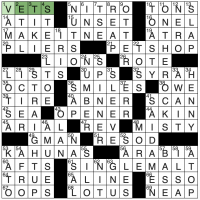 This is another byline that is unfamiliar to me, but his name is in the constructor database already, so there must be some other puzzles by this creator. We have an alcohol-related theme today, so that is a plus … !

Fun times! This makes me want a cocktail, and as I write this it is nowhere near noon! I am still working on my first cup of coffee!! (Wait: they have coffee flavored liqueur ….. !) Nice puns working in this theme. Nice and simple, yet amusing and fun. A solid 4.2 stars from me.

THEME: Common phrases clued as if they’re actors/actresses who were credited in relation to those in the clues. 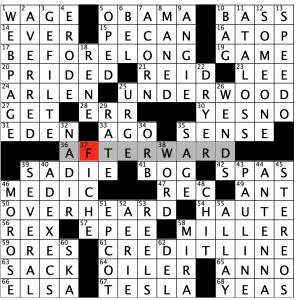 This is a really fantastic idea. I just wish I knew more of the names in the answers (not the clues… those I knew… ok, not Momoa). Then I would’ve appreciated it more and perhaps caught on before the revealer. But I really googled the names AFTERWARD to make sure I had the theme correct.

Again, this is so very clever, but I really wish I didn’t have to use Google as much as I did post-solve!

I’ll take it on the chin, though. I probably should know more than I do.