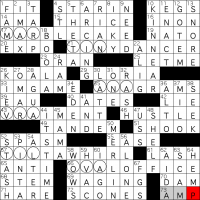 hello and welcome to episode #640 of matt gaffney’s weekly crossword contest, “She Takes the Opening Set”. i solved this week 1 puzzle without the instructions, as i usually do for week 1s. what are the theme answers? the six longest answers get *ed clues:

what are we to do with these? it took me an extremely long time to see what was going on, even though i strongly suspect from the title it would have something to do with women’s tennis. that part is fitting, since the u.s. open is currently going on—along with every other major sporting event, it seems! chris fowler, who is espn’s lead play-by-play commentator for tennis, noted that he’s never before covered a u.s. open that was competing with not only baseball and the imminent start of the nfl season (which is usual), but also the nba and nhl playoffs, the tour de france, the start of the european soccer season, and even the kentucky derby. there’s a lot of catching up to do after a largely sportsless few months this spring.

anyway, i don’t know why it took me so long to see it, given the “opening set” hint from the title, but if you just read off the first three letters of each of those theme answers in order, they spell out MARTINA NAVRATILOVA, an all-time tennis great. the VRA at the start of VRAIMENT was really a strong hint, as that’s a letter combination that usually does not occur at the start of words in english (VROOM and its inflections are the only VR words i can think of).

let’s check the instructions, just to make sure: This week’s contest answer is a many-times winner of the U.S. Open tennis tournament. that’s certainly true—martina won the women’s singles title four times, the women’s doubles title nine times, and the mixed doubles three times, the most recent of which came in 2006, just prior to her 50th (!!) birthday. there’s really no other serious contender for greatest doubles player ever, and she’s also on the very short list of plausible names for greatest singles player.

i have to say, this is one of my favorite week 1 metas ever. how cool is this, that you can hide the name of somebody so famous, using a mechanism that feels so obvious that it must have been done before, and yet… i can’t remember seeing this done before. it’s clearly easy enough to be a week 1, based on the 600+ names on the leaderboard, but it also feels fresh and timely and there was an element of real surprise in VRAIMENT. i don’t normally feel really strongly about week 1s, but this puzzle really gets a wow from me. five stars, for sure.

what’d you all think of this one?