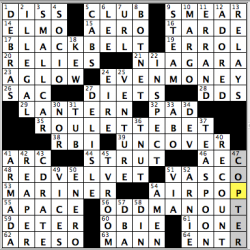 Good day, everyone! Hope all is well with you today and, once again, for those out in the West Coast, I hope you all are staying as safe as possible amid the wildfires.

Today’s puzzle brings us to the casino, though I never have played the game that is mentioned in the reveal, which is ROULETTE BET (35A: [Puzzle theme suggested by the starts of four horizontal answers]). In the grid, the four other theme entries start with some feature of a roulette wheel, either a color or the type of number. What? No green for zero?!?! (Kidding!)

Initially wanted to put in “compact car” for SMALL CAR (3D: [It might fit in a tight parking space]) to start. and not getting DISS. right off the bat slowed me in the Northeast enough that I had to jump around a bit (1A: [Ph.D. treatise: Abbr:]). Love the clue for NIAGARA, and that reminded me that I’ve been there exactly one time and wouldn’t mind making another journey toward the border for another sight of it (21A: [Falls for newlyweds?]). I can’t tell you the last time I came across hearing about the DELISLE scale, but I can tell you that it’s been a pretty good while (27D: [Temperature scale named for a French astronomer]). Having VICES crossing “red velvet” was pretty clever, as I now have the taste for some red velvet cake (49D: [Bad habits]).

“Sports will make you smarter” moment of the day: MANN (63A: [“Death in Venice” author]) – With the start of the football season, and also with the name change of one of the flagship teams of the National Football League, it’s probably a perfect time to mention a great who played with the Washington Football Team, defensive end Charles Mann — not to be confused with the author of the same name, of course!  This Mann’s scientific specialty was sacking the quarterback, with 82 sacks in 11 seasons with the burgundy and gold between 1983 and 1993. He made the Pro Bowl four times and won three Super Bowls, two with Washington (XXII, XXVI) and one with the San Francisco 49ers (XXIX) in his final season in the league in 1994. Kind of baffles me that he is not in the Pro Football Hall of Fame yet, though other Washington greats of that era (e.g. John Riggins, Darrell Green, Art Monk, Russ Grimm, head coach Joe Gibbs) are enshrined. Probably was/is overshadowed by some of the all the great defensive ends/rush linebackers — Reggie White, Bruce Smith, Chris Doleman, Lawrence Taylor, Charles Haley, Richard Dent — playing during that same time period.

Here’s a fun one if you don’t take it too seriously—and the title is a gentle nudge that we should approach this with some levity. Each theme phrase has a hidden asshat (I don’t get to use that word enough, so I’m going to take advantage of the situation) hidden inside, as identified by the circled letters. The revealer, starting at 62a and clued [With 63- and 64-Across, privileged info, and a hint to the circled letters] is THE / INSIDE / DOPE. 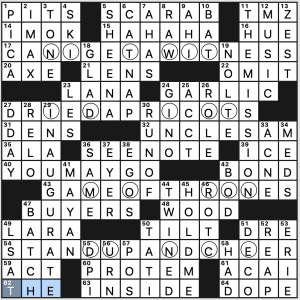 There’s really a lot of great fill in this grid. Okay, INAUGURATE isn’t that exciting, but elsewhere there’s UNCLE SAM, “YOU MAY GO,” SEE NOTE, “HOLD ME” (K.T. Oslin’s song, listen to it here), GARLIC, CATNAP, and SHEENA Easton clued with respect to her “Morning Train” song (listen to it here).

There’s already a number of worthy musical selections in the grid that I could have embedded here, but I’m partial to the lovely soundtrack of THE MISSION [1986 Robert De Niro/Jeremy Irons film]. If you’ve got 10 minutes, enjoy the video of composer Ennio Morricone conducting the Munich Radio Orchestra, or just turn it on in the background. You won’t regret it. 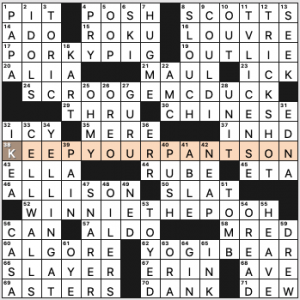 I am sleepy, so quick takes. Cute theme tied together by 38a. [“Be patient!” … or advice seemingly ignored by 17-, 24-, 52- and 62-Across], “KEEP YOUR PANTS ON!” Four perennially pantsless toons make up the meat of the theme: PORKY PIG, SCROOGE MCDUCK, WINNIE THE POOH, and YOGI BEAR.

19a. [Extend beyond], OUTLIE: It feels like the basic form of this word is seen less commonly than the adjectival outlying or noun outlier. Have you ever said that something outlies something else? And you weren’t talking about astonishingly dishonest world leaders? Also of note: This entry crosses OUT, which is nicely clued ([No longer in the closet]) but a glaring dupe.

TRICK SHOT lends sparkle, and CELL WALLS always takes me right to my description of the nutritive value of iceberg lettuce: it’s essentially water and cell walls, ain’t it?

Three stars from me, owing to the non-Tuesday fill in the grid.

Strange that I added PEAS to the puzzle before I read the title in 49A [Porridge ingredients, perhaps]. I think I had that song that we used to play on the recorder in fourth grade in mind.

THEME: PP is added to common phrases to create wacky ones. 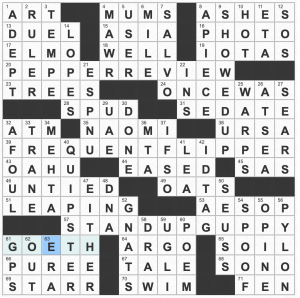 I like these theme types, and I think they’re perfect for the Universal. I also appreciate three solid theme entries rather than shoe-horning in extras.

I think the word “flier” looks very strange. I would only spell it “flyer,” which to me looks much more satisfying.

QUIPSTER was fun to uncover. It’s not a word I think I’ve ever used, but I like the way it sounds! And I finally got MEHTA after seeing Zubin’s name enough times in crosswords. It did feel heavy on the crosswordese, which surprised me. Usually fewer theme answers = stronger fill. GOETH, FEN, MEHTA, SAS, AFOUL, TRANE (?), SALVO (?), SONO, MAWR. The two with question marks were new to me. 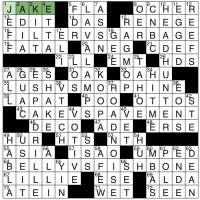 The funny thing in this puzzle is the clues. I am sure this has a basis in some battle of the bands TV show that I know nothing about, but imagine these band battles:

Well, I laughed. But I am tired and everything is funny! Seriously, is there something I am missing here? Was there a band battle show that existed 10 years ago? This puzzle is from 2010, which seems soooooo long ago at this point. Let me know in the comments. In the meantime, you can see in this one Matt’s penchant for hilarious clueing even all those years ago. 4.3 stars.

That is all! Another classic Jonesin’ coming next week. 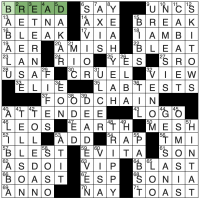 We have a word ladder in this Tuesday’s LAT puzzle. The revealer at 37A explains it all:

The word ladder goes BREAD–BREAK–BLEAK–BLEAT–BLEST–BLAST–BOAST–TOAST. Nice and clean, and with a double meaning since bread literally changes into toast once you put it in some sort of toaster. I like it! And I am tired this week, so something a little simpler is OK by me! 4.2. stars for Bruce’s puzzle this week.