This week, we need to find a four-letter verb that [Matt] hope[s] this puzzle doesn’t make you want to do. 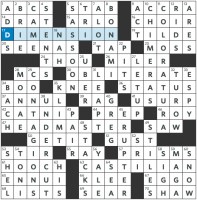 No standout themers, so something else must be going on. Aha! A bunch of clues don’t match their entries regarding number:

First step: Pluralize those entries in order to match their clues, and you get:

Next step: Realize that these are homophones of five other words (all of which, nicely, use a Z):

Next step: Discover five additional entries in the grid that are synonyms of those homophones:

Put those in grid order, and they spell DOUGH. Is that the answer?

N’oh! DOUGH is a five-letter noun. There’s another step: Apply the same pluralization:

DOUGH ==> DOUGHS ==> DOZE, which is a four-letter verb that [Matt] hope[s] this puzzle doesn’t make you want to do, and our answer.