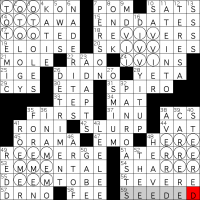 hello and welcome to episode #641 of matt gaffney’s weekly crossword contest, “No-Win Situations”. for this week 2 puzzle, the instructions tell us that we are looking for an eight-letter word. what are the theme answers?

well, there really aren’t any. the grid contains no long answers, and none of the clues are indicated as theme answers. however, i noticed more or less right away that there was a strange cluster of V’s in the upper right, including three crossing entries that each contain a very rare double-V:

the next thing i saw was that those V’s were contained in a 3×3 box of only V’s and I’s. combined with the title, that made me think of tic-tac-toe, but i have to admit that my mind might have been on tic-tac-toe already because i solved this puzzle during a binge-solving session of last week’s crosswords, and i had just solved a puzzle (last monday’s NYT by gareth bain) that contained the entry TIC-TAC-TOE clued as {Kids’ game that usually ends in a draw}. so my brain was already in the right space: this is a tic-tac-toe game, but instead of X vs O, it’s I and V.

with that observation in hand, i was able to quickly find three other tic-tac-toe grids in the puzzle. actually, slightly more than three! there’s one in the upper left with T’s and O’s, one in the lower left with E’s and M’s, and a little bit more than one in the lower right with E’s and R’s. it’s actually a 4×3 box of just those letters. i legitimately don’t know if matt did this on purpose to make us think about it harder, or if it just happened this way and he either didn’t care or wasn’t able to rework it.

in any event, the question of which three rows of that 4×3 box to look at as the relevant tic-tac-toe board can be resolved by the title, which tells us that these are all no-win situations, i.e. they are drawn games. (as a kid, i learned that such games of tic-tac-toe are called “cat’s games”. did anybody else call them that? and why is this term used only for tic-tac-toe?) if you include the fourth row, there is a win for E along the diagonal from lower left to upper right, so that must not be part of the board.

so, we have our four tic-tac-toe boards. what now? we are looking for an 8-letter word, so it must be right to look at the 8 letters used in the four grids: TO for the first one, then IV, EM, and RE. i could not figure out any logical way to put these together into anything that looked like an 8-letter word (i was fairly convinced it would not be just a random anagram), so i put it aside for a day and waited for inspiration to strike.

when i came back to the puzzle, inspiration did, in fact, strike: you can tell which letter went first in each game because there will be 5 of that letter, and only 4 of the other letter. so the four games can be summarized as:

… with player one listed first in each case. reading down in this order gives OVERTIME, which is a very relevant 8-letter word, since it’s what results (in some games) if there is no winner when the clock hits 0.

this is a curious meta. on the one hand, you could certainly solve this by just noticing those 8 letters and anagramming them into an apt answer. on the other, the parts of the mechanism that i found the cleverest and most satisfying were disambiguating the ERE rows in the lower right using the title, and determining the ordering mechanism by order of play in the four games. those were very elegant ways of representing the rules of tic-tac-toe in the context of this crossword grid. the only issue is that you didn’t really need to apply either of them to arrive at the contest answer! however, i’m certainly glad that i did, because it was a much more satisfying solve this way.

on the subject of satisfying solves, i have to confess here that i didn’t much like the crossword part of this puzzle. there was a whole lot of clunky fill in the grid to accommodate those wacky letter pile-ups. i’m not going to sit here and point out every entry i didn’t like, but almost every category of entry i didn’t like was represented, sometimes more than once: random roman numeral, unusual partial phrase, arbitrary trigram clued as a fraternity, plural of an unusual first name, not-really-a-suffix suffix, etc. so that wasn’t a lot of fun. probably the least elegant part was where CYS crossed O’TOOLES at the S. just … ouch.