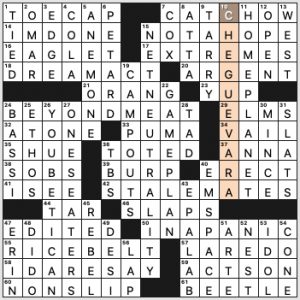 Isn’t it vexatious when you make a careless typo and then it takes awhile to find it? Adjacent-key typo gave me NEETLE crossing EPALAN in lieu of BEETLE and EPA LAB. Oops!

Fave fill: BEYOND MEAT (though I can’t summon up much interest in eating fake meats—I like my vegetarian food to be its honest self), NET NEUTRALITY, GAME PLAN, and CHE GUEVARA.

I wasn’t feeling the vibe for NOT A HOPE, NONSLIP, “YOU BET I CAN,” ONE-SEATERS, EPA LAB, and EM SPACE.

3.25 stars from me. Enjoy your Friday! (Thank goodness for the crossword schedule to give me some idea of what day of the week it is.)

Gooood morning, it is Friday! Short bullet-pointed writeup today because of an 8am faculty meeting. Truly inhumane. 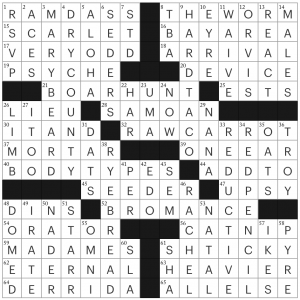 Overall, plenty of stars from me, with minor deductions for a few tricky spots/less than ideal fill. Happy weekend! 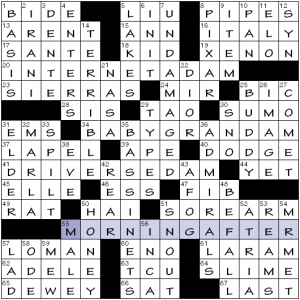 Perfect revealer, which is pretty obviously (as is so often the case) the inspiration for the theme.

This is almost the same theme as yesterday’s WSJ puzzle. This one however has generic words for guys hidden in well-known phrases (but without the added constraint of the outer letters spelling a different word). 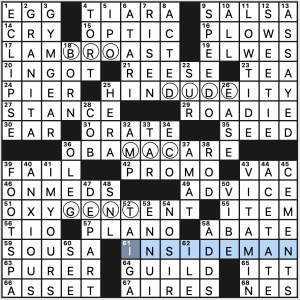 This works. Nothing too flashy, but the theme answers are all interesting and well-chosen.

I will note this here though I failed to note it yesterday where it was more apt, but it’s a nice touch that the “guy” words are all in the exact centers of their phrases.

The nine-letter central theme answer means our corners have stacks of sevens, and there isn’t any particularly long sparkly fill to admire. The sevens are mostly good though with ECLIPSE, GYM GEAR, LOW TIDE, SWEETIE, ANXIOUS, “I’M YOURS,” and VITAMIN. I like GRANITA, too, though I tried to stretch GELATO to get in there.

Is a FOOT SPA [Place for a pedicure] an actual place? I can’t imagine any actual location dedicating their business to just fancy foot work (tee hee). Googling the phrase only shows me small home appliances in which you stick your feet.

Solid theme, but not a whole lot of sparkle besides. 3.4 stars.