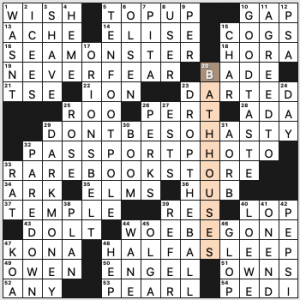 It’s a lousy evening with the loss of Ruth Bader Ginsburg, isn’t it? May she rest in power and peace.

I do always like a puzzle by Robyn. Highlights here: SEA MONSTER, “NEVER FEAR,” “DON’T BE SO HASTY,” PASSPORT PHOTO, WOEBEGONE, HALF ASLEEP (I can relate), PARE DOWN, TEN-FOOT POLE, DROP THE BALL, and GOOD TASTE. Fave clue: 17d. [Three-star picture?], ORION’S BELT.

Not so keen on A OR B and  ESTS, but aside from that, the fill was smooth and chock full of sparkle. 4.25 stars from me.

P.S. Check your smoke detector—a FB friend’s house burned down yesterday, and they got out safely thanks to a working smoke detector. 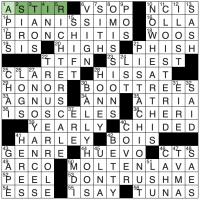 This is the hardest LAT Saturday puzzle I have done in months. But coming from Stella, the undisputed queen of super-tough puzzles, this does not surprise me. I am not trying to be pretentious or anything, so apologies if that is how this comes across, but I can usually solve a Saturday LAT in 5-7 minutes routinely. For one to take nearly 10 minutes means I was struggling. I did have the grid filled entirely only to waste a half minute or so trying to find the typo I had, but even though a challenge, what a fun puzzle! If you haven’t sampled Stella’s website, please check it out, but be warned: her puzzles are HARD. A solid 4.7 stars for a gem of a puzzle.

That is all! It was 35 degrees this morning in northern Indiana. Winter is coming! 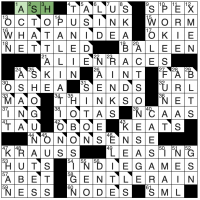 Once again, I have been thoroughly Stumped. Look at all of those error marks! There were tons of answers in here that, upon first, second, or even third looks, I had no idea what the answer was. There are a couple of entries that I STILL don’t understand after the grid is entirely filled in! I will discuss a few of those in the comments below, but suffice it to say this was more than I can handle. I am going to take a nap at some point today. 4.7 stars for a stellar Stumper challenge.

Ouch! Off to get ready for that nap. Have a safe and healthy weekend! 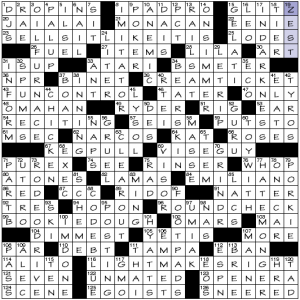 A not-uncommon sort of theme—alteration of the initial letter—but still done well. In this iteration, the letter is changed to its immediate alphabetical predecessor. Moving down (e.g., from ninth to eighth), as it were.

The affected letters don’t spell anything. Easy to tell right away, as there is nary a vowel among the 16. I appreciated the succinctness of the cluing.

No joke, I was just teaching my puppy the command “Drop It” right before I started solving this puzzle. He’s almost got it down.

THEME: IT is dropped from common phrases to create wacky ones 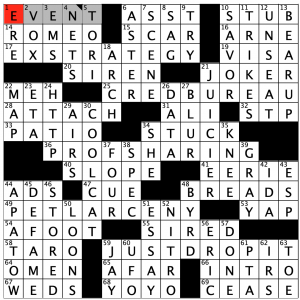 I hopped around this puzzle, and actually uncovered the revealer first before any of the other themers. I’m glad I did, because it made the solve quite enjoyable as I don’t think I would’ve figured out the theme without that. I like all of the resulting phrases. I have a minor gripe with the clue for PROF SHARING since it doesn’t really indicate the shortening of PROFESSOR. And I think I know PETIT LARCENY as PETTY LARCENY, though now that I think about it, the former feels familiar.

I wish the fill were a tad livelier, but overallI liked this one.