This is a very cool debut. The Wave Learning Festival in their own words “has a commitment to lessen the educational inequities caused by the COVID-19 pandemic, as well as the long-standing gaps in educational opportunity.” Daniel Larsen applied to offer a crossword constructing class to middle- and high-schoolers. He explains over at Wordplay that the puzzle he constructed with the first class was rejected by the Times. He offered the class a second time and this is the result. Sounds like a terrific program and a great experience for the kids!

It’s a rhyming theme, which gives us a good Monday-level experience. 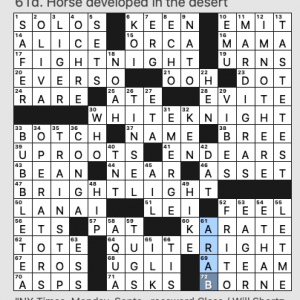 What I didn’t know before I did this puzzle: see above re: the UFC FIGHT NIGHT. 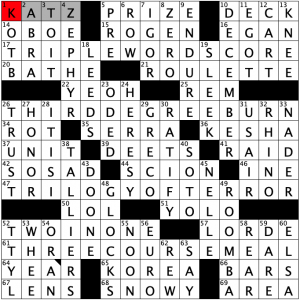 Good things come in threes in this puzzle, except when they come in fours. Every theme entry has something to do with threes:

We’ve got slightly inconsistent execution, which is not my favorite: All of the “three” theme words are at the beginning of the phrase, but TRIPLE, THIRD, and THREE are adjectives and TRILOGY is a noun. I also don’t love THIRD-DEGREE BURN (I’d have tried to pick a theme set that allowed a THIRD phrase with more pleasant connotations, like THIRD-BASE COACH) or TRILOGY OF TERROR, which seems like a pretty deep trivia cut for a Monday. I would have also given extra credit for a revealer instead of a fourth theme entry — not that this theme truly needs a revealer, but why not have three theme phrases if your theme is all about threes? Then there could be a fourth entry like COME IN THREES or something like that.

Let’s move on to the good stuff: I was mightily pleased by the number of women mentioned in this grid. My favorite is the divine Michelle YEOH at 22A (fun fact: that insane emerald ring from Crazy Rich Asians actually belongs to her, and she did not wait for someone else to give it to her). But there’s also the choice to clue EGAN (16A) as the author Jennifer rather than a dude with that name; pop music is represented with KESHA (36A) and LORDE (57A); talk TV with Hoda KOTB (1D); Joan of Arc in the clue for 24D; fictional women Lorna DOONE (43D) and NELLE from Ally McBeal (45D). Plus Karen Black in the clue for the theme entry at 47A.

In sum: Theme could use some work, but the woman-friendly fill makes up for it in my book. 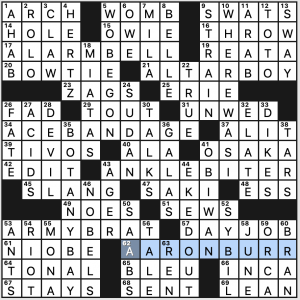 Great theme for your new crossword-solving friends, yeah? It features clean and interesting (or even fun) entries accessible to just about anybody.

Plus, there’s plenty of colorful fill, starting with “WHERE WAS I?”, BOTANY BAY (clued as the British penal colony, but we all know it as Khan’s marooned ship from Star Trek II, right?), and Lake WOBEGON (though I never knew it was spelled like that).

On the other hand SAKI [Pen name of short story writer H.H. Munro] and REATA [Ranch in Edna Ferber’s “Giant”] are probably on the tougher side for a Monday. And probably NIOBE [Weepy woman of myth] as well. But the crossings are fair enough. 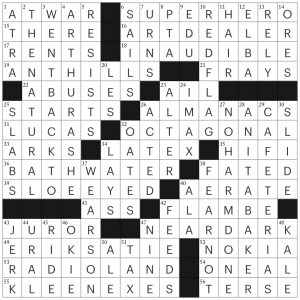 This was a weird solve for me because I knew it was supposed to be a challenging puzzle, and it was full of excellent ? clues, but it felt like I figured out the trick right away with almost all of them, so I came in right around/just under my average moderately challenging puzzle time. Some of the best ? clues included:

The long entries are also mostly pretty fun: NO HARM DONE, KLEENEXES, OCTAGONAL are all great, and I appreciated seeing ANITA BAKER and a (fully-named!) ARTHUR ASHE as well (not to mention a fully-named ERIK SATIE! Patrick Berry is really leaning in to teaching us about the people whose names are sometimes reduced to their possession of convenient letters). I’m personally not so sure about RADIOLAND. which is probably a thing, but old-timey slang is beyond my wheelhouse. I bought and studied several ALMANACS when I was studying for Jeopardy, and now I don’t know what to do with them. If you’re in the market for a paper record of 2018 or 2019, let me know, I guess? 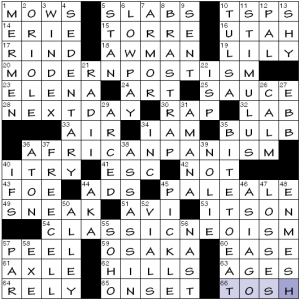 Lexeme-level spoonerisms. These are all movements—two predominantly artistic and one primarily political—ending in -ism. Internal parts of these movements have themselves been moved around.

Just three themers, though of 13 letters, which gives the grid room to breathe. And they were mildly entertaining. Can’t ask for much more in a Monday theme.