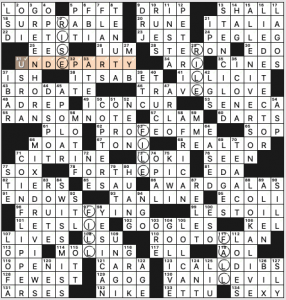 The * on my solving time is because I’d had my first margarita in probably 7 or 8 months and I could barely stay awake through the puzzle. I think it was me and not the puzzle! And the delay in posting is because when I was finally awake enough to blog, I couldn’t get the site to load, no idea why.

So quickly, before WordPress locks me out again: The “Word Ladders” theme is that the circled answers make a word ladder that progresses from RISE (through RILE FILE FILL) to FALL, and those words serve as “ladders” that the Across entries climb up and down. 18a is SURP[RISE]PARTY, zigzagging down, and 31a is UND[ESIR]ABLE, zigzagging up. 28a STERILE GLOVE, 46a TRAVEL IRON. 62a PROFILE PIC, 78a the terrific FOR THE LIFE OF ME. 96a FRUIT FILLING, 114a MOLLIFYING. 110a ROOT OF ALL EVIL, 130a VANILLA FLAN (are there non-vanilla flans?). Neat. Plenty of juicy long fill, like LOOK ALIVE, ALLEN IVERSON, MIXED REVIEWS, I CALL DIBS, and RANSOM NOTE. I don’t love LETS LIE across from LIE DETECTOR. Overall vibe, four stars.

I really enjoyed this puzzle! It’s a wordplay theme I haven’t seen before (or haven’t seen recently enough for it to matter) and it was fun to solve.

Each theme answer has “ly” added (as the title tells us). Wackiness results. 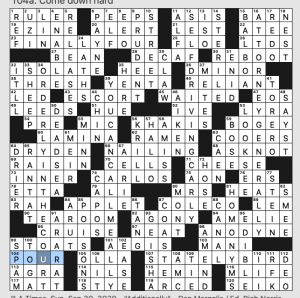 All the base phrases are solidly in the language. The theme helped with the solve but it wasn’t obvious; there was some work to do to figure out each theme answer. The “aha!” moment was very satisfying. I also really like the arrangement of theme entries. They sort of pinwheel around the grid. Aside from the clue for 16d (and maybe I’m just being dense this morning) it was a really good theme set. Thanks, Dan and Rich!

What I didn’t know before I did this puzzle: that LYRA is the protagonist of “His Dark Materials” (never read it). Also did not know that the MGM Resorts reward program is M LIFE.

This is what I was listening to as I wrote this.

This puzzle’s gone to the birds. Each theme answer is a phrase that includes a type of bird which also has an E somewhere in it. That E starts an EGG in the Down direction in each of the theme answers, though the EGG is disguised (a la a cuckoo bird?) inside another fill entry. 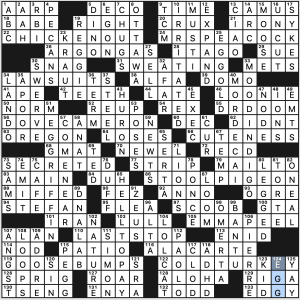 Wow! This is complicated. It seems simple, but in my mind it looks like it was a bear to construct. The main theme answers themselves are symmetrical, but the EGG words are not, and having those crossings of varying length seem like they add an extra level of complexity for the constructor. I am suitably impressed. There are a lot of proper names involved with the theme, including some I didn’t know, but I expect our constructor had limited choices in putting this thing together. Kudos on a job well done!

And yet there’s still enough long sparkly answers to satisfy that itch. I especially liked the MORDECAI / MOOD INDIGO stack, A LA CARTE, HELL TO PAY, LAST STOP, DR DOOM, and most especially EMMA PEEL, aka Dame Diana Rigg who just past away. There’s a lone LOONIE at 46a who apparently didn’t get the memo about the theme and laid some EMTS, but we’ll give it a pass.

A puzzle after a bartender’s heart… assuming that bartender has the worst taste in the world.

THEME: Two different drinks are “blended” together and result in (extremely) wacky phrases. 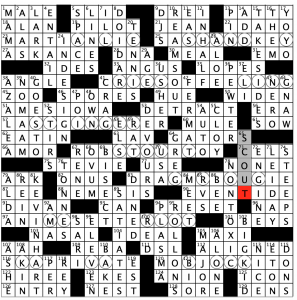 Look… if you’re gonna go for wacky answers, go big or go home. These are over-the-top Birnholzian in their wackiness, and I love it. To be honest, for all but one of the answers, I figured it out by the drinks themselves before even reading the second half of the clue, then I went back and parsed the answer. SKA PRIVATE was the one I figured out by reading the second half of the clue since I’m unfamiliar with KAVA.

I’m not entirely sure I’m parsing DRAG MR. BOUGIE correctly since I don’t really equate the words DRAG and “Roast,” and MR. BOUGIE seems really out there, but that’s the only one that doesn’t land solidly for me. The others I enjoyed thoroughly, but ROB’S TOUR TOY takes the win.

I solved very steadily north to south, which is not typical for me, so it means I hit very few stumbling blocks. My favorite clue today was 63A [Bathroom in Tel Aviv?] LAV. LAV being hidden in TeL AViv, of course. Nothing much else really stuck out to me in the fill, but that’s probably because I was so looking forward to the next theme answer every time. I was disappointed only when I got to the end and there were no more.

P.S. Evan also issued a challenge to me, and I’m going to issue it to everyone else as well. Here it is:

Make any one of the cocktails in the theme answers and report back to me how it tastes.

I’ll have that challenge completed by next Sunday and I’ll post the result here.

I am not looking forward to that.

THEME: Two-word phrases where both words an precede “Card.” 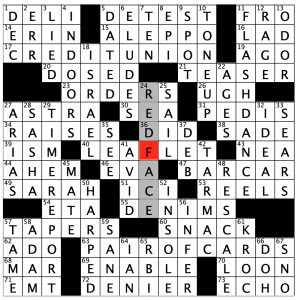 What really sold this puzzle for me was the fill. Particularly the clue for 49A [Author/comedian Cooper] SARAH. She only recently garnered national attention since her viral TikToks lip-syncing #45’s oft-confusing rhetoric became mainstream. You can find her on YouTube if you are unfamiliar with her. Very, very entertaining… and somewhat scary.

As far as the theme goes… it gets a “meh” from me. I didn’t see it until after I had uncovered the revealer, which doesn’t really strike me as a stand-alone phrase that could serve as a basis for a theme: PAIR OF CARDS. Also, I’m unfamiliar with the term DANCE CARD. I was going to say I was unfamiliar with FLASH CARD as well, but then… duh. Of course I remember FLASHCARDS from elementary school!

2.9 stars from me today. Enjoy Sunday!