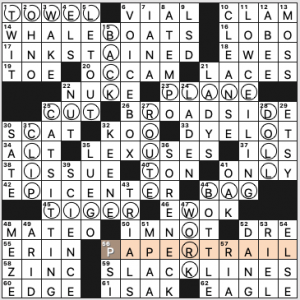 Solved this one off the clock since I’d had one of those wildly frazzled evenings. Regular coping skills frayed 7+ months into pandemic times, yeah? I know I’m not alone in that!

Each of the shaded/circled answers needs to be preceded by the word paper to make sense with its clue. Working through the PAPER TRAIL (56a. [Series of documents that trace a path, as suggested by this puzzle]) from 1a and snaking down to that revealer, we’ve got paper TOWEL, paperBACK, paper CUT, paperCLIP, paper TIGER, paper ROUTE, paper PLANE, paper DOLL, paper BAG, and paperWORK. Kind of a neat theme angle. I confess that I’d kind of like the short themers to be spelled in the direction of that PAPER TRAIL, which would mean CUT, BAG, and ROUTE would need to be entered backwards. (I enjoy writing/typing backwards, in small amounts.)

Squeeze! squeeze! squeeze! all the morning long; I squeezed that sperm till I myself almost melted into it; I squeezed that sperm till a strange sort of insanity came over me; and I found myself unwittingly squeezing my co-laborers’ hands in it, mistaking their hands for the gentle globules. Such an abounding, affectionate, friendly, loving feeling did this avocation beget; that at last I was continually squeezing their hands, and looking up into their eyes sentimentally; as much as to say,- Oh! my dear fellow beings, why should we longer cherish any social acerbities, or know the slightest ill-humor or envy! Come; let us squeeze hands all round; nay, let us all squeeze ourselves into each other; let us squeeze ourselves universally into the very milk and sperm of kindness.

Theme: C’s are added to the starts of certain two-word phrases. 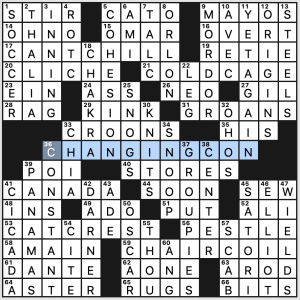 I can’t say these were the most exciting crossword entries, but you’d be hard pressed to find many two-word phrases which you could put C’s in front of and still have them make some sort of sense. Given that, I like these well enough.

In the fill, I’m partial to YET AGAIN, GROUPIES, CHAKRA, CICADA, and MORDOR. I did not know THALIA [Comedy Muse], and I had to dig deep to remember SATORI [Contemplation goal, perhaps]. Wikipedia tells me it’s a Japanese Buddhist term for “awakening, comprehension, understanding.”

Funny that COHESION is in this grid. My daughter did a science experiment during her online class earlier today in which she had to see how many drops of water would fit on a penny before the water spilled over. Thanks to COHESION and surface tension, she managed to get 50 drops on there.

I wasn’t so keen on all the weird plurals: MAYOS, OHOS, and HIS [Casual greetings]. I don’t see any reason in the grid why this last one couldn’t have been clued as the possessive pronoun. Unless I missed it.

When creating a grid, I find that C’s are often problematic to work with. So on the whole, I’d have to say this grid is quite good considering all the C’s involved, including all the ones that aren’t part of the theme. 3.6 stars.

Edited to add: Commenter lurkerlou brought to our attention that all the clues also start with C. It’s a testament to the smoothness of the clues that I didn’t notice, or else it’s a testament to my inability to notice things. Either way, it’s a nice touch.

This is a very good puzzle!!!! The long stuff is *excellent*, the grid design is cool, the cluing is fun, and representation is superb. Aside from one or two pieces of fill I could live without, which were entirely worth the tradeoff, this was a very smooth, enjoyable, moderately challenging New Yorker puzz. 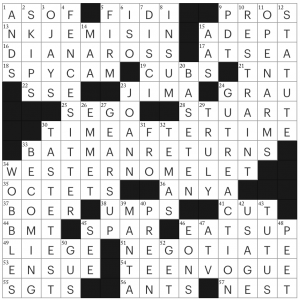 The long entries included *takes a deep breath*: TIME AFTER TIME / BATMAN RETURNS / WESTERN OMELET / NK JEMISIN / DIANA ROSS / NEGOTIATE / TEEN VOGUE / FENCE SITTER / GUT REACTION / TASTE TEST / RESTRAINT/ BECOMING / OPEN ARMS. There isn’t a one of these that I would look sideways at– these are all high-quality entries! The central staircase is great, and I loooved the clue on BATMAN RETURNS, which is such a delightful misdirect (I was trying to remember if, at some point in “Nightmare Before Christmas,” there was an army of penguins…). Also loved seeing N.K. JEMISIN, one of my favorite authors right now whose book “The City We Became” was the best thing I read this summer. I could keep going about the rest of these excellent long entrees (BECOMING! DIANA ROSS!), but in the interest of time, let’s just leave it at “I love them all.”

Overall, tons of stars from me– this was a fun solve and a strong start to the day. See you all on Friday! 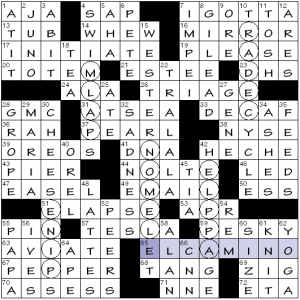 Just what you’d expect from the title. The circles make it that much more evident.

Three fruits, two conifers. And they alternate, for what it’s worth. Additionally, the reversed and hidden trees span the two words of each theme answer. Good distribution, good consistency.

Good puzzle, but not particularly exciting. 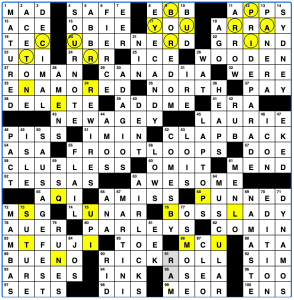 This week’s AVCX is another collab from Ella Dershowitz and Aimee Lucido, with a supersized 18×19 grid and a 2.5/5 difficulty rating.  My solver didn’t pick up all the circled squares, so I’ve highlighted them in the screenshot at right.  Let’s take a look at what’s going on.

We’ve got a number of different rings in the grid, spelling out things like BURY, PAIR, CURRENT, QUINTS, and PLUMB.  Those all sound like fruits, homophonically — BERRY, PAIR, CURRANT, QUINCE, and PLUM.  All of that ties in nicely with the revealer at 55A:

I’m not in love with the way the black squares at the top and bottom of the grid make for a lot of 3- and 4-letter fill that’s just okay, but I can see how constrained the grid likely needs to be for this concept to work.

In case you haven’t seen a FROOT LOOPS ad recently, here’s what they look like now! 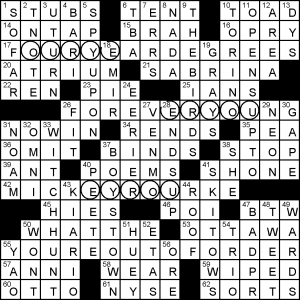 The theme type is common and quite clearly outlined: >YOURE<OUTOFORDER, so the letters YOURE are scrambled across two parts of three theme answers. A strong point of the puzzle is the choice of interesting theme answers, which is not the easiest give that five letters are locked in. So: FORYEARDEGREES, FOREVERYOUNG (love his friend and lover Joan Baez’s interpretation…), and MICKEYROURKE.

Other interesting spots include my grandfather’s catchphrase, WHATTHE; the full name of the KIARIO; and long downs THEBIRDS, WITCHHUNT, BOYSTOWN. An advantage of just four theme answers is space to do something other than the puzzle’s theme!

New to me: VENMO. The crosses were fair and it probably got the author out of a tricky locked-in V???O in the grid.

Maybe he will be in the Rock ‘n Roll Hall of Fame someday? (Stubbs has been in since 1990.)