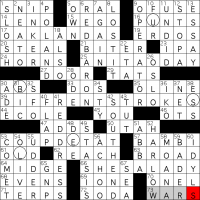 hello and welcome to episode #642 of matt gaffney’s weekly crossword contest, “We’re Surrounded!”. for this week 3 puzzle, the instructions tell us that we are looking for a well-known children’s show. what are the theme answers? five long across answers all include an apostrophe:

okay, well, that’s the easy part. what next? i have no idea. i’ve tried a few things suggested by the title, like reading off the letters on either side of the apostrophe in various orders. nothing doing there: AS / OD / FR / DE / ES. the apostrophes don’t necessarily all represent elided letters; as the clue points out, O’DAY is an invented stage name, so it’s not really short for OF DAY or something. and A’s isn’t a contraction, nor is it a possessive; that apostrophe only exists to distinguish A’s (the plural of the letter A) from As (a two-letter word).

there are a bunch of apostrophes in the clues, of course, as you might expect. nothing out of the ordinary there.

oh, okay, here it is: each of the letter pairs surrounding the apostrophe also form the first and last letters of a three-letter word elsewhere in the grid. in order of theme answer:

reading off the middle letters in this order gives BLUES, which is the first word of BLUE’S CLUES, a children’s show that contains an apostrophe. that was actually going to be my desperation guess anyway, since the word CLUES is related to crosswords and the 5/5 enumeration is possibly suggested by the five theme answers.

i’m mildly curious if matt considered also putting ACS in the grid so as to have not only BLUES but also CLUES. would that have been more elegant or less elegant? i say more, but i could see the argument either way.

this is a very elegant meta, and i think quite constrained. i wonder what part of the idea came first—wanting to make the answer BLUE’S CLUES, or just the idea for the mechanism and picking whatever five-letter answer worked out with the constraints of the grid. the latter seems possible, as the former would require some serious diligence and/or good fortune in picking theme answers. the 15-letter DIFF’RENT STROKES seems like a natural choice for the middle theme answer, but then you’d need your answer word to have a vowel (or D, i suppose) as the middle letter. i guess the fact that an apostrophe is often followed by S, and a huge percentage of __S words are legit crossword entries, opens up the possibilities somewhat.

that’s all from me. what’d you think of this one?