This is a lovely Monday crossword. The theme is amusing and totally gettable and there wasn’t anything in the fill that made me grimace.

The theme answers take us along a continuum of done-ness. 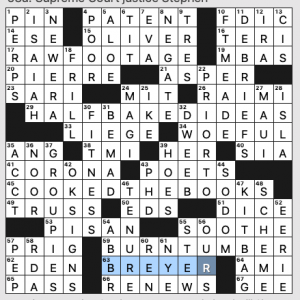 What I didn’t know before I did this puzzle: that ISAIAH is the book after Song of Solomon (or Song of Songs, as we call it). 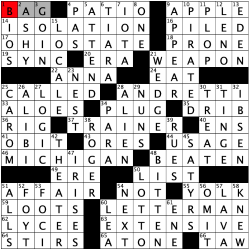 Today’s theme is rivals — three symmetrically placed pairs of them.

I want to like this theme more than I do, because hey, debut constructor! And filling a grid cleanly enough that it works on a Monday, which this totally does, is not as easy as it looks, so good on Tyler Burnett for making it happen. But I didn’t love how much hopping around the grid one has to do to find the theme entries, nor that two of the theme entries were only four letters long — this makes it tough to pick out the theme even after you’ve solved, much less use it for help during solving. (I most certainly spent more time looking the puzzle over to discover the theme after the fact than I spent solving it in the first place.) That doesn’t feel very Mondayish to me, although of course what day of the week to run the puzzle is not the constructor’s choice. One thing that was the constructor’s choice: the theme is very dude-heavy! How about some women rivals?

I’m not sure why the title is presented in all caps. I guess it really wants to get its message across.

We have a synonym theme today where the main entries hide a word meaning “class” (i.e. a variety or category). The revealer at 61a is clued [Average income group, and a hint to hidden words in 18-, 24-, 40- and 52-Across] and is answered with MIDDLE CLASS. 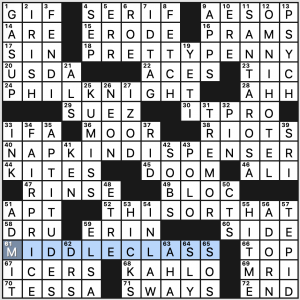 I’m surprised circles weren’t used to identify the hidden words. It is Monday after all.

Another reason this puzzle feels a little misplaced as a Monday: the fill, starting off with KUMISS [Asian drink made from fermented mare’s milk]. I find it interesting to learn about, but new puzzle solvers are going to struggle with this one, especially as it’s crossing a proper name. Add to that FENDI [Rome-based fashion house] and unsightly crosswordese like ETRE and CTS (cents) as well as ICERS and IT PRO, and you’ve got a tougher-than-Monday grid in my book.

Of course, the long fill is strong in a ZB grid, and that’s the case here with FAIR PRICE, APTITUDES, OMNI HOTEL, and SANTA ROSA [California city known for its wineries]. Sadly, this beautiful city is also known for wildfires more recently.

Everything else is solid, though standard. This wasn’t my favorite Burnikel grid, but it might have felt better a couple days later in the week. 3.25 stars.

This puzzle *really* wanted you to know that you were solving a New Yorker crossword. It felt like a syllabus in 20th century intellectual history, which I think was probably the goal! There were a few great entries, and some clues that I enjoyed, and an awfully pretty grid, but I don’t really think I *enjoyed* solving this puzzle, exactly. Still, I can’t HATE ON the puzzle for being what it is– if you’re choosing to solve the challenging New Yorker crossword, you should probably expect to learn a lot in the process! 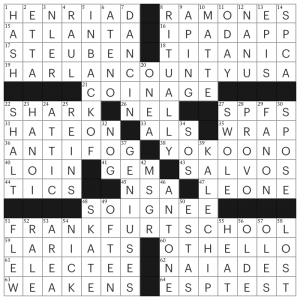 First things first, this grid is gorgeous. I love the diagonal slash and evenly spaced segmentation and the little carets flanking the middle. Super cute, and made for a grid structure that perfectly supports two (15)s. Those 15s though… if HARLAN COUNTY USA is “Renowned,” I guess I’m just an uncultured brute (I am). I don’t really like this kind of editorializing in clues, because it has the effect of making the solver feel stupid for not knowing the entry. If your clue/entry doesn’t stand on its own without “Renowned,” you may want to rethink including it! (See also below re: KALE CHIPS). Anyways, FRANKFURT SCHOOL also felt new to me, although I think I’ve seen it referenced in a Natan Last New Yorker puzzle before? Both of these 15s were new and challenging.

There were also some very difficult crosses in this puzzle that are worth noting. HENRIAD / STEUBEN / DANCIN / NEL in the NW was really challenging. That’s a lot of propers/foreign language words in one section, on top of a county that could have been anything if you didn’t know the “renowned” documentary! Same with SOIGNEE / MSGR — I knew I was trying to get “monsignor” into 4 letters, but had absolutely no idea which 4 letters would make the cut.

Overall, not my favorite New Yorker crossword, but it gave me an excuse to listen to Rihanna this morning, so I can’t stay mad at it. See you Wednesday! 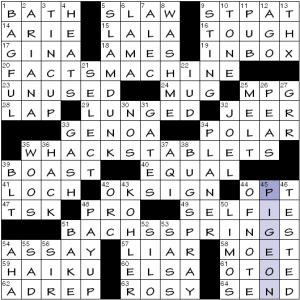 I appreciate how the new spellings are so varied.