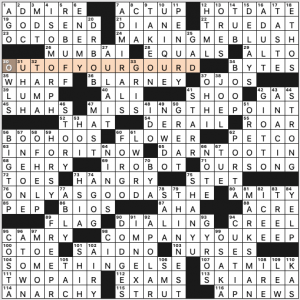 Fun theme! Things you might say to someone that begin with you’re are reimagined more literally:

I like most of the theme, and overall the fill is good and the cluing crisp. Gotta run, it’s dinner time. 4.25 stars from me, a fun Sunday puzzle.

Still have yet to finish the challenge that involves the consumption of any of the drinks featured in this puzzle. Let’s just say I’ll get to it eventually!

THEME: Areas in a house are scrambled in common phrases, and need to be “put back in order.” 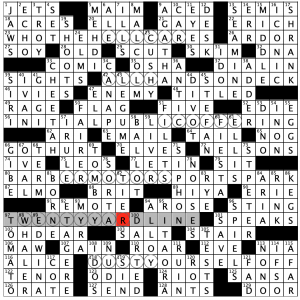 Kinda feels like the game Clue. “It was EDWINA in the STUDY with the SIPHON!”

I can’t say I ever really hit a groove with this one. I was tripped up often, either by the fill or the cluing, and “unscramble-the-word” themes don’t usually help me all that much synergy-wise. I typically see the theme word retroactively, especially when the word keeps changing (that’s not a complaint… I’d much rather have different words to unscramble then its cousin theme-type where a single recurring word is mixed in different phrases). So, like last week, this played rather like a themeless for me.

There are some colorful phrases, though. Particularly in the theme answers. All of them landed solidly for me with the exception of BARBER MOTOR SPORTS PARK, which I’ve never heard of (having TOTED instead of BORNE for 81D [Carried along] certainly didn’t help!).

Here’s just a few stumbling spots for me, starting right off the bat with 1A:

The last area to fall was the Southwest. I found it very difficult, especially since WENTY-YAR doesn’t look like it can be unscrambled to me, especially into the name of an area in a house.

In all, I enjoyed the challenge of this one. It was just a tad out of my wheelhouse in general.

*** I’m really disappointed in myself that I missed the very Birnholzian layer of this puzzle that puts it (many) steps above a typical unscramble-the-hidden-word theme. The first letter of each of the house areas collectively spell CHORES, which of course is extremely apt, as we are to put the house back in order. The hint for that comes in the notepad, which I completely missed. My apologies!

A frequent contributor to the Universal is back again!

THEME: Phrases that include ENT are missing their T, and wackiness results. 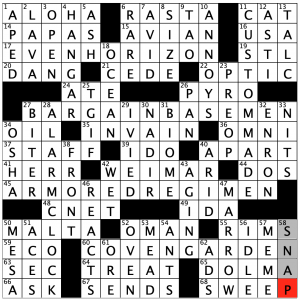 Oof. I face-planted on this when it came to fully understanding the theme, but that’s due to my own ignorance I think. The only base phrase I was solidly familiar with was BARGAIN BASEMENT, and I used that and the (amusingly odd) title in order to figure out the other base phrases. I would’ve preferred if COVEN GARDEN didn’t have two words ending in -EN!

A smooth ride for the most part! Even though I didn’t fully grok the theme until late, I still enjoyed the clues for the longer answers, most notably [What would be evidence for a flat Earth?] EVEN HORIZON.

Coulda done without BITER, especially clued as a dog. And it’s always hard to get excited about NADIR, which I’ve seen maybe once outside of crosswords.

I really liked this theme. I wish the fill was as good.

The theme answers are phrases with one part swapped out for the other member of a familiar pair. It’s easier to show you than to describe. I figured it out from the very first themer and had fun decoding each one. 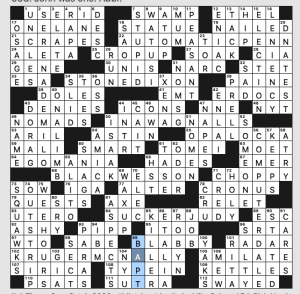 All the base phrases and mixed-up pairs are solid, and the result is funny – a really nice Sunday theme. Not sure which one is my favorite! I’m leaning toward SERENA DE MILO but I also really like SUCKER JUDY. They just tickle me.

And then there was the fill. Let’s start with having CIA in a clue and in the grid. Ugh. Don’t like DOLES clued as [Gives sparingly] – it needs “out.” EMT and ER DOCS and EMER are all in the grid; that’s a little much. INTR for a kind of verb. Maybe if I were Christian, BAPT for [John was one: Abbr.] would seem less awkward. The crosswordese  (ALETA, ARIL) wouldn’t have bothered me so much if it weren’t for all the other dreck.

What I didn’t know before I did this puzzle: that Timbuktu is in MALI (geography is seriously not my strong suit, as anyone who’s played me in Learned League already knows). Also did not know that the term SALTY language came from profane sailors. I didn’t look that up because I want it to be true.

Completely unrelated: Today is October 4th and that got me wondering if CBers celebrate this day (10/4). Sure enough, it’s National CB Radio Day! And consider signing this petition to honor all the truckers who’ve been hauling our goods back and forth during this pandemic and keeping vital supply lines open. Have a great day, good buddies!

On to the puzzle! The title is enough of a hint as to what’s going on here, but there’s also a revealer starting at 115a: [With 118-Across, often-criticized move by a central bank … and a hint to the starred answers’ last words]—that is, CURRENCY / MANIPULATION. The other themers are well-known phrases whose last word is an anagram of a world currency. 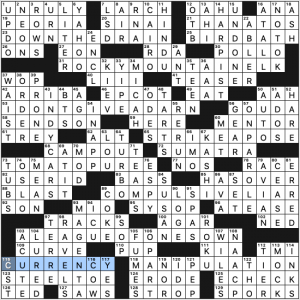 I, for one, am grateful for the parenthetical clarifications, because I would have had a challenging time recognizing all these currencies and where they came from (I’m looking at you Albanian lek). It occurs to me that this theme could’ve been more humorous if the actual currencies had been used in place of the normal words in the phrases (STRIKE A PESO or I DON’T GIVE A RAND, e.g.). But that requires the solver to be up on numerous world currencies, which might be a stretch (judging by my own knowledge gaps), so maybe it’s best as it is.

Moving on to the fill, highlights include THANATOS (Greek god of death), ARRIBA, CAMP OUT, SUMATRA, STEEL-TOE, HARPIST, INDY CARS, ON PAROLE, and MAGENTA. I also liked the modern techy feel with ROKU, USERID, textspeak IMO, Zoom alternative TEAMS, IN-APP purchases, and MOD and SYSOP both clued [Online admin]. Only E-CHECK gets the side-eye from me.