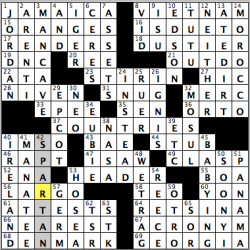 Good day, everybody! Hoping that everyone is doing well and staying safe.

Because of COVID, many people have had to cut out possible plans of traveling across the country and the world. Though a very small consolation compared to that reality, today’s puzzle allows us to, literally, travel around and see some different COUNTRIES (37A: [Puzzle theme suggested by this crossword’s periphery]). Of course, none of the answers are clued in reference to any features and characteristics of the country itself.

The execution of the theme allowed for some longer entry chunkiness in each corner of the grid/ There wasn’t any part of my solve where I ATE DIRT (13D: [Swallowed one’s pride]), as in taking a HEADER (53D: [Web page banner]), but it did take me a little bit before figuring out the clever cluing to EPCOT (29D: [Center of Florida?]). Actually, I did have a little stumble when putting in “Basra” for MOSUL, as I had the the “s” in there  initially and I automatically put the former in once I saw Iraq in its clue (32D: [Iraqi metropolis]). Not sure if it was new or a rerun, but I saw the 60 Minutes feature on2018 Nobel Prize winner Nadia Murad, the Yazidi Iraqi captured by (and eventually escaped from) ISIS who has used her platform to create organizations to help and empower women who have been victims of human trafficking and genocide. What a story, and it always reminds me of the general disinterest our country possesses when it comes to the human suffering of people in the Arab world, particularly those who identify as Muslim.

“Sports will make you smarter” moment of the day: REECE (54D: [Model/volleyball star Gabrielle]) – One of the more popular athletes of the 1990s, Gabrielle Reece starred on the court before her more well-known popularity on the runway and in sports fashion modeling. Reece set school records in solo blocks and total blocks during her career at Florida State University, and played the sport professionally before fully concentrating on her modeling/acting interests. Reece is married to another famous athlete in a non-mainstream sport, surfing legend Laird Hamilton.

We have a letter-replacement theme today, but it’s a two-for-one deal. Specifically, the letters AF replace the letter D, as indicated by the revealer AFFORD (50d, [Handle the expense, and, when parsed correctly, this puzzle’s theme]). The correct parsing should be “AF FOR D” (not AFF OR D which was my first thought). 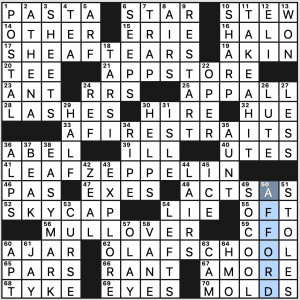 Not bad. Some flow better than others, but on the whole, not bad. I checked to see what other words can swap out an AF for a D, and pickin’s were slim. These are all of the common words that I could find that can do this, so let’s hear it for an exhaustive theme.

In the fill, TAKE A HIT and EASY MARK are both assets, as are SKYCAP, APP STORE, MULL OVER, and “SO COOL!” Nothing much to scowl at except maybe TARSI and OPER.

Clues were pretty straightforward for a Tuesday, hence my solve time is about 30 seconds faster than yesterday. Seems like the two puzzles should have been swapped.

Good puzzle, solid all around. 3.5 stars.

Phrases that start with an R are converted to goofy phrases starting with FR- words: 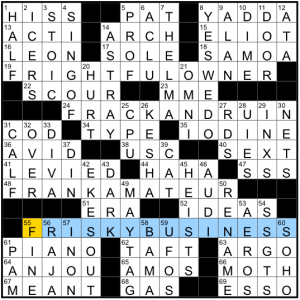 The theme’s well-slotted on a Tuesday and it mostly works, but I had some reservations, as noted.

Wasn’t loving all the fill here. Plural abbrev SSGTS, AEROS from a second-level hockey league, UIES, SSS, ACT I, ESSO, ICERS, and SING OF clued as if it can stand alone. That last one might be more defensible if clued as a 6-letter partial (see the 1973 Carpenters song, with “sing of happy, not sad” in the lyrics). 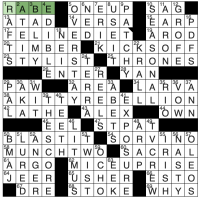 We have a cute quip in this retro Jonesin’ from 2015. It reads: FELINE DIET KICKS OFF A KITTY REBELLION – MUNCH TWO MICE UPRISE. Clever little pun here, with a play on the phrase “much to my surprise” being changed with a few near homophones. I am not sure what phrase is being parodied in the title, though; perhaps it is just a clever rhyming title. If I am missing something, please let me know! And yes, I made a slight error in the solve: I thought the cats had DIED in 17A! They are anything but! Nice puzzle, especially for you cat lovers out there, which includes me! 4.2 stars this week.

I could go on, but I will stop here! I think there are still a few more retro Jonesin’ puzzles over the next few weeks. 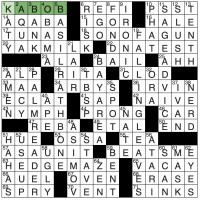 The theme is sometimes hard to see when they all go down. And when you’re solving quickly! Thank goodness there is a revealer!

Nice! They all seem like spices at first, but I have not used palm leaves in any cooking I have done. I am not a great cook, so take any cooking advice from me with a grain of salt! (See what I did there?) Anyway, nice puzzle, Bruce! Looking forward to seeing you again at the ACPT, assuming this COVID-19 nightmare is over by next spring. Somehow, I doubt it. But keep the puzzles coming! 4.4 stars today.

THEME: Design elements of a house’s interior can be found hidden in common phrases. 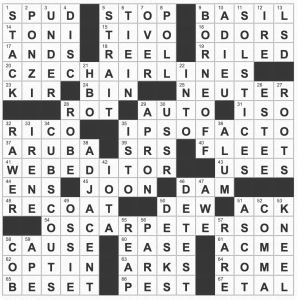 I found this one hard to get excited about, namely because I solved it in the online web applet, which doesn’t allow for circles (unlike the version offered at this site). So I solved it essentially as a themeless. Without circles, the synergy that could exist within the theme is gone for me. For instance, I would’ve picked up right away that I was looking for furniture/house stuff had CHAIR been circled, which would’ve allowed me to fill in BED if I were struggling with WEB EDITOR. Alas, that’s how it is at the moment. Someday it’ll be fixed.

Fun to see Brad Wilber’s name on this one, since I so commonly associate him with the brutally difficult Saturday Stumper.

The rest of the puzzle had a certain old-timey feel with BORNE OFF, ACK! (is that specifically from the Cathy comic strip?), and a CD reference. I never had TIVO, but is that still a popular thing to have? No clue.

CZECH AIRLINES was new for me, but inferable.