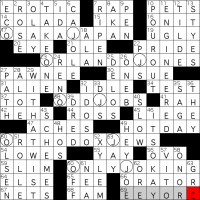 hello and welcome to episode #644 of matt gaffney’s weekly crossword contest, “Think Drink”. for this week 1 puzzle, the instructions were quite unnecessary, as “drink” is right there in the title. what are the theme answers? the five longest across answers are all two-word phrases with initials O.J.:

so what drink is the meta answer? obviously orange juice is the intended answer. i don’t know if anybody tried to get cheeky by submitting something like ovaltine julep. if you did, good luck with that!

this meta is certainly easy enough for a week 1, and the five J’s (plus an X, in a very unusual XJ cluster) in the theme answers lend themselves to an interestingly scrabbly grid.