Title: “Mind the Overlap”
Prompt: The meta for this puzzle is a British pop hit of the 1980’s.
Answer: “More Than This” by Roxy Music 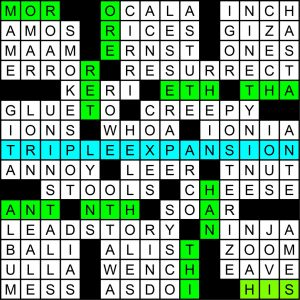 Just 127 right entries with half an hour left, so a pretty tough one, judging by that and the comments at the Muggles Forum.

MOR jumps out right away at 1-A [It has the fifth-largest economy in Africa: Abbr.], which is the abbr. for Morocco. 1-D was MAME so this could’ve easily just been FOR/FAME to avoid the abbr., so MOR is definitely part of whatever’s going on here.

Saving that info for later, we make our way to the puzzle’s only overt theme entry at 39-A: [Like many marine steam engines] = TRIPLE EXPANSION. So there’s our big hint; what to make of it?

Well I already had the number 3 on the brain since noticing that highly suspicious MOR at the start, and here we have a reference to the same number in the central grid-spanner, so let’s take a look at the three-letter entries in the grid and see if they lead anywhere.

Even with all this information and guessing the right idea straightaway, it still took me a while to see what was going on, since this idea is simple but beautifully hidden as well. All you do is take the ten 3-letter entries in the grid (in order of first letter in the grid), and string them together. They look like this:

That’s Roxy Music’s biggest hit, 1982’s “More Than This,” with each three-letter word expanding two of its letters into the next word. Deceptively simple, elegantly hidden, novel, clever, and you’re 100% sure once you see it that it’s correct. What more can you ask of a meta?

Note how Pete mixed these ten three-letter words nicely between Acrosses and Downs so they didn’t jump out nearly as much as they would’ve as all Acrosses. And yet more cleverly deployed squid ink this month with evocative longer entries masquerading as theme: SMOKES POT, POSTERIZE, HELLHOLES, NINETY-NINE, UNINSTALLS, and LESSER APE, all on the downs, and none of it theme. Pure evil. Love it! Not quite as sneaky as in recent months since the single 15 could reasonably and correctly be inferred as the only theme entry, but you never know so the smokescreen was probably still fairly effective.

Also note how difficult it must’ve been to come up with a song title that worked. MOR made me wonder and THI made me wonder even more, but the ten 3-letter entries mostly did their main job which was not being suspicious enough to attract too much attention. I caught it early but if I hadn’t, I might not have caught it at all.