This took me a lot longer than an average NYT. Not sure if that’s me or the puzzle. It’s been a busy weekend and I feel a bit fuzzier than usual. 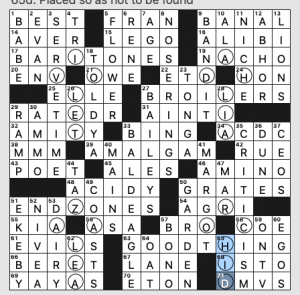 There are four sets of circles, all of which look like the kind of doodles I drew when I was bored in school. There’s a circle of letters around a black square with a stem below: VIOLET, DAHLIA, AZALEA, and ORCHID.

There are two revealer answers: 5d [With 50-Down, place that this puzzle grid represents]: FLOWER GARDEN. It’s a charming theme with so many constraints that the fill suffers a bit. I could have done without ENV, ETD, ACIDY, and AGRI. Is LIA Fáil obscure? I’ve never heard of it.

What I didn’t know before I did this puzzle: that NIVEA was first sold in 1911. 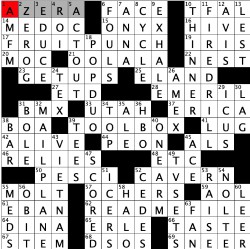 Those of you who pay attention to my times will notice that this puzzle took me 25 seconds longer than last week’s Monday. Which doesn’t seem like very much time, but in fact it’s close to 25% longer than the 1:45 I took last week, and I’m wondering whether non-speed solvers noticed a similar uptick in how difficult this puzzle felt relative to other Mondays.

This felt like more moderate-to-hard fill than one expects on Monday, and most especially in that northwest corner, which is where people often like to get started (certainly I rarely have trouble making my way systematically down from the top on a Monday). But here, in that area, we have the brand name AZERA at 1A, crossing ZERO G (not with the easiest clue, I’d argue) at 2D and EDUCE at 3D. And right below AZERA is MEDOC at 14A, which although clued with a hint (“French red wine with a physician in its spelling”) is, I would argue, too hard for Monday unless surrounded by unequivocally easy fill, which it isn’t.

So, when you work your way through this harder-than-a-normal-Monday puzzle, what theme do you get as your reward? Some handyperson stuff for your TOOLBOX at 39A [“Carpenter’s accessory that might hold the ends of the answers to starred clues”]: The final word in each theme entry is a repair tool.

On the plus side, it’s cool that the tool in each theme entry appears in a completely different sense of the word. On the minus side, the entries feel a bit musty to me, especially a prewar airplane and fruit punch, which seems to have been replaced by trendier stuff like hard seltzer and kombucha. I would’ve loved to see MC HAMMER enter the mix (yeah, yeah, I know, “U Can’t Touch This” also came out 30 years ago).

Gooood morning! Today we have a challenging offering from Kameron Austin Collins that I very much enjoyed! The grid design is cool, the long entries are solid, and the cluing is A+. Let’s take a look: 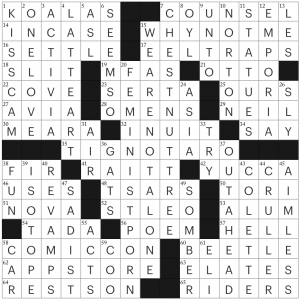 First of all, this grid! It’s cool and different, orienting the staircase vertically and segmenting the corners and center apart from each other, leading to a nice 5-mini-puzzles-in-one feel. The staircase entries are FEMINIST PORN / WE ARE NOT ALONE / CHESTNUT TREE, 2/3 of which are super fun and fresh, and 1/3 of which (CHESTNUT TREE), while not exactly groundbreakingly exciting, holds the other two together and is completely passable on its own. That all three are crossing TIG NOTARO, one of my favorite comedians, makes this section of the grid my absolute favorite. Second up for me is the NW corner, with fabulous clue/entry pairs on KISS CAM [It displays a public display] and SETTLE [Get meh-rried?]. I’ve never heard “meh-rried” before, and when I got the entry I laughed out loud.

Overall, I really enjoyed solving this puzzle! Lots of stars from me. Happy Indigenous Peoples’ Day, everyone. 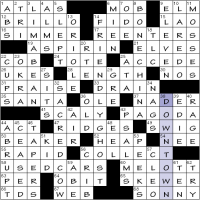 Gentle theme for a Monday, one that we’ve probably seen multiple times before (or it least it feels that way).

Also, so many possibilities for associated musical selections. Something from the Hot Club of Cowtown? A version of “Chinatown, My Chinatown“? One of the many, many great ‘downtown’ songs?? None of those, because as you probably know I tend toward the obscure.

Let’s a have a spin around the rest of the grid.

Each theme answer is a phrase clued [You’ve got a point there] where “point” takes on a different meaning in each case. 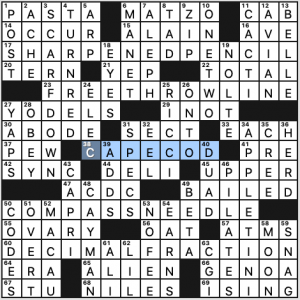 I kept having issues with this theme. First, I had a hard time distinguishing between some of the different “point” meanings, specifically the first, third, and fourth ones since a pencil, a cape, and a needle all come to a point. Second, there isn’t really a point at the FREE THROW LINE; you have to make the basket. Third, I don’t have a point at CAPE COD; one exists there, but it’s not mine as the clue implies. Last, I don’t recall ever hearing the term DECIMAL FRACTION, despite my engineering background. Either something was written “in decimal” or “as a fraction.” Apparently it’s an actual phrase though, so I guess that’s just a gap in my knowledge.

I do like the fill though, especially those long Downs: SCARF DOWN, TURN RED, APPLETINI, and PILATES. I did not know the name of director ALAIN Resnais, but a few crossings made it clear what it should be.

Despite my issues with the theme—and I’ll grant that I’m probably overthinking it—this is a well-made grid. Three stars.