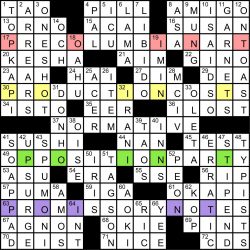 Good day, everyone! Hoping that everyone is doing well and staying safe.

Now that sports is back, the ritual of splurging money on college and professional sports games is back in business. Though I left that life in high school (don’t ask about what I did involving sports betting in high school, believe me), many people continue to be bitten by the gambling bug, and today’s grid includes a point spread. In betting parlance, it’s the number set by oddsmakers in determining how much one team is favored over its opponent, creating the platform for binary wagering. In this puzzle, four 15-letter entries feature the letters P, O, I, N, and T in that order which are spread throughout the entries and denoted by circles (color coding in the grid displayed above).

We have some nice stacks of seven-letter down entries in each corner, and the very first one, TOPKAPI, stands out as the best of the lot for me (1D: [Istanbul’s ___ Palace, and the title of a 1964 film]). Had not heard of the film, however, so will do some research on that after finishing up here. I know UPSURGE is beyond legit, but I have only ever used “surge” when describing an uptick in something (42D: [Sudden increase]). To be honest, I had totally forgotten that the song mentioned in the clue to  GINO was sung by him (22A: [“I Just Wanna Stop” singer Vannelli]]). Always have “Living Inside Myself” in my mind any time I see a reference to him. This grid was one that a foodie could like, from SUSHI (41A: [California rolls and the like]) to ACAI (15A: [Antioxidant berry]) to SPUMONI, which I have never had before (43D: [Colorful Italian dessert]). Alright, time to skeedaddle! But first…

“Sports will make you smarter” moment of the day: IGA (59A: [Tennis phenom ___ Swiatek, 2020 French Open winner]) – Well, that was quick!! Just two days after becoming the first Pole, man or woman, to win a Grand Slam title in tennis, 19-year-old Iga Swiatek makes her debut (I believe) in a major crossword puzzle! Along with winning a Grand Slam before the age of 20 and defeating three top-20 players on her way to winning Roland Garros, the most impressive part of Iga’s championship run is that she did not drop one set in any of her seven matches! Goodness! Now I can dust off my skills at pronouncing Polish names — with help from a Polish photographer whom I met and became friends with at last year’s U.S. Open — given Iga’s rise to stardom. Her last name, given how it appears in Polish (Świątek), should be pronounced as “shvi-AHN-tek.” 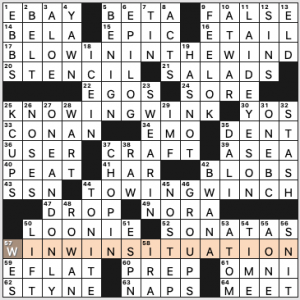 With a couple themers filled in, it wasn’t hard to guess where the revealer was going: 57a. [Circumstance that’s good for everyone … with a hint to 17-, 25- and 44-Across], WIN-WIN SITUATION. The other themers include the letter string WIN twice:

What else? Fave fill: ONE AND ONLY, LAID EYES ON. Five more things:

Each half of the theme answers can follow the word FIRE (55d, [Word that can precede each half of each starred answer]). 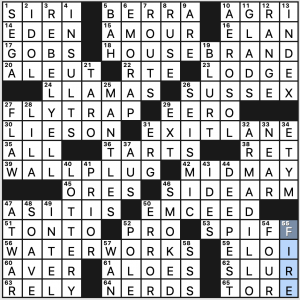 These work for me. WALL PLUG doesn’t feel quite as in-the-language as the others, but it feels close enough (or maybe it’s a more regional phrase). I love that the set ends with WATERWORKS (a great phrase on its own), but fire water and fireworks are loads of fun as well.

My only nit would be that just having the word FIRE as the revealer feels less elegant than having an apt phrase in its place or as the title. Perhaps the torpedo-launching commands “Fire One! Fire Two!” could’ve worked as the title.

Fill-wise, I’m liking ARMADILLO, LOTTERY, SEISMIC, “AS IT IS…,” GOBS, GLADS (clued as the flowers), and the Billy IDOL/REBEL YELL stack in the NW. ELOI, EERO, ETYM, AGRI, and SSS aren’t great on a Tuesday, but the crossings are fair enough.

Today I learned: Billy Idol is still somewhat active with an album released in 2014. Early this year he teamed up with Mayor Bill de Blasio in a campaign called “Billy Never Idles” to get New Yorkers to stop idling their cars in order to reduce pollution. What a rebel!

A puzzle that celebrates the difference between “Let’s eat Grandma!” and “Let’s eat, Grandma!”

THEME: Commas are added to common phrases and clued as if a celebrity is doing well at something. 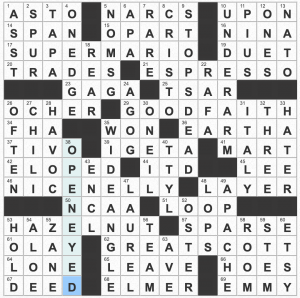 Love this idea- perhaps it’s been done before, but the consistency in having them all be congratulatory phrases is an excellent touch. NICE NELLY is completely new to me (both the phrase and the pop star). It seems to refer to prudish behavior.

I have to say I GET A is an awful bit of fill. I think three-word partials should be nixed from the word list. There has to be a way around that one! In fact, the fill in general in this one didn’t really excite, so it’s good the theme was so much fun!

I did like apt anagram of “hater” being HEART.

Also, I don’t think of pink steak as RARE. If it’s pink, it already sounds overdone! Red is rare. Pink is medium at the very minimum. 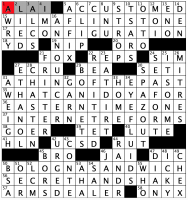 This retro Jonesin’ is from 2012, and I am not going to lie, I struggled with this one. For some reason, if I solve in Across Lite on my Mac, the timer doesn’t start automatically. And that is probably a good thing, since my time on this was probably close to 20 minutes! Lots of great long entries in this 15×16 grid, with extra size needed to accomodate the quad stack in the middle. Long answers like WILMA FLINTSTONE, A THING OF THE PAST, “WHAT CAN I DO YA FOR?”, INTERNET REFORMS (before its time, perhaps?), and SECRET HANDSHAKE make for quite a lively and challenging puzzle. 4.7 stars for this stellar feat of construction. 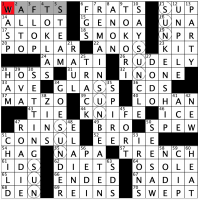 We have down theme answers this Tuesday, and appropriately so:

The revealer isn’t the last Down themer, but it is the furthest to the left and down in the corner, so maybe you ended up there. Not difficult at all, in my opinion, and with slight tweaking could probably be a Monday puzzle. A nice, gentle solve this Tuesday! 4.2 stars.

That is all for now! Everyone have a safe and healthy week!