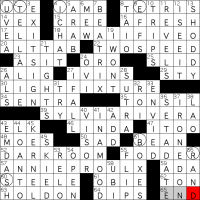 hello and welcome to episode #645 of matt gaffney’s weekly crossword contest, “Historical Figures”. for this week 2 puzzle, guest constructed by mollie cowger, the instructions tell us that we are looking for an eight-letter name. what are the theme answers? the four longest across answers all had *ed clues:

what’s going on here? well, my first thought was the correct one, that all of these seemed to contain a bunch of roman numeral letters. in fact, looking closer, each of these theme answers is two words (treating the hyphenated FIVE-O as a single word), and each word contains a consecutive roman numeral:

the next step is to locate the squares in the grid corresponding to those numbers. read off in the same order above, we can spell out the name of the roman emperor TIBERIUS. that’s an apt answer for a roman numeral meta, and the title is also *chef’s kiss*, as it can refer to tiberius himself and also to the idea of a roman numeral (“figure”) itself.

this meta was great, almost the platonic ideal of a week 2 meta. once you had the aha, you didn’t arrive at the answer right away, but the only remaining steps were clearly indicated. SYLVIA RIVERA, containing LVI and IV, is an especially nice find; i wonder if noticing that was the seed of the meta. i would have found the puzzle about 10% more elegant if a different numeral had been used for the repeated I instead of repeating the IV, but that’s a minor detail.

apparently this is mollie cowger’s debut puzzle, but you wouldn’t know it, because this is a nice grid. at only 74 words, it’s fairly open, even with four long theme answers and seven more letters required to be in certain places in the grid. the clue {Negative space?} for DARKROOM was quite brilliant. i hope we’ll see more from mollie in the future!

This entry was posted in Contests and tagged Mollie Cowger. Bookmark the permalink.