This may be a Monday NYT record for me. I really enjoyed it. It’s a great Monday puzzle.

The theme is comical. Literally. 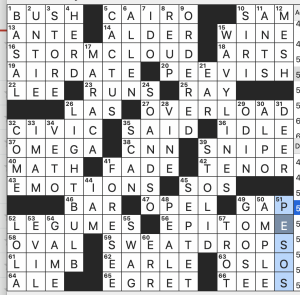 Consistent, accessible, and still fun to solve. I like grids with theme answers going both across and down – no reason, I just like them. I didn’t grimace at anything in the fill.

What I didn’t know before I did this puzzle: that SIRI sometimes says “The carpet needs vacuuming” in response to “Talk dirty to me.” 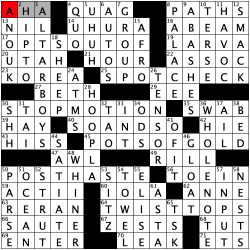 It’s anagram time! This’ll make more sense if we start with the revealer first: 64A, TWIST TOPS [Easy-to-remove caps…or, one way to get the starts of the answers to starred clues?]. Hmm, I’ll have to use that in a cryptic clue someday, because what this entry is telling you to do is anagram, or “twist,” the word TOPS to create five other words that, probably not coincidentally, each appear at the “top” of their respective theme entries. We have:

I know I should be impressed that there are six theme entries (counting the revealer) totaling 56 letters of thematic materials. And I am…but I can’t say I especially enjoyed the solve. The price of so much thematic material is entries that seem out of place on a Monday, like QUAG, ANOUK (I’m all for more women in the puzzle but think she might be saved for a little later in the week), and ABEAM (hell, I’m not particularly interested in seeing those nautical adverbs any day of the week if it can be avoided). I also don’t love the theme entries themselves, especially OPTS OUT OF and POTS OF GOLD; I might have gone with three or four themers plus revealer instead to go after longer phrases, which have more potential to be evocative (how about the ’80s song STOP THE WORLD? Imagine trying to get that out of your head if that were in the puzzle).

So: a theme consistently and thoroughly executed, but could’ve used a bit more of that elusive “sparkle” quality. 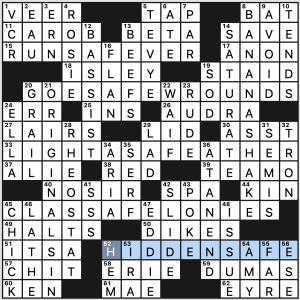 Actually, three of the four entries have dark overtones: sickness, fighting, and crime. The grid-spanner is a much-needed antidote to those heavier entries. But overall, a solid set for a hidden-word theme. I generally prefer it when the hidden word varies from entry to entry, but this makes for good Monday-level fare and should help the newer solver finish the grid.

BANANA SHAKE and ORIGINAL SIN make for strong marquee fill entries, and I like the scientific feel of SATURATE and RHEOSTAT next to them.

I’m surprised to see SAVE at 14a since it’s clearly related to SAFE.

Today we have a challenging puzzle from Elizabeth C. Gorski that I finished in close to my Wednesday New Yorker average… except with an error that it took me up to about my Monday average to identify ?‍♀️. I’m a huge fan of the pinwheel grid design, which gave us a bunch of fun medium-long entries and a highly segmented grid. I definitely struggled with some of the proper nouns in this puzzle, but that’s to be expected on a New Yorker Monday, and for the most part of the crosses were fair (1-2 exceptions noted below). 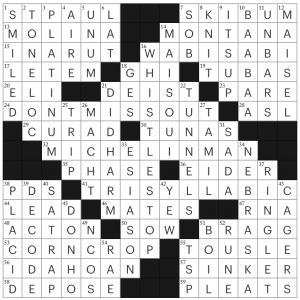 The fun longer stuff includes: DON’T MISS OUT / MICHELIN MAN / TRISYLLABIC / WHISTLE-STOP. I particularly loved the clues on MICHELIN MAN [Tired-looking mascot?] and TRISYLLABIC [Like gangbusters?], both of which are excellent examples of misdirection/word play.

Overall, lots of stars from me for a pretty, solid, delightfully-clued grid. And a nice break from the New Yorker puzzles that derive their challenge rating entirely from arts-and-culture proper nouns! See you on Weds. 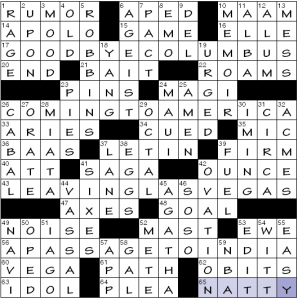 This appears to be a début, so I’m especially regretful that I don’t have the time or energy to give it a full write-up.

What we have are four films with geographical directions in reference to locales as their titles. Not so amazing, but check it out—all of them are 15 letters long. And there’s real variety in the directions. That’s good curation and construction.

The ballast fill is smooth and well-clued, so it’s really a very good crossword.