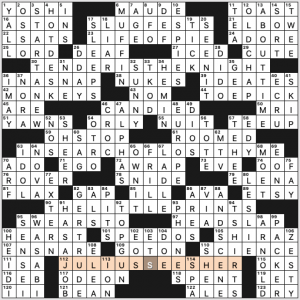 The title is a pun on tidal basin, though there is nothing particularly basin-like to the theme. The six themers are puns based on book titles:

Not much of a common thread—one play, one novella, one kids’ book, and three novels. Five with the last word changed, one that’s a one-word title that changes (and also changes pronunciation). Three are food-based, three are not. Given how many possibilities there are for such a theme, it’d have been good to strive for more uniformity. All novels, say. Or all food-related puns. (War and Peas! Definite pronunciation shift there, though.) All books made into well-known movies (with “adapted screenplay” perhaps useful for the puzzle’s title).

Overall, the fill was rough. I did like SLUGFESTS, HOTDESK ([Share a workspace, in modern lingo]), GERTRUDE Stein, “… AND SCENE!” and the Japanese neighbors SENSEI and WASABI. But it felt like there was more OSSO, ORLY, TEHEE, and the like than I want to see. Given the inclusion of just six themers, smoother fill overall is probably doable with more effort and a willingness to rip out whole sections in search of better entries.

THEME: Initials in common names/phrases are reimagined as an initial for something else and “expanded,” or fully spelled out. 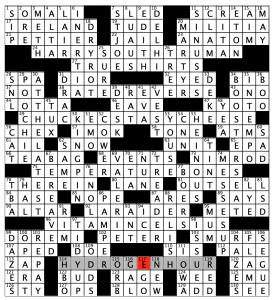 And of course, there’s another Birnholzian layer wherein the initials spell out an appropriate word, in this case: STRETCH.

Odd one to figure out. I caught on with CHUCK E. ?????? CHEESE and finally asked myself What else can E stand for? ECSTASY of course! Also, the result is a very, very strangely themed restaurant.

The biggest distraction for me was reading the clue for 38A. I was distracted because I suddenly remembered there’s a new season of the outstanding TV show Fargo out, and I confess I stopped solving to watch the first episode before falling asleep on the couch. So… yeah… major distraction.

Really struggled in the south with HBO / HYDROGEN area. For 127A [Black trailer?] I had ISH and I was very confident with it (as in the TV show “Blackish”). I also had NITROGEN. Since H–HOUR is not a familiar term to me, any initial would’ve worked. Made my way out eventually after erasing the whole area and trying a couple alternate answers.

Nice to see a new clue for ENOLA!

And an excellent clue for 93A [Mid-Atlantic colonist?] ANT. The word ANT appears in Mid-Atlantic.

I enjoyed the theme except for one thing.

Let’s start with the fun. Each theme answer has a two-word base phrase that ends with the name of a car. There’s an ED added to the first word. Wackiness results. 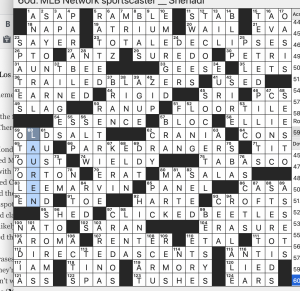 All the base phrases are solid and the ED alterations are amusing. I’m not crazy about the plurals. Since they’re consistent, I realize this is totally a personal thing and not a valid complaint. I don’t why I’m not crazy about it. I’m just not. There are a couple of other awkward plurals (MASALAS, BETSYS). It’s still a fun theme.

What I didn’t know before I did this puzzle: that Isabel Allende wrote a book called AVA Luna. I also have never heard of LAUREN Shehadi, and I had never heard of NATE Dogg, a cousin and collaborator of Snoop.

Well that was different. I didn’t take the time to fully process the the theme until I was all done. The clues for each theme answer were straightforward, so I solved it as a themeless and went back at the end to make sense of it all. I did note that the number of asterisks in the theme answers seemed to be increasing as I progressed down the grid.

Here’s what’s really going on. Theme answers are grouped according to the number of asterisks in the clues. The final words in each answer of the group spell out a country. I won’t list out all the clues for brevity’s sake. 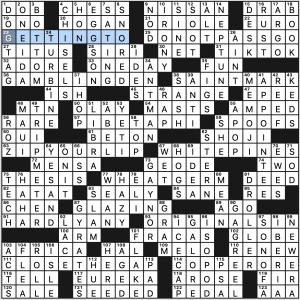 This looks wickedly complicated to devise. First you have to find countries that you can parse into sections where each section is a standalone word in another phrase. Those other phrases (1) not only have to be commonly-enough known but (2) have to be placed in sequential order in the grid. This makes fitting everything symmetrically in the grid extra difficult since the constructor lacks the normal freedom to swap entries with a like number of letters to improve the fill.

So the fact that I didn’t notice any of this during the solve is an indication of how smooth the grid is despite some onerous limitations on grid design. Impressive execution!

My one nit is that I’m not sold on the use of the asterisks to group entries together; it feels pretty ungainly when you get to the bottom and three of the clues have five *s each. But I can’t think of a more succinct way to do it.

Highlights in the fill include NEPTUNE, TIKTOK, ANTMAN, TRIP METER, MEMOJI (crossing SHOJI), GAG REEL, and “SON OF A…”. I balked at DROLLER [More whimsically humorous], but you know what, there’s plenty of other good stuff to like and considering the theme constraints, it’s easy to give it a pass. Plus, it sits next to GAG REEL which somehow makes it feel all right.

Impressively designed puzzle with plenty of good fill worked in. Four stars. Oh hey! I think this is a debut. Congratulations on a really nice first grid.