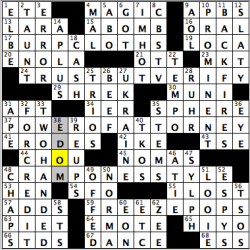 Hello everybody!! Just two weeks until Election Day, and here is hoping that those of who who have voted already did so without any incidents or complications!

Today’s puzzle was one that surely teased the brain, especially since the four longest entries in the grid all were multi-word entries in which the first word — appearing on the left side of the entry — is also a word that can come after the word “brain.”

Couple of theme-related points. First, I had not ever heard of a brain burp before. Maybe I might have termed it something else when saying something out loud before processing fully what the heck my mouth had produced. Second, I immediately put in “slate” instead of SLATY, which then made me think for a second that I had completely remembered Reagan’s quote wrong all these years (12D: [Bluish-gray]). Quick enough of a fix at the end, but still a little trippy of an experience on my end. All of those nine-letter answers in those paired down entries were delectable, unless you’re a one-hand backhand tennis player and normally don’t hit that shot TWO-HANDED (33D: [Like some returns of serve by Serena or Chris]). Started my career as a news reporter, so I definitely was aware of the more-than-decent work from areas of war that LARA (13A: [News reporter Logan]) produced at CBS TV before her hard turn to conjuring up and/or promoting conspiracy theories that she has engaged in over the past few years (8D: [“60 Minutes” broadcaster]). Love the subtle nod to the women of the military in the clue for LOOIE (51D: [He or she outranks the sarge]). Since I am sure that I did use the SWMYS space in a prior blog to talk about the NO MAS boxing match between Sugar Ray Leonard and Roberto Duran (45A: [“Enough, Jorge!”]), where the latter famously was reported to have said those words out loud right before the referee stopped the fight, we’ll take the next graph in another direction…

“Sports will make you smarter” moment of the day: CASH (18D: [Money belt filler]) – The Tampa Bay Rays will play Game 1 of the World Series tomorrow against the Los Angeles Dodgers, and they will be led onto the field by current manager and former Major League player Kevin Cash. He was a seldom-used reserve catcher in his playing days in the Major Leagues from 2002 to 2010, but he caught on quickly in the coaching ranks…like most former catchers do. In 2015, he was hired as the Tampa Bay Rays manager and has led Tampa to the postseason in each of the past two seasons.

Theme: The first word in each theme answer can follow an OPENING BELL (58a, [9:30 a.m. event at the NYSE, and a hint to the starts of the starred answers]). 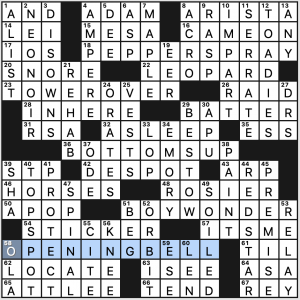 Very traditional word-following-another-word theme, but it works. The theme entries are all in-the-language phrases, and the OPENING BELL revealer makes for a solid PREMISE for the theme.

The 9-letter central entry and surrounding blocks bisect the grid, so there isn’t anything in the way of long marquee fill, but the 7s that are mostly in the corners are good. I especially like LEOPARD, NEO-NOIR, TOADIES, TOP SPOT, and RED STAR. 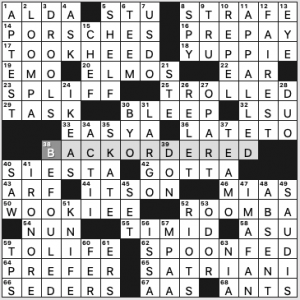 In this alphabetically based theme, words and phrases whose letters appear in reverse alphabetical order take top billing, with the revealer offering a different riff on a familiar term: 38a. [Like goods that are temporarily out of stock … or a hint, alphabetically, to the answers to the starred clues], BACK-ORDERED. The eight starred answers are TOOK HEED, YUPPIE, SPLIFF, TROLLED, WOOKIEE, ROOMBA, “TO LIFE,” and SPOON-FED. It feels like a bit of a cheat to allow doubled letters within this framework—and only one, TO LIFE, doesn’t include any doubles. Half of the themers (the first and last 8/6 pairs) are stacked with additional entries of the same length, which gives the grid the look of an unthemed puzzle.

There are reasons that few daily-sized puzzles contain nine theme answers. Here, those reasons include plural ELMOS, MIAS, and IKEAS; both ASU and LSU (one university abbrev is enough, no?); odd partial US DO; and entries like RELET, FER, and I’M A FAN. I’d like to have seen Jeff execute this theme minus one pair of 6s, likely with smoother fill.

Three stars from me. I didn’t particularly enjoy the theme, but might have appreciated it better had it been enveloped by better fill. I am going to be lazy this week, because I remember this puzzle! Here is my write-up from May 9, 2017:

I got an alert from Matt G. that there was a “super-cute puzzle alert” for this one. I answered him before I started, indicating I had high hopes. I was NOT disappointed! Probably the cutest puzzle I have ever seen. Note the blurb before 1-Across that sets the stage:

Before I explain who the kids are, let me list the thematic entries (and there are six!):

I think we may have some budding puzzle-makers!! 67-Across turns out to be ELLA and 49-Across is his son SID. Needless to say, you should have solved this puzzle with a great big smile on your face. Why? The title calls this “a group effort for Take Your Kids to Work Day!” Awesome concept, hilarious clues, and literally a heartwarming puzzle. I am giving this one the full 5 stars!

I cannot and will not mention every clue, because there are too many good ones to mention and you should solve this puzzle yourself, but these four stand out to me:\

I was thoroughly entertained. It will now be a phenomenal week because of this puzzle!

That is literally what I said 3 1/2 years ago! I echo these sentiments this week, but my time was a minute faster! 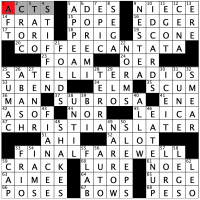 This is one of those easier puzzles that you have no idea what the theme is until you get to the very end. Or is it just me?

Kudos to you if you spotted this theme before the revealer, but I had no idea. I would have never seen those synonyms for “farewell!” But this is a stellar example of how a revealer entry ties the puzzle up into a neat bow instead of just revealing something you probably already know, albeit hopefully in a punny way. Stellar job this Tuesday, Roland! 4.6 stars.

THEME: Grades (A, B, C, D, F) are over the hidden word ARC in each of the themers. Hence “grade on the curve.” 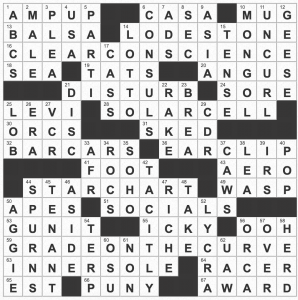 I want to like this one. I really do. But if I’m being honest, that was a rough experience solving in the web app. This is mostly due to Universal’s inability to use circles. Normally, I empathize mostly with new solvers who have to decode and letter count. But this was too much for me this time. The revealer alone is asking the solver to do waaaay too much to figure out the puzzle, imo. And it’s the type of theme that one is more likely to figure after the solve. Simply circling the letter “grade” would’ve made it much, much more enjoyable.

I usually love Paul’s puzzles. But it was hard for me to get excited about this one, even though a lot of work clearly went into the construction (that’s a lot of theme material and constraints!)

I’m not familiar with EAR CLIPs or SOLAR CELLS, BAR CARS feel like a thing of the past, haven’t used a STAR CHART in… forever, and I can never spell the word CONSCIENCE or any of its iterations without it feeling wrong.

The work and the finds that went into this puzzle are very impressive. It just wasn’t for me, at least not until Universal is able to tighten its grids and use circles when it’s called for (coming soon, I’m told?)

3.8 Stars with circles. 1.5 without. This one really needed it more than most to be properly enjoyed.