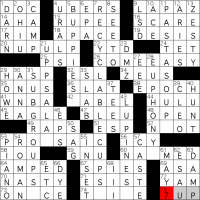 hello and welcome to episode #646 of matt gaffney’s weekly crossword contest, “Rising Force”. for this week 3 puzzle, the instructions tell us that we are looking for a plural noun. what are the theme answers? well, there are two related things going on here. the final across entry is {Soft drink that’s clear, like certain squares in this grid when it’s solved} 7-UP. and there are seven empty squares in the completed grid. each one occurs as the last square of a down answer that includes the bigram UP:

the blank squares occur in these across answers:

so, what now? i really don’t know. the most obvious thing to do would be to look for letters that could fit in those blank squares to spell something sensible, but i don’t think there’s anything you can put into PRO_SAIC or N_OT or NA_MED. nor does it seem like our old friend transaddition (anagram plus one letter) will help here, even though adding a letter is kind of suggested by having those blank squares.

what else is there to look at? well, the UPs are interesting, as they’re suggested by the 7-UP answer and the title. ordinarily i’d be interested in the letters that come either just above or just below the UPs, but my enthusiasm is dampened by the fact that the UP is at the top of UPPSALA (so there’s no letter above) and the bottom of PASTA SOUP (so there’s no letter below). taking just the first letters of the down answers than include UP gives BRPUESL, which looks like it might plausibly be an anagram of a plural noun if we can figure out an ordering mechanism… but in fact, it isn’t. there is nothing that raises my spidey-sense about the clues for any of the answers with blank squares, so i don’t think it’s in the clues.

what else? well, sometimes the thing to do is look at what’s left over if we remove the UPs: BPIES_, RECYCLABLE CS_, PASTA SO_, PSALA_, EHONY_, SUBGROS_, and LINES_. other than the last one, not very promising.

well, i’m stumped. there have been nearly 500 correct answers submitted, so evidently this is not that tricky, but i’m just not seeing it. i really hope the answer isn’t just 7-UPS, because that would be unsatisfying, but that’s what i’m going to submit, because i don’t see what else to do. please let me know in the comments what i missed!