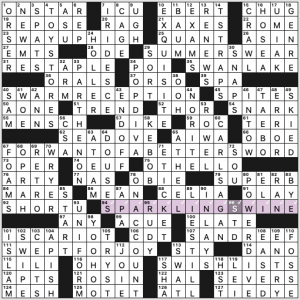 The W-SW theme takes phrases where a word starts with W and makes it start with SW instead:

Theme is OK but the resulting phrases and their clues weren’t quite funny enough to get us over the hump of the Sunday crossword curse, which is that too often there’s just not enough hilarity to make filling the whole 21×21 grid an entertaining venture. But out there in America, there are a zillion people who wait all week for that Sunday puzzle to fill some hours. Me, I’d like the weekly lineup to be something like: Saturday NYT, AV Club, the harder two themeless New Yorker puzzles, Friday NYT, and a rotating assortment of indie puzzles, Inkubator, and sometimes the Thursday NYT. (I really like the sort of fill we see in the New Yorker crosswords. These puzzles don’t usually get very high star ratings from Fiend readers, but I find most of them to be in the range of 4 to 4.5 stars.) If any of those indie puzzles is 17×17 or 19×19 or 21×21, I groan.

But I digress. Seven more things:

I saw the circles at the top of the grid, realized they were abbreviations for March and April, and thought “that’s the theme?” Nope. It’s a bit more complicated than that. The revealer smack-dab in the center of the grid took away any moment of discovery. 68a is [A timely mnemonic, or what the circled letters depict] and the answer is SPRING FORWARD FALL BACK. It’s a solid Sunday theme, made more enjoyable because it shows up the weekend we do fall back. 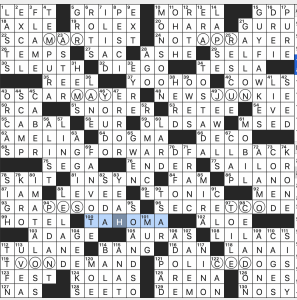 It’s quite a feat of construction. First C.C. had to find words with the relevant months forward and backward. Then she had to arrange them in the grid so the spring months were in the top half and the fall months in the bottom, and get them in calendar order to boot. There are a couple of clunkers in the fill (RETEE, anyone?) and I’m willing to pay that price for a really clever set-up.

What I didn’t know before I did this puzzle: that ASHE Stadium is the largest tennis stadium in the world. I also did not know that Pizza Hut has its headquarters in PLANO, Texas.

After last week’s mind-bender, it’s no surprise that this week is a straightforward theme-type.

THEME: Common phrases reimagined as if they are musical pieces (due to the musical nature of the second word in the phrase).

I was going for time on this one since I started off strong out of the gates, so I didn’t really stop to consider the theme all that much, but I figured it out with LITERARY CANON. That did help me fill in every themer below it (PROTEST MARCH and MOUNTAIN AIR), and later I was able to fill in some missing gaps, especially where I got hung up in the BEN/VALET/LAYERS/IT’S LIT/DILUTE/TINA section.

When I uncovered MOUNTAIN AIR, I had the sense that I’d seen this theme before. And then I remembered this article series written in the NY Times where constructors discussed step-by-step how to create a crossword. The theme they came up with in the article is decidedly similar (MACBOOK AIR, CALL NUMBER, PUZZLE PIECE, TENURE TRACK), but I like the classical nature of Evan’s set. This is not to suggest anything other than a coincidence- that sort of thing happens all the time.

Digging the clue for 78A. I just realized that TRUMP and BIDEN have the same number of letters. I just don’t particularly enjoy seeing one of them any more than I have to, so glad to see the other in the crossword.

Felt very smooth overall though- I typically get hung up on names in the WaPo as Evan prefers to feature those who aren’t constantly getting the crossword treatment, but fairly crossed as always, so no complaints there.

Here is something that’s very worth checking out and in the spirit of this puzzle. It’s a virtual choir that Evan participated in- you can catch a glimpse of him around the one minute mark. Extremely impressive. 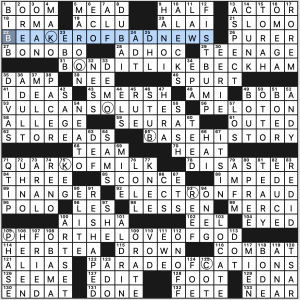 Cute. Some work better than others, and there’s a little bit of a consistency issue. Most of the clues seem rooted in the chemistry lab except for two (BOND and SOLUTES). As someone who never particularly enjoyed chemistry class, those two were more relatable to me, but they felt like a departure from the rest.

As noted in the parenthetical instructions, we’re to read the original (pre-changed) letters in order. Together, these spell REACTION. Nice, thematically-consistent touch. This would have been a good puzzle for the Chronicle of Higher Education, back in the day (i.e. last year).

That’s a lot of theme material, so there isn’t too much in the long fill department. FIST BUMP is great, and I like PELOTON. There’s also STORE ADS, DISASTER, and HERB TEA (I’m used to hearing “herbal tea.”)

Overall, good theme and solid execution in this grid. 3.8 stars.