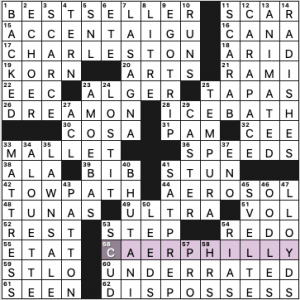 Initial vibe: “Ah, yes, Stella’s a foodie.” TAPAS meet TEMPURA, sushi chefs get various TUNAS, there’s the Welsh cheese CAERPHILLY, LASAGNA, and some RADISHES for crunch. There are worse assortments of ingredients in the chefs’ baskets on Chopped.

I almost dozed off while solving this puzzle because my family stayed up past 2 am last night trying to find a small table we could agree on, as if it makes any sense at all to make furniture decisions at that hour. Don’t do this!

Here’s a music video that has, as far as I know, absolutely no connection to the puzzle. But I know Stella likes 1980s music and so do I. Plus, there are worse Halloween costumes than early-era Madonna. 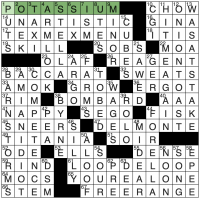 For my two puzzle write-ups today, I get to enjoy puzzles from two of my favorite constructors. For the LAT challenge puzzle, the clever Jeffrey Wechsler has a smooth themeless grid to enjoy. The stacks at the top and bottom have great lively entries in them, and for at least one or two I think I broke into a wry smile! As per the LAT puzzles, there is nothing here that you might not know, except for a just a couple, and the ones I didn’t know I feel like I learned something! And there is certainly nothing wrong with that! Thank you for a pleasant solve, Jeffrey! 4.5 stars from me.

Some high points for me:

That is all for now! Michigan plays at noon today, and I have a ton of other puzzles to do! 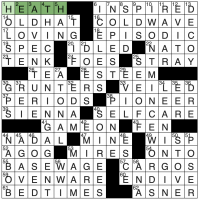 After the Boswords interview last Monday night, I have been able to reinforce my love of themeless puzzles, especially those that leave you feeling totally helpless at the beginning. This is one of those puzzles! I had NO IDEA how to fill out any of this puzzle for what seemed like an eternity. But as I have said before, I found a quiet place to get lost in my thoughts, and peeling the layers of this puzzle was a form of “joyful agony” that I have come to relish. Brad, as was also mentioned on Monday evening, is a brilliant cluer of crosswords, and there are many gems in this one. This is a really tough puzzle, but the satisfaction after solving is almost addictive. A solid 4.7 stars for this brilliant solving experience.

There is a lot to mention, but here is some of it: 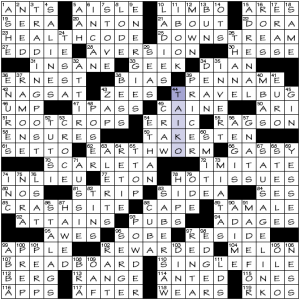 Common words and phrases dressed up in website clothing:

These are rather clever & entertaining. I’ll be sure to leave a Yelp review or something. 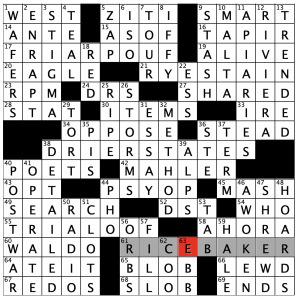 I like spoonerisms, but when they’re in puzzles, I feel like I can never see them until after the puzzle is completed. Especially in this one! I really needed that extra hint in the first themer (unfortunately, I didn’t read it until after I was done, or I may have had a shit at determining theme mid-solve).

Regardless, they were all fun to figure out, even post solve. TRIAL OOF is the only one that seems a little too out there- at least in the comparison with the others.

Fill was just fine! A little DST clue to remind me that it’s ending tomorrow, which causes me IRE. I have no idea why we keep changing the clocks twice a year (I have yet to hear a rational explanation). I prefer lighter later.