As I’m writing this, it’s Tuesday afternoon and no election results are available, so we will press on with our cruciverbial business. 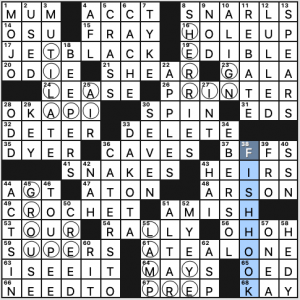 Our constructors have gone fishing today. They bring us hook-shaped groups of circles in today’s grid, and on each hook is a different fish: tilapia, herring, grouper, and lamprey. FISH HOOK reveals all at 38d with the clue [Device at the end of the line, and what each set of circled letters represents]. The title is reminiscent of yesterday’s puzzle and an oblique reference to voting. You did vote, right?

This kind of puzzle doesn’t have a real set of theme answers, and so there’s little opportunity for wordplay or wacky cluing, but the theme definitely helped me fill out the lower half of the grid more quickly. Other than that, it solved like a themeless.

Highlights include JET BLACK, old school BEEPERS, CROCHET, HOLE UP, SHERRIES, DAKOTA, and TOUPEE. I was 90% sure of the name EBERSOL [Dick who led NBC’s Olympic coverage], but I sometimes get him mixed up with Dick Enberg (who, I just learned, passed away in 2017).

Decent theme in this puzzle and it left room for some nice fill. 3.5 stars. 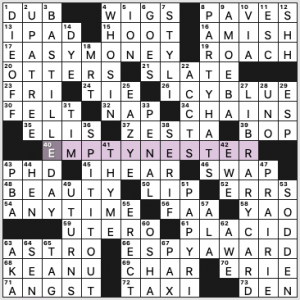 Well, I kinda feel like throwing up, waiting to see election results evolve, so I’ll be quick here. Take the capitalized letters in the theme clues, read those letters aloud so that they sound like a word, add a noun that applies to both of the theme words, and put the sounded word with the noun to get a familiar phrase:

Fairly solid, not your usual seen-it-a-zillion-times sort of theme.

I wish constructors would remove ELIS from their word lists, because there honestly is no reason for anyone who hasn’t gone to Yale to use that term, is there? Some nice long fill: PRAIRIE, LIBRARY CARD, BASTILLE DAY, “SPIT IT OUT.”

Do we consider EASY MONEY and EAZY-E to be a flagrant dupe? I vote yes. 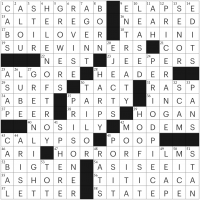 This was a good puzzle.

Ok, fine, I’ll also note that I particularly enjoyed the clues on ALTER EGO [You again!] and HORROR FILMS [Monstrous features?] and note that there is a dupe there with the clue on PERIOD PIECE [Film that might have a high costume budget].

Good luck with the week ahead, everyone. It’s gonna be a long one. 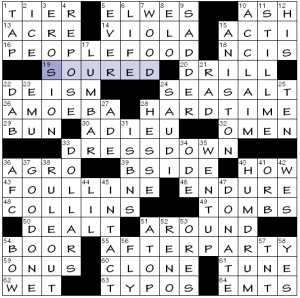 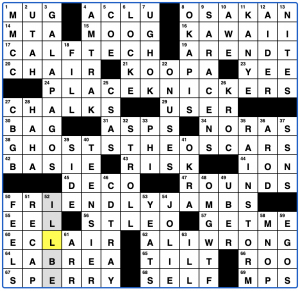 Hello!  It’s a stressful day, and I hope that Francis Heaney’s puzzle for the AVCX gave you a few minutes of relief from that if that’s what you came to the puzzle for.  This one’s called “Silent Partners” and while I may have missed something in the theme, solving this definitely gave me something to do last night when I needed something to do:

This felt straightforward – the “silent” part is the letters (which can often be silent, phonetically) added to otherwise normal names and phrases to make them wackier – CAL TECH, LACE KNICKERS, HOSTS THE OSCARS, FRIENDLY JABS, and ALI WONG all get this treatment.  I’m not sure if there’s something going on for the “Partners” half of the title, but I’m also not sure I’m in the headspace to have caught it.

It’s explicitly not the Wendy Carlos version, but enjoy some MOOG Bach.

I’m leaving things there for now, though I will say that Francis mentioning that “KOOPA Troopa” earworms him with ABBA has now also earwormed me with that group’s “Super Trouper”.  Job well done. 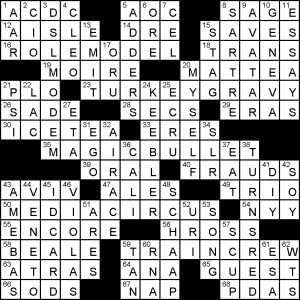 TRAINCREW is not a term I’ve personally heard of. But it seems solidly in use and it functions well as a revealer. This is of course a “words with” theme, and the four trains are MODEL, GRAVY, BULLET & CIRCUS. As such sets go, this is a more colourful collection than most.