Note: Fireball is a contest this week. We will have a review after the entry period closes.

Take a phrase that contains a four-letter word (but not that kind of four-letter word) which can be anagrammed to a common initialism. Put that initialism in the grid, clue it wackily, and you have our theme today. 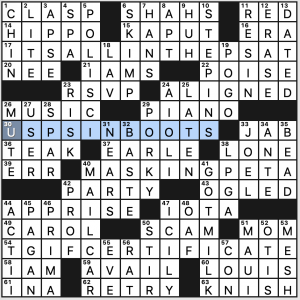 Cute. I got hung up on that first one because I thought it was playing off the phrase “It’s all in the wrist,” but the second answer cleared things up quickly. Some people object to anagrams in a crossword, but I don’t mind, especially when they’re on the shorter side and it’s obvious what they were originally, like in this grid.

POLI SCI, “GOT MILK?”, and MAIL CAR top the fill today. STEP-INS [Moccasins, e.g.] was hard for me to parse, especially since I would normally refer to them as “slip-ons.” KAPUT is always fun, as is KNISH, and I liked seeing LOUIS / PRIMA [“Jump, Jive an’ Wail” singer], even though he’s cross-referenced.

Speaking of Mr. PRIMA, I will always know him as the singer of “Señor Santa Claus.” Back when my sister and I were little kids (1973-ish), that was one of the first records we owned, and we sang along to it countless times. Of course, being kids, it got knocked around a lot and ended up with all kinds of scratches. But that didn’t bother us; it added to the charm. We knew every scratch and skip in the song and memorized it that way. Hearing the song now—without the scratches—is super weird for me, but I still love it (despite the fact that yes, it’s admittedly racist).

I blame *waves hands in the general direction of everything from the last few days of 2020* for why I didn’t pick up what today’s NYT was putting down more quickly.  Let’s explain it in reverse again:

39A: Symbol formed by four crossings in this puzzle — HASHTAG

Four squares in this puzzle can be replaced by the HASHTAG symbol (#) in the grid, interpreted as an = going across, and II going down: 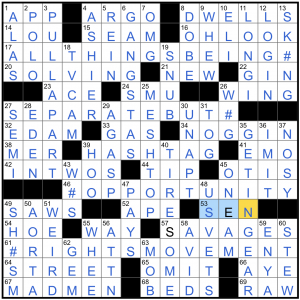 I caught that something was going on with the downs (an SNL Kristen is only going to be WIIG, but with three squares, something had to be doubled up.  I couldn’t see how an answer could end in a double-I, so I kept trying to make WI squares work in the grid.  Apparently I had Wisconsin on the brain.  Even once I figured out that the across squares were equals signs, I somehow couldn’t mentally superimpose the symbols on top of one another to get the hashtag/pound sign.

Happy Thursday!  The end of the week draws close. 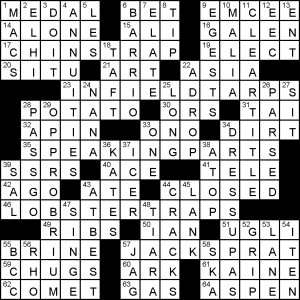 I don’t quite get how JACKSPRAT works as a revealer. Counting it as just another themer makes more sense to me. Five answers’ second parts are words using the same five letters: STRAP, TARPS, PARTS, TRAPS, SPRAT. Not a lot of great entries with TARPS, it must be said.

Could really do without: ADROP and APIN in one puzzle.