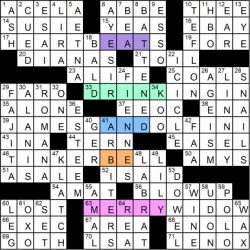 Good day everybody! Hope you all are doing well and are getting ready to enjoy Turkey Day in a handful of hours. I am sure a good number of you (myself included) have had a series of trying moments in 2020, and I so hope the final month and change allows for opportunities to savor the gift of life and all it offers while hoping that 2021 — for those who believe in fresh starts once calendars flip over into the new year — will start on a higher note. Oh, and if you can help it, keep the guest list as short as possible this weekend!

Today’s puzzle definitely rings in the holiday season with a nice little message spelled out in the circled entries of each of the five theme entries. The hidden words end up spelling, “Eat, Drink, and Be Merry.”

In case you’re thinking of Christmas at this time, there’s the clue to COALS to put you in the mood along with the Christmas tree you’ve already put up (25A: [Snowman’s peepers]). I’m a huge fan of both Motown and jazz, so both DIANAS referenced in the clue speak right to my soul (20A: [Singers Ross and Krall]). I like instrumentals more with my jazz, but a huge fan of Diana Krall as well! So we have an on-screen gangster in James Gandolfini and have an actual mob boss in the grid with the context to TEFLON (10D: [“The ___ Don”]). Only real spot of bother was trying to remember how to spell FIENNES (24D: [“Quiz Show” star Ralph]) and initially putting in “keno” for FARO (29A: [Gambling game]).

“Sports will make you smarter” moment of the day: SET (62D: [Congeal]) – Just finished watching the ATP Finals championship doubles match end in a super tiebreak (first to 10 points, with a two-point margin) and that, along with this clue, reminded me that, as of 2019, each of the four Grand Slam tournaments now have different rules regarding a final-set tiebreak. Before 2019, only the US Open had a last-set tiebreak (to seven points) if a match reached 6-6, while the other three tournaments played on until winning by two games. Because of recent marathon matches at Wimbledon (ahem, John Isner), the Australian Open decided to go with a final-set tiebreak to 10 points after reaching 6-6 while Wimbledon decided to implement a final-set tiebreak to seven points after a match reached 12-12. Only the French Open plays on until a player wins by two clear games in the final set.

Theme: The names of certain little critters (mostly insects) are also common words in English. The theme clues ostensibly ask for the birthplace of said critters, but in reality are referring to the non-critter English words. 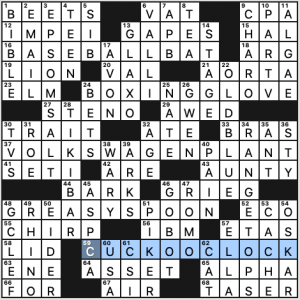 I wasn’t sure why I was supposed to care where a fly is born, but then I remembered the title and that tied everything together well enough for me. No, a slug is not a bug and neither is a tick if you want to get technical about it, but we’re definitely taking liberties with this puzzle, so it’s best not to overthink things. I enjoyed the plays on words, and that’s the point.

TIKI BAR tops the highlights in the fill. RANGE TOPS and EPSOM SALT aren’t as exciting, but they’re solid enough. I don’t think I know OLD BLUE [Classic folk song about a colorful dog]. Let’s check…Nope. Never heard the song, but there have been plenty of covers of it. See below for a nice version I found on YouTube.

And that’s about all I’ve got. Quirky but cute theme. 3.7 stars. 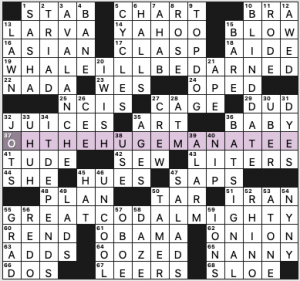 This puzzle’s 16 squares wide, because you can’t jam three terrible marine-animal puns into just a regular-size grid. I did actually laugh at the one in the middle, having seen someone make that exact joke in a Facebook comment the other day. Here are the salty puns:

The theme’s so solid: Riffs on three familiar exclamations. Three marine creatures (two mammals and one fish—can you think of another 16-letter exclamatory pun involving a marine mammal?). One swimmer at the start of the themer, one in the middle, one at the end.

One of my favorite aspects of this theme (besides that it made me laugh) is that there are three themers, leaving plenty of wiggle room for smooth fill with some sparkling Downs (AVALANCHE, “IT DEPENDS,” BLIND DATE, BAT SIGNAL).

Facebook just told me it’s David Steinberg’s birthday… so Happy Birthday, David! I promise not to complain about circles today!

THEME: Words that mean the same thing but are in different languages are found back-to-back in common phrases/names. 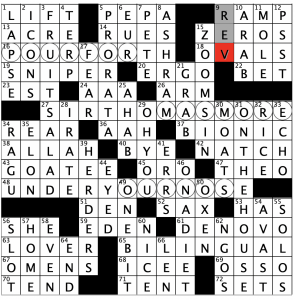 This is one of those puzzles that’s more of a post-solve-chin-scratcher. One that makes you say “Interesting. Very interesting.” But even though the theme conceit didn’t really aid me during the solve, and I had to decipher some odd instructions in the clues, I really found the whole idea fascinating. So it very much worked for me. I like Paul’s puzzles in general. They tend to strive for unique ideas, but still stay within a realm of accessibility. 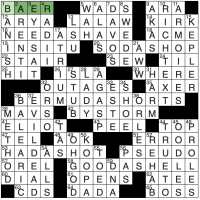 Quick solve today! I’ll take it. Perhaps an easier Jonesin’ for a holiday week? All themers, as the title hints to, contain the letters DASH:

It took me a second to spot the theme, but I was trying to solve with a little pace. Still practicing for the final Boswords puzzle! At this point, I will be happy to not make another silly error. (Left a square blank last week – it still stings!) Again, if this puzzle was in fact a tad easier with a crazy week ahead, I am on board with that idea. Not too many obscure pop culture references this week, but I found a minor one that you either know or you don’t. 4.2 stars from me. 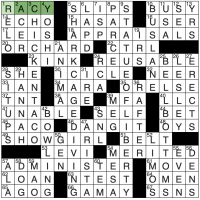 The name Evelyn Rubin was not in the constructor database on this site, so if this is indeed a debut of some sort, congratulations! I do recognize Ross Trudeau’s byline, and this collaboration has a fun theme, with not only a trademark LAT revealer, but with the theme answers going down. There is a good reason!

Ah, this takes me back to when I was under 10 years old. Or to last week when I was watching a YouTube video of an old “Soul Train” line! Surely you are all familiar with Taco Bell, a diving bell, and the Liberty Bell. These pants tried to make a comeback recently; thank goodness they did not! (At least I don’t think so; I am not what you would call a “fashionista!”)