This week, Matt wants us to find a two-word phrase. 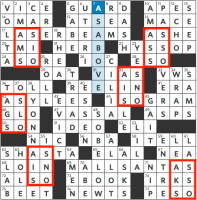 Big hint right there in the center, with two down entries:

It did not take too long to find sets of letters where AS was above SO — with other letters sandwiched in between. Those letters spell out, in grid order, MI SS IN GL IN KS — or MISSING LINKS, which is a two-word phrase and our answer.

I had though the phrase “as above, so below” was from the Bible or something, but I was mistaken. It is attributed to Hermes Trismegistus, the mythic author of the Hermetica, a series of mystic texts written between circa the 1st century BCE and the 4th century CE. The Hermetica, and the portion called the “Emerald Tablet” from whence the phrase in question, had great influence on the alchemists of the Renaissance and early modern European period. Perhaps the alchemists were looking for the missing links from above to below?