Crossword contest announcement! The game website Arkadium has put together a “12 Days of Crossword” contest, featuring a dozen holiday-themed puzzles by Newsday crossword editor, Stanley Newman. The Arkadium site will release one puzzle a day from Monday, November 30 through Friday, December 11. Solve all the puzzles and submit a final contest answer to be entered into a random drawing for a chance to win $3,000. 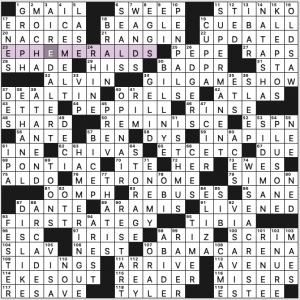 The theme is “before and after”-style portmanteaux that overlap by 6 letters, and there are 6 themers (ergo the title):

The theme is all right, a neat little bit of wordplay but not high on the amusement scale. The four Across themers and four Downs intersect in pairs, which adds to the construction difficulty but not to the solver’s entertainment level. I did find myself wincing at some of the fill, starting with the opening corner’s NACRES/-ENES crossing and popping up here and there in the rest of the puzzle (MAES, PREV, IN E, I-BAR, DYS-, -ETTE, DECI-, -ITE …). Basically, if you put bad fill in 1-Across’s corner, I (and, I suspect, many other solvers) will be primed to notice every other piece of crusty fill in the rest of the puzzle. ICE MELT and ICIER‘s overlap also jumped out.

Bright spots in the grid include BILL NYE, PLUS ONE, VIS-A-VIS, and CUE BALL.

Three stars from me. Over and out. Enjoy your weekend!

THEME: Phrases that substitute one word with a homophone of sorts (one silent letter is added). 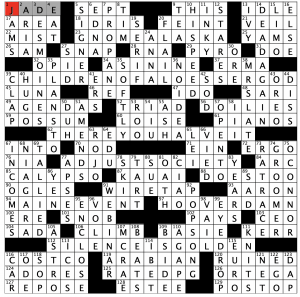 I don’t know why I wasn’t expecting the letters to spell out something – I should know better by now. So the revealer was quite the pleasant surprise. One of those things that puts it a notch above the more “typical” crossword theme-type that we have today.

This one was packed with enjoyment, and is one of those where everybody can say “Ahh!” after a couple mind-benders. Easy, yet all the staples are there: New names, fun clues, and a clever reveal.

New names for me were:

Well… c’mon… if this doesn’t have you curious: [Global ___ Vault (doomsday vault built in Norway to protect Nabisco cookies from an asteroid … yes, it’s true)] OREO. Let’s google that…

Oh wow. It’s real and it’s recent. I mean, more of a marketing stunt than anything, but check this out:

There’s also an explanation of why I can never find anything at Costco at 116A. [Retailer whose system of moving stock around its stores is known as a “treasure hunt” strategy]. There you have it. A time wasting treasure hunt that ends up costing you a small fortune because… the scheme works!

The key to the theme is in the title. 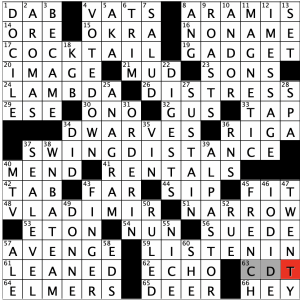 It’s not my favorite thing in the world when a theme answer is split across multiple entries. Unfortunately, I didn’t find the theme or the resulting entries exciting enough to enjoy the search for the other half of two-thirds of the themers.

Grid felt pretty standard, though I tripped up often. IODIDE looks funny to me. I want it to be IODIZE or IODINE or something. AL PASTOR is completely new to me as well, but I never met a taco option I didn’t like.

My favorite mistake was at 4D [Nix, more formally]. VOTE DOWN. I read it as VOTED O??, and went with VOTED OUT, completely missing the lack of past tense in the clue. When I got the correct letters from the crosses, I read it as VOTED OWN, and assumed it was a (very formal!) phrase I hadn’t heard. 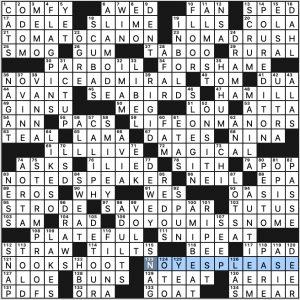 Fairly standard add-a-word theme, but expertly handled. I like the variety of ways in which NO is added.

COMFY is such a nice way to start off a grid, don’t you think? It certainly sets the tone, because Zhouqin is so good at stuffing a grid with nice fill, that doing one of her puzzles is downright COMFY. Look at all these goodies: FLAG PINS, “FOR SHAME!,” POURED IT ON, SEA BIRDS, A LA MODE, SLOE GIN, “LIKE SO,” SMILEYS (I went with SMILIES first), “I’LL LIVE,” STORM PROOF, SAVED PAR, AUNTIE EM, PLATEFUL, and the emphatic statement “AM I BEAT!” That’s a lot to like.

Only a few eyebrow-raising moments: SCUBAS as a verb. I’m not sure I’ve ever heard it without “diving” in there. I didn’t know the name DUA [“Don’t Start Now” singer Lipa], but as she’s a Grammy winner, I’d best learn it. (Interesting, her name re-parses to Dual IPA.)

Very nice puzzle all around. 3.8 stars.

C.C. has a double today – she also has the Sunday-sized Universal. I had no idea what was going on with this theme until I got to the revealer. No, that’s not entirely true – I had an idea early on and discarded it with nothing to replace it. The revealer is down in the SE at 125a, where all good revealers should be. [Field including history, and a hint to the ends of the answers to the starred clues].

The starred clues in my order of solving to explain my first idea: 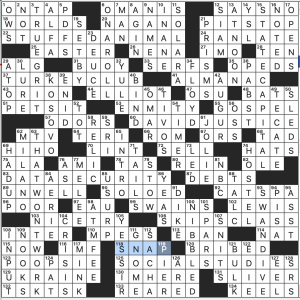 This is a very nice example of a type of theme I generally don’t care for. It adds nothing to the solving experience and doesn’t provide the kind of wordplay I enjoy on a Sunday. That’s entirely a matter of personal taste, and I can appreciate the skill that went in to crafting such a solid, accessible, consistent theme. I was glad to see social CAPITAL and social CLASS show up; both are important concepts that are not discussed frequently enough in US (social) culture.

What I didn’t know before I did this puzzle: I’d never heard of “Ex on the Beach,” apparently a show on MTV that puts former reality show contestants together with their exes to live on the beach and films the results. I thought today’s “Fox Trot” was a parody. Apparently not.

you know someone has this in development as we speak