Title: “Recording Studio Addition”
Prompt: The meta for this puzzle is an 11-letter piece of musical equipment.
Answer: MIXING BOARD 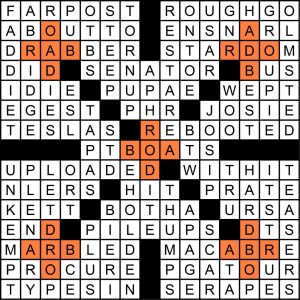 The prompt made me slightly apprehensive since I’m not a musician so might not be familiar with much musical equipment, but I trusted that our meta-maestro wouldn’t make even a December puzzle tough for those of us who don’t play, and indeed that turned out to be the case.

Pete has been going to extremes on his themes this year, with many metas having zero or one theme entries and many others having six or more. Keeping us on our toes! This is a zero themer, though we do get one big hint: 55-Down reads [___ sign (symbol to outline five times to solve the meta)] yielding the answer PLUS. So we’re looking for +++++ somewhere in the grid.

Judging by the pattern of black squares and that we were looking for five of them, I wondered if there might be one plus sign in each of the four corners and then also in the middle, and that turned out to be the case. I quickly noticed that if you make a plus sign in each of those five grid locales, each uses the letters in BOARD.

That can’t be a coincidence, but now what? I Googled musical equipment plus BOARD, and the phrase MIXING BOARD appeared prominently in search results. One of those things you recognize but don’t know the name for (in my case) — that many-levered panel that music producers sit before while the band plays on the other side of the glass, adjusting things to maximize the music.

Figured it had to be right and i sent it in and it was, but I’m still not exactly sure what the wordplay tie-in is. “Mixing” meaning addition, i.e. the plus signs? Or something else? So a pretty clear click though not 100%, so let me know in comments if something went musically over my head (which would not be surprising).

This one played easy for me, but with just 218 correct entries with a few minutes left before deadline, this was a pretty tough one for solvers on the whole.

4.10 stars. Liked it just fine. Reminder that the next puzzle is Dec. 22nd, so I’ll see you back here in a few weeks for that.