I enjoyed this theme! It’s fresh and fun and still Monday-accessible. All the theme answers play on differences between American English and British English. I’m sure the Brits would say theirs is simply “English.” 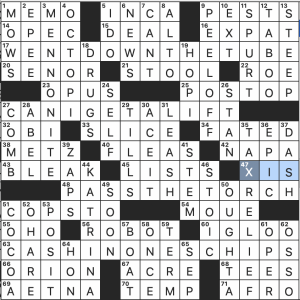 All the phrases are solidly in the (American) language and all the clues are amusing. Nice!

What I didn’t know before I did this puzzle: that XIS follow nus. Hey, I took Latin. 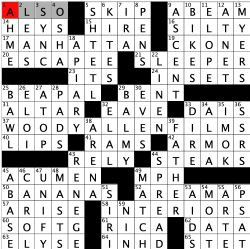 Oh boy. I don’t even know where to start about this puzzle. I can tell you right now I’m not going to say anything about the quality of the fill or how well executed the theme is, because the theme is, as 37A [What the answers to starred clues are (their creator turned 85 this month)] states, WOODY ALLEN FILMS.

We’re cool with Woody Allen now? I’m not. “Innocent until proven guilty” applies in a court of law, not to how individuals deal with each other. Thus, it’s on you and me, and the constructor and the editors, to decide whether someone accused of sexually abusing a child, and who most definitely had an affair with his less-than-half-his-age stepdaughter back in the day, is worthy not only of mention in a crossword puzzle, but of centering an entire theme around. And then everyone should act accordingly.

I, for one, think the allegations are credible enough that I found it incredibly distasteful to solve this puzzle.

Maybe you still like his movies. (I’m not much of a movie nerd; I’ve seen two or three of them and wasn’t a fan.) I can understand that; watch them at home if you like. But pay him tribute in a major newspaper puzzle? WHY?

Theme: Synonyms of TWIST AND SHOUT are found in pairs of well-known phrases. The revealer at 35a is clued [1964 Beatles hit, and a hint to the circled letters in this puzzle]. 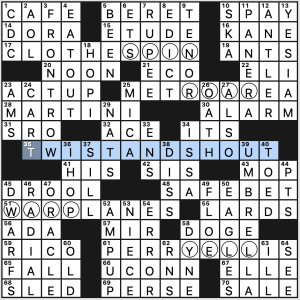 Nothing too fancy, but it works. However, it would be more elegant if there was some ostensible reason that synonyms of TWIST and SHOUT should be hiding in other phrases.

Solid long fill in FRONT ROW, UMBRELLA, MARTINI, and SAFE BET. And the grid is loaded with nice 6s like EAT OUT, PANERA, “YES I AM,” and DWARFS, etc.

It being Monday, cluing was very straightforward, allowing me to clock in at what is a pretty speedy time for me. I did like [Chain that makes a lot of bread] for PANERA and [It goes up when it comes down] for UMBRELLA.

A decent Monday theme and a quick solve. 3.5 stars. 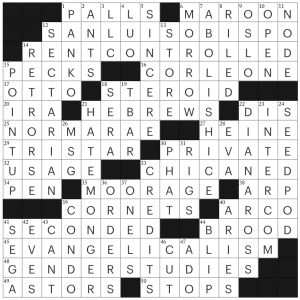 This was a tough one! Possibly my slowest New Yorker ever? The long entries took me *forever*, so it was hard to gain a foothold anywhere. I’m not sure if this is a reflection of the puzzle, or my undercaffeination when solving, or a general decline in my solving skills (aging!), but the challenge was mostly enjoyable regardless. I like hard puzzles, even when I’m bad at them (which I why I played in the Stormy division of Boswords despite DNFing several puzzles this season). I think there were a couple of crosses that I’d call less-than-fair that elevated the difficulty today, and the cluing was often quite tricky, but the mental exercise of finally cracking this puzzle was still darn satisfying.

The long entries today were SAN LUIS OBISPO, RENT CONTROLLED, EVANGELICALISM, and GENDER STUDIES. Of these, the clue on RENT CONTROLLED was very clever and very hard for me [Resistant to hiking, in a way], and I’m not a huge fan of EVANGELICALISM as a word. I think I want it to be “EVANGEL…ISM”, although I gather they have different meanings, in that one is a “movement.” ABOLISH ICE (which I *know* I have seen as a revealer recently and cannot remember where) and HATEMONGER are also solid entries.

Overall, several stars for a satisfying solve! See you Wednesday for a (hopefully) somewhat easier puzzle. 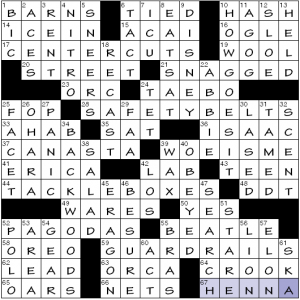 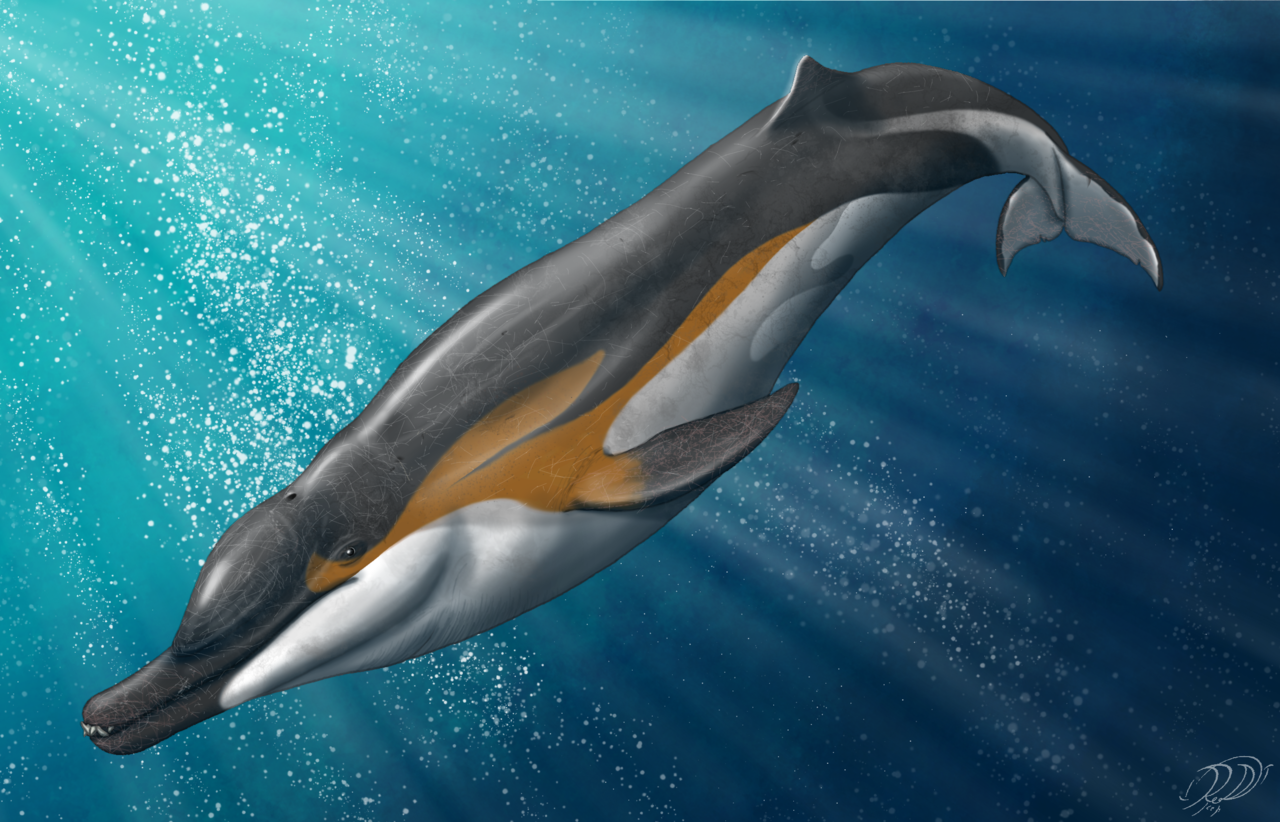 We know some of you have missed the reviews of Brendan’s puzzles. Thanks for the push. I’m serious – I’d stopped doing Brendan’s Monday puzzles and they are so good. I’m glad I did this one. I make no promises about the future, but I have time today, so here we go.

There was a lot I liked in this puzzle! A few of the entries I enjoyed: 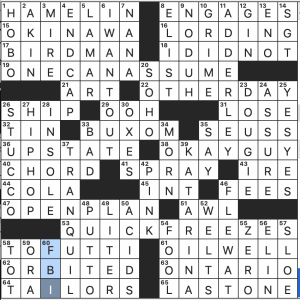 I also loved 35a [Author of a best-seller that used only 50 different words]. I was expecting some odd Modernist writer I’d never heard of. Nope. It’s SEUSS. Hah.

I’m not sure about ELIST, defined as [Tool for some Patreon users]. I subscribe to several Patreons and haven’t heard the term. Maybe it’s something the creators use?

What I didn’t know before I did this puzzle and was absolutely delighted to learn: that the FBI spent over two years studying the lyrics to “Louie, Louie.” I hope they moved on to “Wooly Bully.”