I have a vague recollection of another Jeff Chen puzzle with a Spy vs. Spy theme. *roots around in the Fiend archives* Ah, here it is. Sep 14, 2011. A NYT grid with a SPY in the NW and a SPY in SE corners (and a V in the exact center).

But that’s nothing to do with this one. Here he teams up with newcomer Kathy Bloomer, and they bring us phrases that feature the trigram NME (ENEMY, 39a, [Adversary, and a phonetic hint to trigrams within the starred answers]). 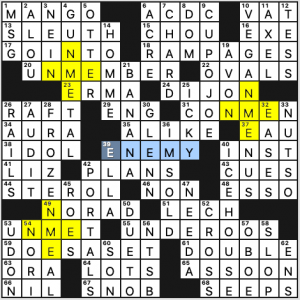 At first I thought that was the whole theme, and it seemed rather ho-hum, especially when one of the themers is the drab UNMET. But there’s a second revealer at 61a [With 52-Down, betrayal, and what’s formed by each pair of the trigrams]. This turns out to be DOUBLE / CROSS, and I thought, “Ok, the trigrams are crossing. Big deal.” But then the penny dropped and I realized these were “enemies” double-crossing each other. Ha! Very nice! I love it when a puzzle has multiple surprising layers. Well done.

CUP O’ JOE and UNDEROOS stand out as highlights in the fill. I would not have recognized ICEHOUSE as a brand of Miller beer, but it’s nice fill, as is RAMPAGES, DIJON, and “I’M SOLD.”

I struggled with STEROL [Waxy compound]. I tried STERNO at first, but that’s a brand name and is comprised of a “jellied alcohol,” not any waxy substance. 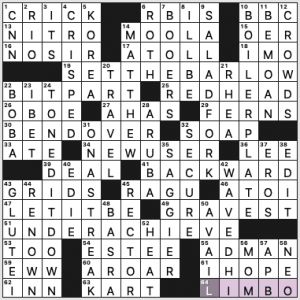 Jeff Chen does a lot of collaborations with new constructors, and this is his second one published today. I did not at all grasp the theme while solving, since I filled in the last Across answer via the crossings. The theme is the LIMBO, 64a. [Contest described by 19-, 30-/41- and 51-Across]. There are three steps, spelled out in the theme entries:

Pretty sure my knees don’t want me attempting to do the limbo anymore.

Fill I liked: TONED IT DOWN, CRISPED (like cookies!), SALAD FORK (tell me why I’m the only one in my household who can distinguish between longer dinner forks and shorter salad forks), BOILERPLATE, LET IT BE (though there’s an IT’S dupe), BIT PART.

Fill I didn’t care for: plural AHAS, AROAR (such a non-word or uncommon word that it’s not accepted in the NYT’s Spelling Bee puzzle, and yet in crosswords all the dang time), gendered AD MAN. 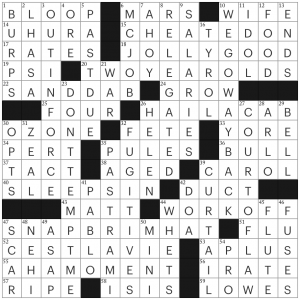 Exceptionally short writeup today as I have to teach in half an hour (!!). This was fun! I enjoyed the long entries, including some A+ colloquialisms, and the cluing was spot-on.

Overall, tons of stars for a JOLLY GOOD puzzle. I’ll be spending 8 hours on Zoom today so I’m gonna go mentally prepare myself for that, see you on Friday. 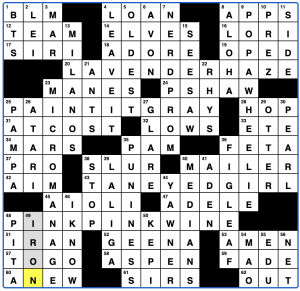 Happy Wednesday!  Today’s AVCX is a debut from Pao Roy!  If you didn’t already read the bio about today’s constructor, I really encourage you to.  IT’s really heartening that the Crossword Constructor Collaboration Directory on Facebook has been an incubator for constructors that want to see a more diverse set of viewpoints in choice of fill and cluing, and equally heartening that the AVCX and other venues have published the work of these constructors.

All this to say: I really liked this theme and grid.  “Muted Tones” was a great title:

I love how this works on multiple levels.  All of the actual songs mentioned (“Purple Haze”, “Paint it Black”, “Brown Eyed Girl”, “Red Red Wine”) feature fade-outs, and all of the colors in the grid have been faded out – purple to lavender, black to gray, etc.

Other things to love in this grid:

Again, a lovely grid from Pao Roy, and I hope to see more from them soon! 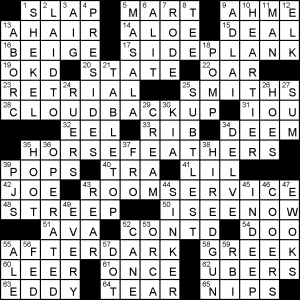 A very basic, old-fashioned theme: AFTERDARK, so SIDE, CLOUD, HORSE, and ROOM can all be prefaced by DARK. With such a basic theme, it is a relief to see unusual theme entry choices like SIDEPLANK and CLOUDBACKUP to spice up proceedings.

There were several ugly moments in the shorter fill: AHME – who actually says that? both COOERS and RUERS are not real nouns.

On the other hand, the clues for MAN (as a collective noun??) and POPS as sounds, were a tad peculiar. 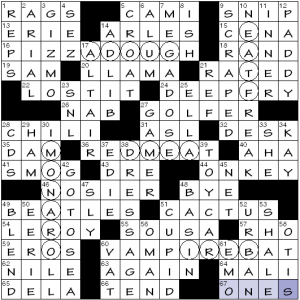 In cryptic style crosswords, ‘shredded’ could function as an anagram indicator, and that’s the  key to understanding this puzzle’s title. Incidentally, I eschew the common portmanteau anagrind because I can’t help mispronouncing it as ‘ana-grind’. (I have a similar problem with ‘co-splay’ which ends up sounding sexual.)

Accordingly, the circled letters in the theme answers can be rearranged to reveal the name of a type of cheese:

This is a nice, solid (soft, semisoft, hard, etc.) theme. Not in any way curdling.