Note: The online puzzle (on the WSJ site) was initially missing all Down clues after 41d. This was rectified within a couple hours, but if you were trying to solve this early, you probably encountered this problem.

Theme: The letters RS are inserted into the middles of phrases. 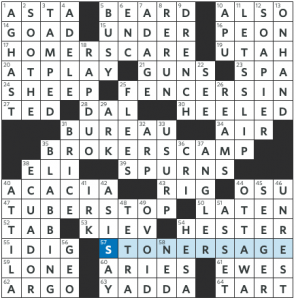 You can tell I wasn’t too keen on this. It starts at the beginning when you realize you have to awkwardly re-parse the title as “Frame RS.” This just feels random, and to me, makes for a clumsy basis for a puzzle. Then, if you’re going to put something in a frame, it makes more sense to me to have it in the exact center every time. Finally, the ambiguity in a couple of the entries was confusing at first (though I did get over it).

What I did like is the consistency with which the R and S were applied in that the R ended the first word in each entry, and the S began the second. And the entries themselves aren’t bad (especially the last one), but the clues just didn’t tickle me.

Moving on to the fill, I like the LETS SLIP and BLABBING pairing, as well as ECUADOR, ACACIA, HESTER Prynne, and “AS I SAY…”

I wasn’t fond of the crossing of ELI and BRICE [Who’s coming, according to a 1969 Three Dog Night hit] and [Funny Fanny], respectively. Not knowing either, that I could easily have been a Y or even a U. The other thorny crossing was CRI [___ de coeur] and RIG [Outfit]. Yes, RIG makes sense, but CRI looks so unlikely. Change RIG to ROT and CRI to CRO, and it’s marginally better.

Today’s NYT (courtesy Jack Murtagh) has an element of surprise in its cluing: 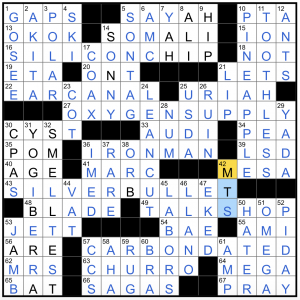 More specifically, each of these clues can be broken into two pieces – a chemical element’s abbreviation, and another clued word to make a phrase that goes with the element.  Break it down this way and everything’s a little clearer:

I thought this was a clever idea that took me a few minutes to figure out how to parse mid-solve.

I spent an inordinate amount of time trying to figure out if “Sound track?” was also a theme clue, but it’s just EAR CANAL.  Its symmetrical partner in the grid, TALK SHOP, not being a theme clue definitely helped resolve that.

Elsewhere in the grid: Given that the clue mentioned “essayist” I tried to make it Susan ORLEAN, but it’s actually Susan SONTAG, and I also liked all the longer down fill: PINEAPPLE, TOOTHLESS, YOGI BERRA, and SMELL TEST.

Fireball 2020 goes out in a blaze of glory. This is a great puzzle – and it was co-constructed by a woman!

I couldn’t figure it out at all last night. The light dawned this morning (so to speak) which doesn’t leave me a lot of time to wax eloquent. That’s a shame, because this puzzle deserves some love. The theme answers are all plays that are squeezed into the grid with two letters in each square. Here’s Peter’s grid – it’s easier to read than mine. 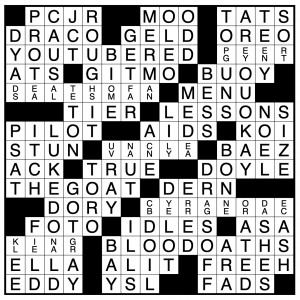 Brilliant. Absolutely brilliant. I figured it out at 17 with PEER GYNT and then saw KING LEAR, which I’d mostly filled in with crossings. Then I solved for the other three by identifying the plays because the crossings were not helpful. Some of that was me – [Stumps] is a perfectly fair clue for ORATES but all I could see was the sense in which the clue stumped me. I also could not see DYADS for [Smallest social groups]. PROTEA, on the other hand, is obscure. They did give us a big hint with [Flowering plant named after a shape-shifting Greek god]. And 47d [Bolts] could have been either RUSHES or the correct DASHES. I’m not complaining – not at all. It was a tough puzzle with a very gratifying “aha” moment.

What I didn’t know before I did this puzzle: never heard of English golfer LUKE DONALD. Luckily I have heard of KING LEAR.

Better keep track of those theme answers if you want to unpack this one! 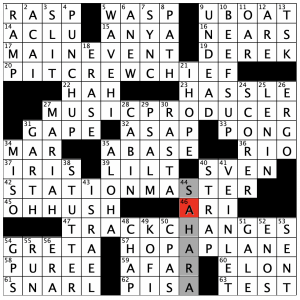 I’m not familiar with Microsoft Word as I haven’t used it in quite some time (since college maybe?), so TRACK CHANGES was a new term for me. It was a fun, if subtle, AHA to note how all of the jobs have their own TRACKs of sorts to oversee, but TRACK in all of its iterations is not a words I’m predisposed to get all that excited about.

Fine, very standard fill. VEINLET was new for me. The dupes in PUNCH UP and BEEFS UP only annoyed me because of the way I solved (I met those two clues back-to-back and was hesitant to enter UP twice).

Other than that, a just fine puzzle!

When I looked at the website, I was confused, because it looked like a normal 15×15. And it is. Each theme answer is a “mini” – a standard phrase with ETTE on the end, clued for wackiness. 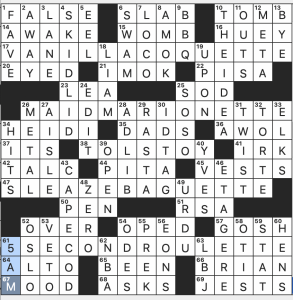 I enjoyed the theme, including the surprise number at 61a. The crossing is [1700s early counterpart], 5 AM. Black Ink accepted the number in the grid, as you can see from my screenshot and that’s what Brendan has on his website.

One little nit: there’s a dupe with [Some require tags] for OUTS and ID TAG. That doesn’t ruin the puzzle for me at all. Fun!

What I didn’t know before I did this puzzle: I’d never heard of HEIDI Garner from SNL or BRIAN Flores of the Miami Dolphins. I was also unaware of the existence of experimental electronic musician YVES Tumor. 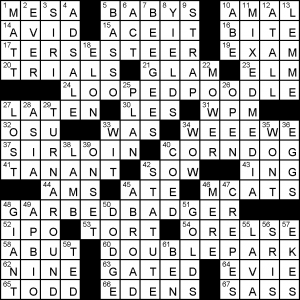 I liked the premise a lot: at the DOUBLEPARK, animals names are DOUBLED, but anagrammed to make wackiness. The execution was a little scattershot: both domestic and wild; plus breeds; plus gender classifications? I feel like this theme was more than broad enough to be tighter and more focussed.

Best clue: [Guitar band] for STRAP. I admire terse clues that are both completely accurate and totally misleading.