Jessie Bullock is Ross Trudeau’s partner in life as well as crossword constructing. This is her NYT debut and it’s a good ’un. I figured out the theme with the second theme answer. It’s fresh and enjoyable and totally Monday-appropriate. I love Ross’s puzzles and now will look forward to more from Jessie! You can see more from both Ross and Jessie at Ross’s website, where he posts a new puzzle every Sunday. And thanks to the commenters who pointed out some significant errors in the first iteration of this post! I managed to not only miss a theme answer but screw up the text of the revealer. Oy. Apologies to Ross and Jessie, and to the commentariat.

Each theme answer is a name: 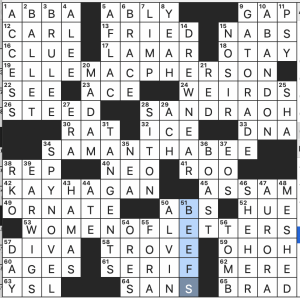 What do they all have in common? The revealer at 53a tells us. [Female scholars…or a hint to 19-, 28-, 34a-, and 42-Across] is WOMEN OF LETTERS. L, O, B, K. Since this isn’t one of Evan’s WaPo puzzles, that doesn’t spell anything – which is fine! A fun theme that will not stymie newbie and early-week solvers.

What I didn’t know before I did this puzzle: see above re: OTAY. I also did not know that  has 13 Grammys and a Pulitzer Prize. In fact, I know so little about him that I didn’t realize his name is Kendrick LAMAR. File this under “things I should know because my daughter is 20.” 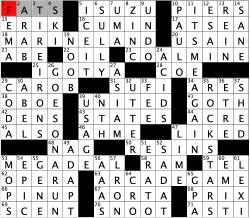 Oh, thank goodness I can go back to reviewing a crossword that’s just entertainment. I clocked in at just over two and a half minutes here, which means I would call this more of a Wednesday than a Monday. Some of what I think contributed to that is a handful of clues that have a couple of fair answer possibilities before I had the crossings. Examples: 32D [Unmitigated], which could lead to SHEER just as easily as the correct UTTER, especially since I had the final R first; 49D [Modify to fit], which could be ALTER; I had the less-justifiable ALIGN for a bit, but it turned out to be ADAPT.

None of this is a knock on the constructor; I do think, though, that either the cluing should have had fewer ambiguities or this puzzle should have run later in the week, at least for consistency with how LAT usually rolls. Oh, wait…it’s also a 16×15, which I did not notice until after resizing the screenshot for this post; that certainly contributed to the extra time, although I think it’s not enough to put me about 25% over my usual for a Monday.

Now, on to the theme. This, too, I think is a bit tough for this early in the week. As a speed solver, about 75% of the time I notice themes only after I’ve finished solving, as was the case here. But if you used the theme to help you solve, I think you might have had more difficulty doing so than on the average Monday.

What’s going on, then? Let’s go to the revealers to find out: 39A [With 43-Across, America … or what 18-, 23-, 53-, and 63-Across contain, briefly], which is UNITED; the linked answer at 43A is STATES. What that means in this case is that the postal abbreviations (“briefly”) of either four or five STATES are joined together (UNITED) to form a word or phrase. So, we have:

I felt like this puzzle had a second mini-theme running through it — see what I did there? — between USAIN Bolt, Sebastian COE, and GOES ON A RUN.

Anyway, fun to solve, if not exactly Monday-easy!

I especially like the title here. All of the theme answers end in homophones of the word RITES. The revealer, and final theme answer, is LAST RITES (61a, [Priest’s duty, and a fitting final answer after 17-, 30- and 46-Across]). 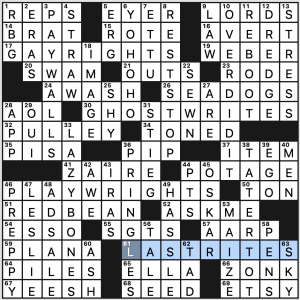 I solved without looking at the theme. Once I finished and cottoned on to it, a glance at the title brought a smile to my face. It was like a cherry on top. This appears to be a debut, so congratulations are in order for a simple yet elegant theme.

Let’s check out the fill. OVER DID IT is good, but LAZY BONES is great. REST STOP, PRINGLES, PAYWALLS, and TATER TOTS are all assets. Oh, and YO HO HO is fun, too. RED BEAN [Legume in a Louisiana rice dish] really wants to be plural, but I’ll take it. And there are also some fun shorter words: REBOOT, ZAIRE, PREPPY, POTAGE, MAIZE, and ZONK. There are the usual bits of kludge—the worst being EYER—but it’s not excessive. 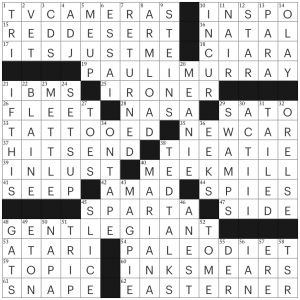 Good morning and happy Monday, everyone! Today we have a challenging Monday puzzle from Anna Shechtman, although I think this may have been one of my fastest New Yorker Mondays on record. I was surprised by how quickly it went, especially in retrospect, looking back at the grid, which has the potential to be a real bear (lots of propers and neologisms). The only explanation I can come up with is that the cluing was more Wednesday than Monday, knocking the difficulty down a bit easier than I’ve come to expect from a challenging Anna Shechtman puzzle. Regardless, I enjoyed this one! It was super smooth, with just a couple pieces of fill I could live without, and I dig the grid design.

The long entries today were mostly settled in the NW and SE: TV CAMERAS, RED DESERT, IT’S JUST ME, PALEO DIET, INK SMEARS, EASTERNER, GENTLE GIANT, and PAULI MURRAY. Again, not sure if the cluing was toned down a notch today, or if this was just squarely in my wordplay + knowledge lane, but most of these fell pretty quickly, even when they had ostensibly tricky clues (e.g. [Soap-making supplies?] and [Fad that’s extremely retro?], both of which I got immediately with almost no crosses). I loved GENTLE GIANT and have a special place in my heart for PAULI MURRAY, who is an utter badass. I’m not 100% sold on the clue for EASTERNER [Resident of the Nutmeg State or the Bay State] — these strike me as EAST coastERs, not EASTERNERs? But then who is an EASTERNER? <insert marcel the shell voice saying “and I say, compared to what!?”>. This is a pretty minor nit and I am very ok with it.

Overall, plenty of stars for a smooth solve and solid long entries. 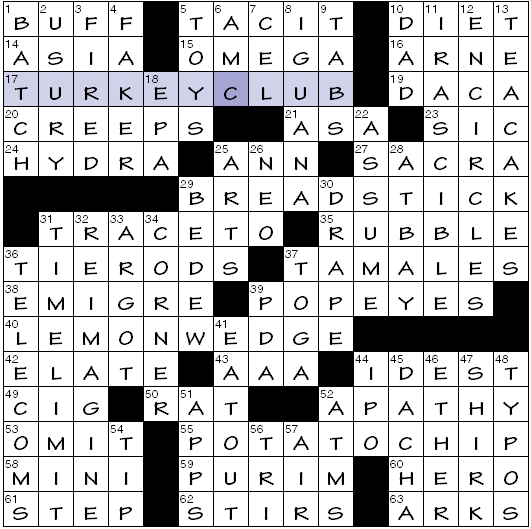 Am going to ASSUME (22d) that Xylophagy was never even considered as an accessible title for this crossword, despite its accurateness,

To be explicit (rather than 5a [Understood yet unstated] TACIT) about the theme, it’s foodstuffs that end in a word that describes an item commonly made of wood. I’m not thrilled by this offering, but it’s solid enough to pass the time nicely.

I was initially a little disappointed to realize this was a medium-difficulty themed puzzle instead of a challenging themeless. Then I got halfway through the puzzle, figured out the theme, and mentally apologized to Brendan for my inner grousing. I loved this puzzle.

Each theme answer has a matching entry elsewhere in the grid. 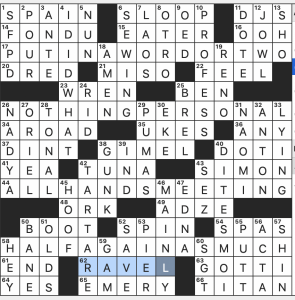 NUN, GIMEL, HEY, SHIN – those are the letters on the four sides of a dreidel. Everyone puts one coin (or chocolate gelt or, in my family, pretzel sticks) into the middle of the circle. Each player spins the top and the letter dictates what they have to do. NUN stands for “nisht,” which means “nothing,” and the player does nothing. GIMEL stands for “gantz,” or “everything,” and the player gets the whole pot. I have no problem with Brendan using ALL for this one. HEY means “halb,” half, and the player gets half the pot. SHIN means “shtel,” or “put,” and the player puts one coin into the pot. If the pot is empty or down to one coin, everyone puts another coin in. Play continues until one player has all the money or your grandmother serves dinner, whichever comes first.

I love that this is a Chanukah theme. I love that the word “dreidel” doesn’t actually appear in the grid. I love that Brendan managed to find four 15-letter entries that work in the theme. I don’t care that YES and YEA both appear. It’s a good puzzle, and it’s more than that. This puzzle makes me feel seen. I solved it over lunch after seeing a patient who told me she hoped Santa would be good to me. I don’t bother to correct people who say  “Merry Christmas.” It’s not worth it. They mean well and I honor the intention, but I’d be lying if I said it didn’t start to wear on me after a while. Being invisible is not easy. I hope someday to see a Diwali-themed puzzle and an Eid-themed puzzle, and puzzles for holidays I’ve never heard of.

What I didn’t know before I solved this puzzle: never heard of BEN Crompton. I also did not know that Tina Fey played a prison guard named NADYA in “Muppets Most Wanted” and I have never heard of the Black PUMAS, who have been nominated for four Grammy awards.