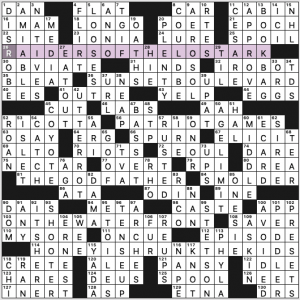 The theme clues are cinematic terms (more or less), and the answers are movies that fit that definition via a little wordplay.

I solved this one off the clock, with dinner interrupting the flow. Seemed to be of about standard Sunday difficulty, I think?

There are some cute clues:

Tougher fill: 110a. [___ Palace, Indian tourist attraction], MYSORE. Difficult for those who don’t know a lot of Indian geography (this is the country’s 50th largest city, you’re excused from knowing dozens of city names within countries you haven’t lived in) or history (it was a kingdom, Wikipedia informs me), and who haven’t eaten at a South Indian restaurant called Mysore Woodlands.

Overall, let’s call this 3.3 stars. There wasn’t a lot of  zip in the fill to offset the Sunday size, and I didn’t feel the sixth themer quite worked.

Looks like we’re averaging 3 themelesses a year from WaPo. I always look forward to these. 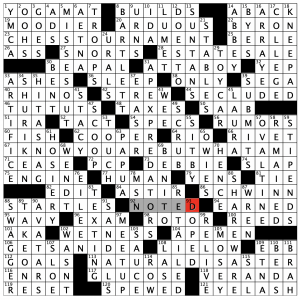 I found the whole grid very easy, finishing under my normal themed time. I only HIT A SNAG once or twice, and solved pretty steadily from north to south. The grid is impressively devoid of short fill; there are just as many 7-letter words as 4-letter words. And there’s almost as many 8-letter words as 3-letter words. And none of it felt like garbage. Names that were new to me like LUMET, LAURA, BYRON were all fairly crossed, as was the Japanese weapon (SHURIKEN!).

No matter what, you’re going to get some “Never-Themeless!” types who are going to be irked by the puzzle. They’re cousins to the “Never-Meta!” types that were miffed by last week’s offering. I’m sure they’ll all rejoice next week for what will likely to be a holiday themed puzzle to please all.

Yesterday it was words at the top, today you need to look at the bottoms. Was the juxtaposition planned? 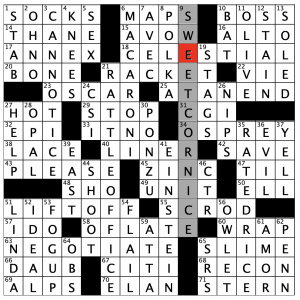 Fun puzzle! Like most of the theme answers, CAN NOTICE being my least favorite because the base word CANNOT lacks the pizzazz of the others, as does the resulting wacky phrase.

New to me: PONZU sauce. I’ll try it!
Puzzle felt somewhat harder than normal, but my time is still my average, so not sure why. I think I just had a tricky time getting started.

I liked this better than the NYT. Each theme answer is a phrase clued as if it referred to a newspaper. I figured it out right away and still enjoyed finding each one. 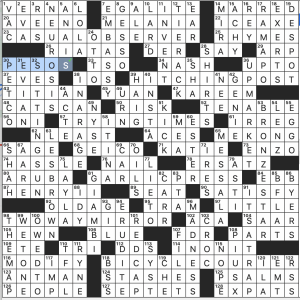 All the theme answers are solid and they all made me smile. It’s a lovely Sunday theme.

What I didn’t know before I did this puzzle: never heard of LOLA Glaudini, was not aware that MESSALA was the villain in Ben-Hur, and did not know that Winona Ryder plays Joyce BYERS in “Stranger Things.”

That’s a pair of “oh”s in the title, not zeroes. Each theme answer is a well-known phrase in which one O has been doubled. As you might expect, there are seven theme answers. 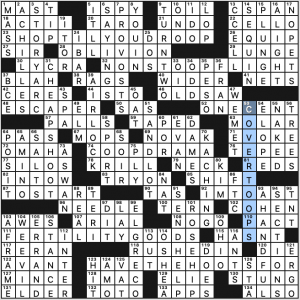 Overall, cute. It would be more elegant if there weren’t extraneous, un-doubled Os in the theme answers, though.

Bottom fill: ESCAPER (not ESCAPEE). Not sure how I feel about A HANDFUL (with the indefinite article), but I’m leaning more toward the negative.

The theme is cute, but I felt it could’ve been clean up some. There’s a lot of great fill here, though. 3.7 stars.