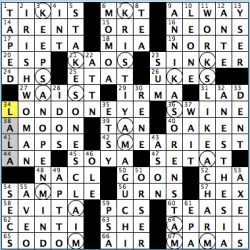 Good day, everybody! Over a foot of snow is projected to hit parts of the Northeast over the next 48 hours or so, so definitely all of you in the path of the storm will stay inside and stay safe, along with everyone else out there reading this blog.

Speaking of staying safe, we have a clever grid in the puzzle in which four 15-letter down entries all feature four circles in inside of it that, when read from the bottom up, spell out the work MASK. The clue to the reveal entry, PSA, explains why one must read the circles in reverse (59A: [Non-commercial ad (such as “Mask Up!” — a COVID-era campaign suggested by the circled letters in the five longest answers)]).

It was such a meaty grid and none of the theme entries felt forced in any way, which might be something that occurs more often than not with five 15-letter entries! Again, another construction to marvel at, and that’s even before talking about the fill and seeing two legends in their respective sports as 40 percent of the theme! Then you throw in some long fill like LONDON EYE (34A: [“Visionary” sightseeing attraction along the River Thames?]) and ANESTHESIA and it surely can take your breath — and consciousness — away (32D: [It’s a real knockout]). Seeing KAOS brought me back to the days when I would watch Get Smart on late nights in its syndication run (21A: [Evil entity in “Get Smart”]). Knowing Liz well is to appreciate the way she weaves her love for figure skating with a couple of entries paying homage to that, like what you see with AXELS (53D: [Jumps perfected by 7-Down and 51-Down]) and…

“Sports will make you smarter” moment of the day: ORSER (51D: [Olympic figure skater Brian ___]) – Since the centerpiece of the grid features a figure skating great around the late ’80s/early ’90s, might as well continue in that same vein, with one of the all-time great figure skaters on the men’s side with Brian Orser. In 1984 and 1988, Orser won the silver medal at the Winter Olympics, losing out to an American each time. In Sarajevo, Scott Hamilton was near flawless in winning the gold. In 1988 in Calgary, Orser began the Olympics with the honor of being the flag bearer for Canada in the opening ceremonies. As Katarina Witt and Debi Thomas had their “Battle of the Carmens” on the women’s side (both skated to Bizet’s “Carmen” during the long program), Orser and American Brian Boitano competed for the gold in what was dubbed the “Battle of the Brians.” Orser, who had finished first in every competition since finishing second to Boitano at the 1986 World Championships in Geneva, ended up finishing a very close second again to Boitano in Calgary. Orser then became a figure skating coach, and he helped guide Yuna Kim (2010) and Yuzuru Hanyu (2014, 2018) to Olympic golds. 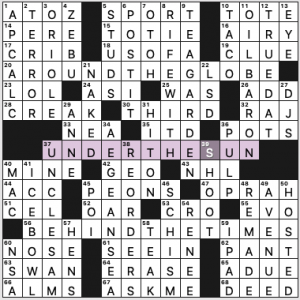 A few weeks ago, I saw a wild Twitter thread basically sorting all the newspaper names into a taxonomy of sorts. I’ll bet some of you would enjoy it but I’ll be damned if I know how to find it again. At any rate, the theme plays on the names of some big-city newspapers:

A 39-square theme leaves wiggle room for sparkle in the fill. I liked POST-IT, “TRUE DAT,” the ICE BOWL (classic bit of Green Bay Packers lore), UNCLE SAM, and a pretty TEA GARDEN (not that I know what one is). It does suggest that there shouldn’t be much iffy fill, and we’re a bit hit-or-miss here. ZEBU, PERE, TOTIE Fields, EVO ([Annual video game competition, for short]?? new to me), and A DUE all feel pretty tough for a Tuesday. Been a while since the ZEBU wandered into a grid, hasn’t it?

ASYMMETRY is the theme, or rather “A” SYMMETRY. The revealer at 62a is clued [Imbalance, or, parsed differently, kind of balance shown by the circles]. Not only do the other theme answers have A’s as their only vowels, those A’s are symmetrically placed within those answers (ignoring implied spaces). 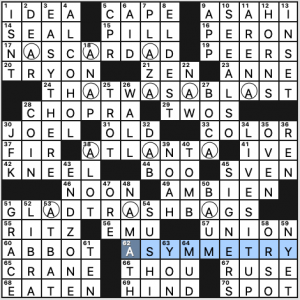 I didn’t cotton on to the theme until after the solve, but when I did I was pleasantly surprised. We’ve seen themes where entries are limited to one specific vowel, but I don’t recall seeing one that dictated the placement of those vowels within the answer. This felt like a novel and interesting approach, and I thought each answer was a nice find, given that there are at least three A’s in each one. Note that ARENA is at 11d but is not considered a theme answer.

Top fill: “EASY THERE,” LIVES IT UP, and END ZONE, with runners up SEE ALSO, ALCOHOL, AMBIEN, NAMATH, and CHOPRA.

Not much in the way of wordplay, but I still found the theme surprising in a good way. Strong fill as well. 3.8 stars. 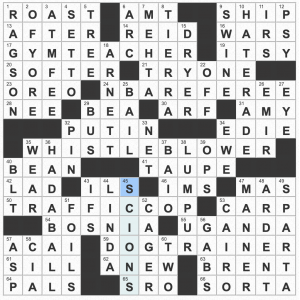 Three of these are very closely aligned with whistle blowing. DOG TRAINER, I think, is the odd one out. I’ve watched a ton of videos on dog training as I’m currently trying to ensure my Great Dane puppy does not destroy my entire house, and no trainer has used or recommended a whistle. Clicker, yes. Whistle, no.

Not that it really matters though. Puzzle was just fine, if a bit trickier than normal. I had a few problems in the Southwest. SCIONS was new for me and I vaguely recalled CAGER from crosswords OF YORE. MAS seems a very awkward plural (Why not just keep it Spanish?), I was unfamiliar with BRENT, and had YAKS for GABS which made UGANDA difficult too. Enjoyed the teeth on this one, though the fill often felt dated (HATERADE being the exception, but even that feels dated in a sense…)

Looks like we’re also trying to avoid Vladmir PUTIN in the puzzle in favor of PUT IN.

Enjoyed the clue for ATM FEE!

Overall, not my favorite. I also solved on the web app, which is awfully clunky and usually gets me frustrated. 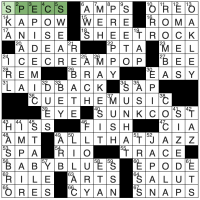 Turn on the radio while you solve this puzzle!

I actually thought the clue might have something to do with the starts of the clues until I actually took a second to read what was going on! Sheet is a term in music, but rock, pop, jazz, and blues are all common genres. That makes more sense! Why do I always try to make it harder than it is? 4.3 star today. 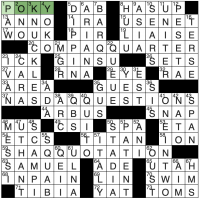 I thought I had made a mistake until I’d figured out what the theme was! Only three theme answers, but you come up with a better one than these three:

The clues are the best, especially that last one! Yes, as the title hints at in a homophonic way, there are double Q’s in all the theme answers. Very entertaining; and a quest for a fourth themer just might bring down the rest of the puzzle. This was highly entertaining, even by Jonesin’ standards! 4.5 stars today.

A few points (nothing too obscure this week!):