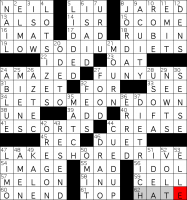 hello and welcome to episode #654 of matt gaffney’s weekly crossword contest, “It Was Forty Years Ago This Week”. for this week 2 puzzle, the instructions ask for a song sung by John Lennon. the title of the puzzle, of course, refers to the 40th anniversary of lennon’s 1980 assassination, which was just observed last week. what are the theme answers? the three grid-spanning answers are all three-word phrases with initials LSD:

by itself, that would be enough to solve the puzzle, but there’s an extra hint (or several) near the bottom of the grid: 61-across is {___ row (area of this grid that illustrates the song title)} TOP. what’s in the top row?

this certainly felt like an easy enough meta for a week 1. i suppose it’s an anniversary puzzle, so it more or less demands to be slotted into the calendar whenever the anniversary arises. even for those solvers less familiar with the beatles catalog, this seems pretty easily googleable. i liked the diamond/lucy/diamond hint at the TOP of the grid (the closest a crossword grid has to a “sky”), as it elevates the standout correct answer to the only possible correct answer (as there are plenty of other beatles songs associated with LSD, admittedly somewhat more weakly), in addition to being an elegant constructing touch in its own right.