Title: “By the Numbers”
Prompt:The meta for this puzzle is the mega-meta for 2020, a song from the ’80s.
Answer: “The Final Countdown” by Europe 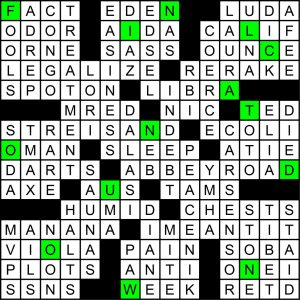 2 1/2 hours until the deadline for the 2020 Muller Music Meta Mega-Meta, and I’m ready to get going. Been holiday seasoning with the fam all day, but now I’m home with a double-shot espresso with a double-shot (ok, maybe a 2.5 shot) of Bailey’s in it so let’s see if I can bring this home in the next 150 minutes.

Puzzle solved, and first thing I noticed is: sure are a lot of numbers in the those clues. When paired with the puzzle’s title this is unlikely to be irrelevant, so let’s take a look…a quick scan shows me that the numbers 1-14 are represented in clues, exactly one time each, so yeah, we’re certainly on the right track. They’re not in grid or clue order, though, so here they are in order of the numbers they contain:

1-A: [“The Beatles have the most #1 hits on the Billboard pop charts,” e.g.] = FACT. Although their greatest song is not one of them.

14-A: [Elton John/Tim Rice opera adaptation that featured a #2 song on the Adult Contemporary Chart (“Written in the Stars”)] = AIDA

37-A: [Nation that adopted Islam in the seventh century] = OMAN.

46-A: [Country with the eighth-largest immigrant population after the U.S.] = AUS. Presumably Australia and not Austria.

31-A: [The Cecil B. DeMille award was her ninth Golden Globe] = STREISAND.

28-A: [Nugent of “Intensities in 10 Cities” fame] = TED. Unfamiliar with this title, but it’s a nice piece of wordplay! And it sounds like he really did use a track from one of each performance on a 10-city tour, so he crafted the format of the album around that wordplay. That’s magnificent.

So the first thing I notice here is that 7 of these 14 use the cardinal number, and the other 7 use the ordinal number. That would be a loosey-goosey thing for Pete to let happen by chance, and the even 7-7 split also leads me to suspect that it’s an on-purpose.

Another thing: Pete gave use 13 puzzles this year, so when I saw that we had numbers 1-14 represented I thought: where are we going to get a 14th puzzle to extract a letter from? So here’s my first thought: let’s use the ordinal numbers for the puzzles (logical, since they end at 13) and use cardinals for the others. And oh wait — I’ve got an educated guess now that the answer is going to be “867-5309” since that’s a seven-digit hit from the ’80s and there’s a lot of 7-digitness already going on! But let’s see what we get…

So that’s AAADWHO, which doesn’t spell anything, but doesn’t look totally random, either. The Who only had a couple of hits in the ’80s, and I don’t see how AAAD related to any of them. Hmmm…disappointing, as I suspected I was on the right track here.

How about this: take the first letter of each of the cardinal entries in the grid and then of the ordinals. This didn’t seem likely since it wouldn’t use the past grids as Pete normally does for the meta, but look: the first five letters of the first five cardinal answers are:

Well! That’s Austrian three-hit wonder FALCO, who had a huge hit in 1985 with “Rock Me Amadeus”!

Surely this must be something…but then the remaining letters are TOEOASAVW, which is….not much. Oh well.

OK, it’s 9:30, so 90 minutes left. Let’s take another look at the whole year and see what else I could be missing. I still think those cardinals and ordinals are important since they’re 7-7 and Pete had many opportunities to not use the cardinals/ordinals in places, so let me give this one more look before moving on to other theories.

Hmmm….nothing panning out. My original idea was so logical and I was sure that was it, and now I’m taking really random stabs at ideas that don’t make much sense.

OK, I phoned a friend who gave me the answer, which I was nowhere close to! Just take the 14 clues in the grid where a cardinal and an ordinal of the same number cross, like the 1-A Beatles clue above with “#1” in it and 1-D which is [April first targets] for FOOLS and get the F, or the I-5 clue for CALIF mentioned above crossing [Fifth-longest bone in the body] for ULNA to get the L. Put those fourteen together (see grid at above right) and you get FINAL COUNTDOWN, which is of course Europe’s epic “The Final Countdown”:

Why such an epic fail for me? Because I forgot to print the puzzle out at the office last week (no printer at home) and so was suddenly stuck tonight solving a meta in Across Lite! Otherwise I dare say I would’ve noticed that there was a full corresponding set of cardinals and ordinals in the downs and not gone on my wild goose chases above. Visual metas are tough on Across Lite! Let this be a lesson to all of us.

So epic fail for me, but thanks to Pete for another outstanding year!